The Backstreet Boys are back with their newest album, DNA 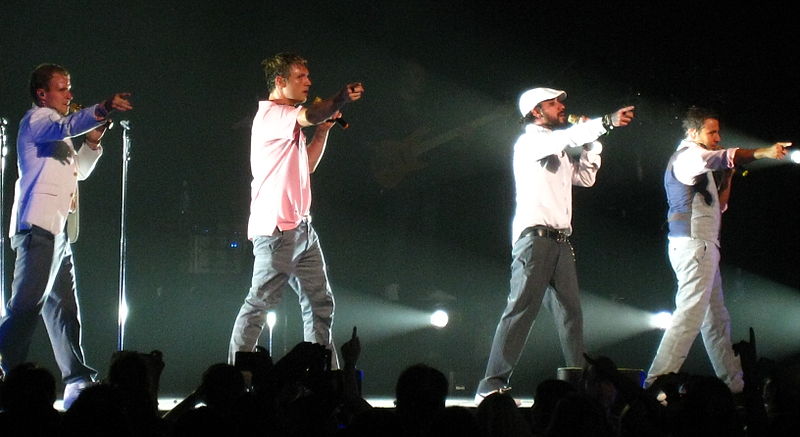 The Backstreet Boys point to the crowd at a 2008 concert. Courtesy of Anirudh Koul through Flickr, acquired through Wikimedia Commons

When people think of the ‘90s, they remember their beloved boy bands– Boyz II Men, Take That, NSYNC.

And, of course, arguably the most successful of them all: the Backstreet Boys.

This talented group created classics like “I Want It That Way” and “Everybody,” and their versatile voices easily switched between a cappella and synth-pop.

Ah, yes, the Backstreet Boys. Most people believed them to be just that: part of the classic set of cherished memories of the 90s. But here’s the news: they’re back.

The Backstreet Boys (BSB) are back after five years with the release of their newest album, DNA, on January 25. The collection has been well-received, earning them their first Grammy nomination in over fifteen years and earning the title of “Pop Hit” from Billboard.

BSB combined elements of country and R&B with their iconic a cappella-pop combo to create the unique 12-track album that’s been so popular. The synthetic beat that’s prevalent in today’s music is also a main part of their track’s background music.

As one of the many who forgot the Backstreet Boys were still a band, I was eager to see whether or not it was worthy of praise, and it did not disappoint. BSB used their five years off wisely to create an album that combines all the best parts of their boy-band identity and introduces some new styles to their fans.

One song that especially stood out to me was “Chateau.” The song showcases the singers’ range, particularly their falsettos, through an a cappella scheme supported by the synthetic rhythm in the background. The a cappella helps convey the raw emotion in the song, which discusses lost love. Love might be an overused topic in today’s pop, but the Backstreet Boys managed to put a new spin on it.

Another song, “Don’t Go Breaking My Heart”, is a return to the group’s classic boy-band pop. The style and tune of the song make me categorize it as a combination of Nick Jonas’ Jealous and Taylor Swift’s Delicate. The song embodies everything pop is: upbeat, flashy and catchy. The music video for Don’t Go Breaking My Heart has great choreography too, if you’re a fan of tasteful music videos. This one is definitely my favorite of the album.

Overall, the Backstreet Boys have broken out of their “just a boy band” persona and explored new styles of music with DNA. You definitely have to listen to it if you’re into 90s pop and Britney Spears. Even though I’m not a pop person, I found that DNA packed a lot of talent into just twelve songs. It’s definitely worth listening to.