When Students Don’t Have a Bus 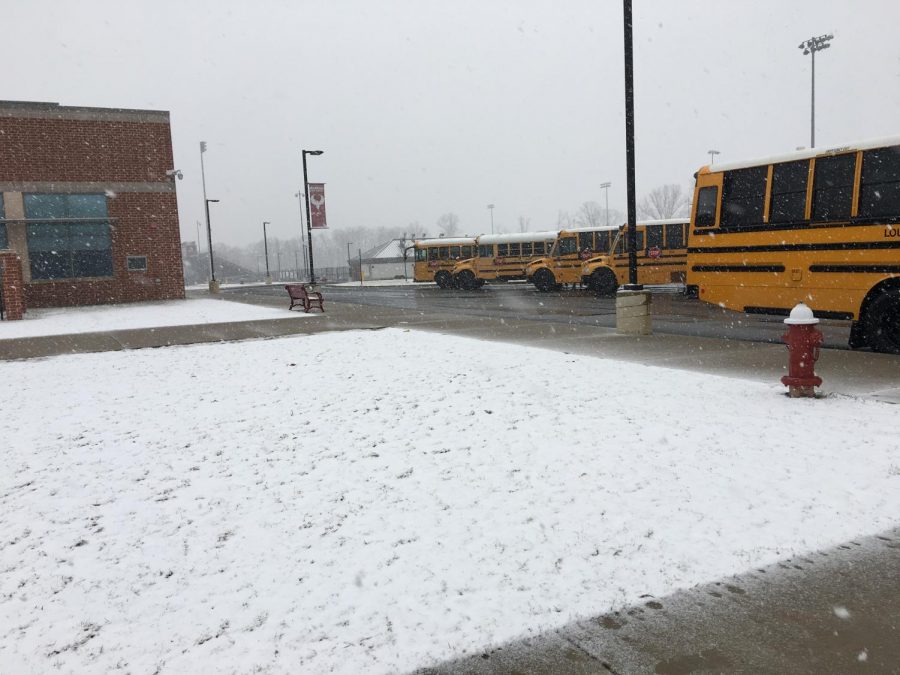 Oftentimes, when students from Loudoun, Prince William, or Arlington don’t have a bus, they must find themselves other transportation. Pictured above is a Loudoun bus station just after snow.

Imagine the following scenario: torrents of snow flurries falling from all directions, blinding white outside your window. Prince William, Loudoun, and Arlington counties have canceled school, and only one remains as Fairfax decides to stay open, rendering all Jefferson students from these neighboring counties without a bus. Since each county provides their students transportation to and from Jefferson, and with their residing county canceled due to weather-related conditions, these students must now find a different way of getting to a school anywhere from one to two hours away.

Junior Joshua Boisvert lives in Prince William County. When asked about how he gets to school when his county has no school, he responded that he carpools with the closest neighbors to him. However, he does face some issues with this method.

“It’s kind of strange because our county doesn’t have that many people going, so in order to find carpooling they have to live within ten minutes of you,” Boisvert said.

When students live more than ten minutes away from each other, it is hard to coordinate their meeting place to find somewhere accommodating for everyone. Finding drivers can also be an additional challenge.

“One parent drives there and one parent drives back … if that happens, then the parents will both suffer from loss of time at work. But they’ll probably make up for either by going in earlier or going in later. And with a 2-hour delay, it’s usually only one parent and we just ask around to find a parent that can. It’s not too much of a deal, just a little bit of a hassle,” Boisvert said.

Technically, these students are granted an excused absence, but missing a school day can result in several negative repercussions. Missing an entire day of instruction equates to losing invaluable information taught in lessons that can be difficult to relearn or self-teach. On the other hand, missing exams means students must now make them up on their own time. This often results in missing 8th period activities, JLC, or having to yet again find transportation to stay after school. Not only this, but without school, the day is a loss of productivity.

“When you’re home, it’s kind of like you’re doing nothing. And when you’re here [at school] you’re actually doing something,” Boisvert said.

However, living in a different county with few people from Jefferson is not always a disadvantage. Students often develop strong friendships with others from their county.

“We’ve been really close, even before carpooling. Since we’re such a small group we tend to form bonds really quickly, and we tend to have some things that we call from our bus,” Boisvert said.

On the other hand, some students from other counties move after acceptance to avoid the whole transportation debacle, and have the convenience of a shorter commute.

“Although the drive is a little bit difficult sometimes, it’s not too big of a deal because eventually you’re going to be able to get done.”

Moving is no small sacrifice either, so it is not surprising that many students make the compromise of these long commutes.

This transportation debacle extends far beyond the weather; the distance from TJ also makes it difficult to stay after for extracurricular activities.

“I’ve been swimming for two years. When I started TJ, it wasn’t too difficult finding time for me to swim because since I get home later than most people, they started practices for my age group earlier. And it’s hard for me to make those practices unless I get off the bus really fast. This year, I’m not able to do that because of the fact that the timings don’t work out and it’s both in the morning and the afternoon. So, both ways don’t work because they meet around four or five in the evening, and then at around six or seven in the morning,” Boisvert said.

When asked about he thinks should be done, Boisvert thought TJ should take a different approach to school closings than other Fairfax schools.

“I feel that there should be when TJ should have a separate closing policy that way they can accommodate students in different counties because it is very hard to get to school if your county is not a part of FCPS,” Boisvert said.

Overall, students from other counties experience both pros and cons when it comes to transportation. While a separate closing policy may benefit these individuals, they also chose to come to Jefferson on their own accord, in spite of the commute. Jefferson’s unique collection of students from all over Northern Virginia contribute to its very culture, reminding us to continue cultivating this diversity.