After preparing for two months, Jefferson students came out on top. 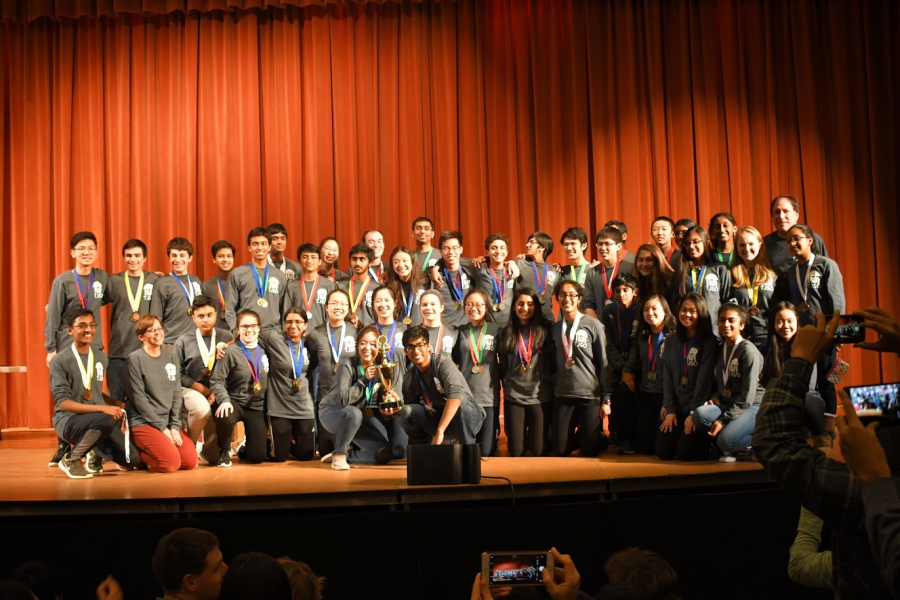 Jefferson students in Charlottesville competed for Science Olympiad and are seen here at the awards ceremony.

The Jefferson Science Olympiad team was a finalist of the Charlottesville Regional competition this past Saturday.

“We started preparing for regionals sometime in November or December, since that is when we had to register for the tournament. As captains, we made sure that everyone was on task, turned in all of their forms, and kept us updated on their study/build progress,” senior Rachel Eom said.

Rachel Eom is a co-captain of Jefferson’s team, along with senior Vikram Arunachalam. When asked about Jefferson qualifying for the state competition, Eom conveyed that qualifying was a sort of given.

“Qualifying for the state tournament is something that happens every year– plus this year we attended a tournament that was less-competitive,” Eom said.

Sophomore Vagul Mahadevan, a Jefferson student who has been participating in Science Olympiad since third grade, echoed a similar sentiment.

“I personally didn’t feel anything about qualifying for states since Jefferson goes to states every year, but I was happy about how well we did collectively,” Mahadevan said.

Mahadevan could sense the apprehension in the air, while at the competition.

“If anything, people are anxious about their upcoming events or how they performed in the ones they finished,” Mahadevan said.

Eom, on the other hand, while being aware of the anxiety around her, also took note of how fast time went by.

“Time flies. You’re immersed in studying and practicing for the events, so there’s not really much time to waste,” Eom said.

Out of a total of fifteen teams and nine different schools, Jefferson came out as one of the top five who will be advancing to states in March at the University of Virginia.

“As of now, we are preparing for the state tournament, where the competition will be even more rigorous,” Eom said.