Behind the Avant-garde collections of Spanish 2 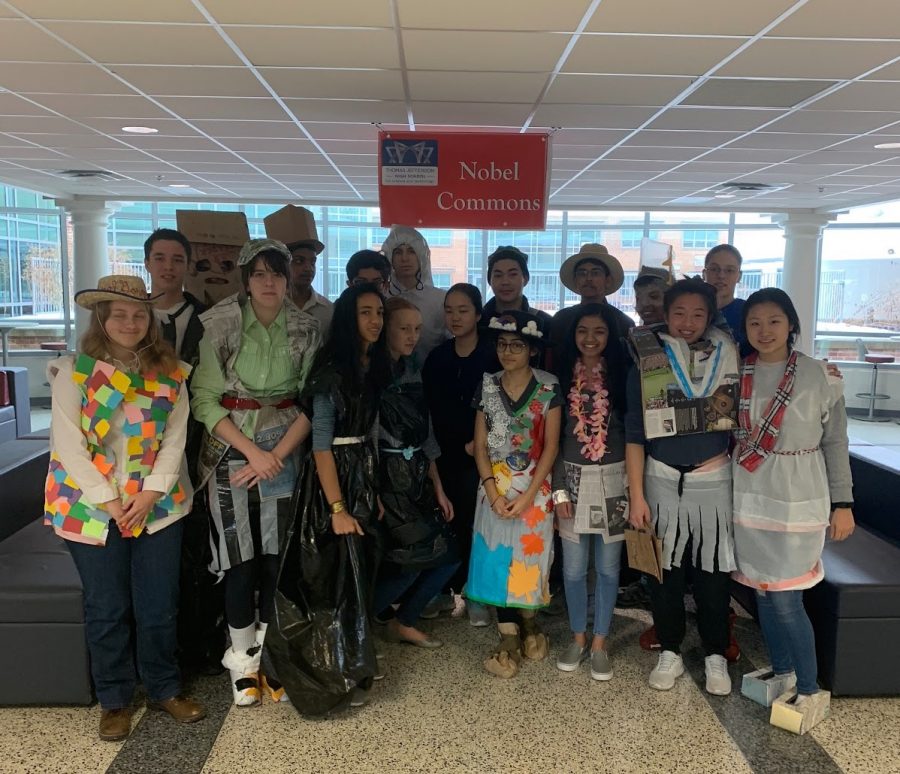 Señora Gendive’s 5th period class poses for a picture after presenting their outfits.

A new wave of fashion hit the runway of Señora Gendive’s Spanish 2 classes on Jan. 18. As part of a culminating unit project, each student was tasked with creating an “ecological” outfit. Such an outfit consists of natural fibers, recycled materials, and other items that show appreciation to nature. In addition, they prepared a monologue and background music as they strutted down the walkway in their outfits. As a final touch, students voted on the most creative outfit, the best overall performance, and the most ecological outfit in each class. Señora Gendive specifically tailored the fashion show to be “ecological” when she started teaching at Jefferson.

“I have always done a fashion show in my classes in all the schools I’ve taught at. But like TJ is a school concentrated on science, it occurred to me to change the focus of the project. I looked for examples on Youtube and found various, so I started the ecological fashion show,” Señora Gendive said.

Each collection was unique, but many shared a common thread of materials such as trash bags, newspapers, and grocery bags.

“My outfit was made of plastic garbage bags. My inspiration was that I wanted to create an environmentally friendly outfit that still looked nice and professional,” freshman Arya Grayeli said.

Students found it hard to come up with inspiration for their projects at first. Some students simply looked around for spare materials and designed an outfit based on them while others drew ideas from the media.

“It [the outfit] was a dress made of newspaper, tape, plastic bags, with black shoes. I just thought of what kinds of dresses are trendy right now and some random outfits I’d seen on celebrities, as well as the videos Señora Gendive showed us and combined it with some ‘DIY’ videos I’d seen a while back,” freshman Nora Fareeha said.

Students describe the preparation prior to presenting as stressful, but the day of the show as lighthearted and fun. Gendive hopes for students to connect Spanish with the materials they learn in other classes, similar to how IBET functions.

“I want the students to use all their talents to make the show and to see the relationship between their other classes and their language.” said Gendive.

As for the lasting effects of the fashion show, students felt that this project went beyond being just an academic experience.

“I don’t think the teacher had us do the project just for the unit. The unit is to help us in life, it’s not just an academic unit. It helped me improve my daily vocabulary and we all learned to understand grammar and speak better. However, since many memorized their presentations, it didn’t help with conversation skills.” Daniel Frank said.