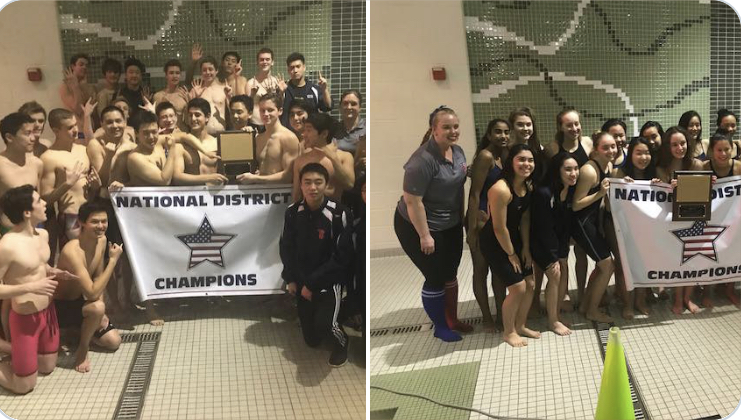 The accolade affirms the effort that each athlete put in throughout the season, which began in early November. Practices occurred nearly every weekday while one meet took place each week.

“Winning districts just proves to all of us how much potential we have as a team. Working hard the entire season and racing hard Friday nights seem like actions that are validated through our performance at conferences,” junior Philip Pan said. Pan swims the 100 and 200 meter freestyle competitions.

“Swimming is really big in Northern Virginia so we always have a lot of year-round swimmers coming onto the time. More experienced members of the team know how it works and can help out the newer swimmers,” sophomore Natalie Martin said. Martin primarily competes in the freestyle and butterfly strokes.

In addition to winning the district championships several years in a row, both Jefferson swim dive teams have not lost a meet against a local high school in more than two years.

“TJSD has been successful mostly because it has a competitive tryout system so everyone on the team is pretty fast to start off with. Additionally, everyone tends to swim the events that they are best at so we can maximize the points we win,” senior Tiffany Zhang said. Zhang dives for Jefferson.

Based on the swim finals, Jefferson had 39 regional-qualifying times as well as four others that made the state cut.

“We were generally quite confident that we would exceed throughout the entire season. At times we would have bad races and performances, but we always had a clear end goal to win states in mind and that is what we have and will continue to work towards,” Pan said.

The team will attempt to build upon this victory as it heads towards regionals and ultimately, the state championships.

“Winning districts is a victory for us, but it hasn’t been our main goal this season – our boys squad won States last year, so our eyes are on regionals this week and ultimately states in mid February,” junior Jay Misener, who swims in the 200 and 500 meter freestyle competitions, said. “We’ve worked super hard this year, but we’re not even in our true taper form yet and won’t be until regionals and states.”