Keep calm and curry on 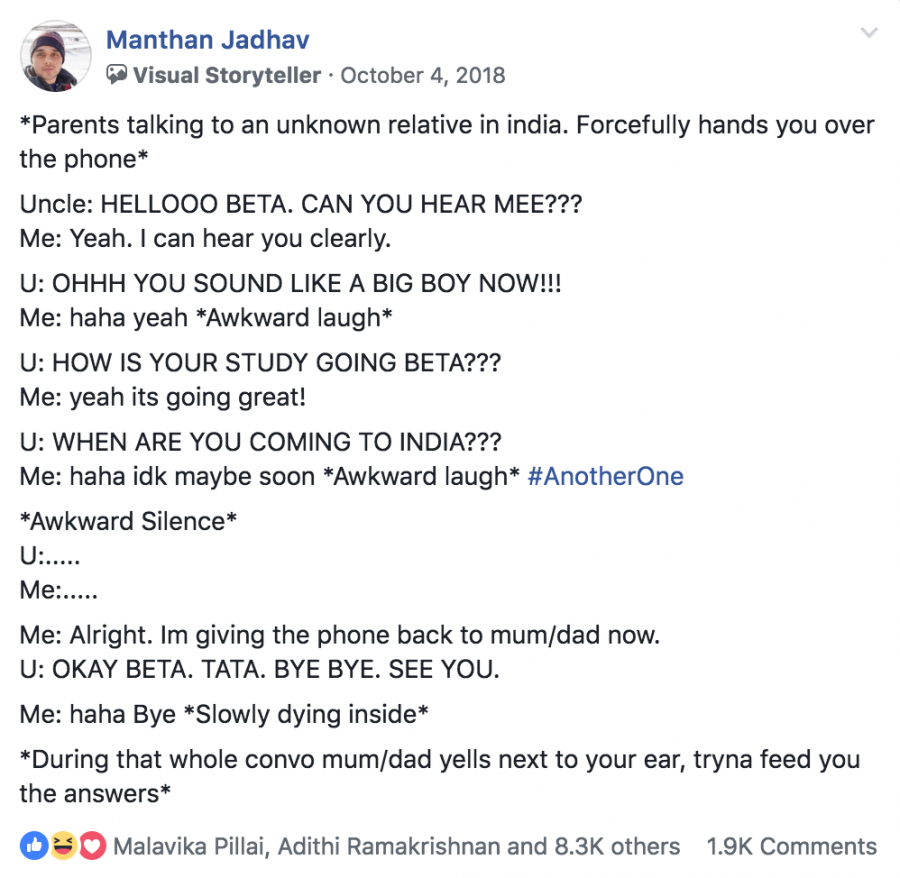 The phenomenon Subtle Curry Traits has taken the Indian population at Thomas Jefferson by storm. The facebook group garnered popularity due to its posts being relatable to the average young adult or teenager. Most of the posts are by members of the group and go through a selective process to be presented to the almost 270,00 members of the group. With an average of 20 new posts per day, the group has filled Jefferson students’ feeds with memes and pictures and allowed them to connect on another level. Junior Malavika Pillai is a member of this group and believes it to be a small representation of her experiences.

“I can definitely relate to a lot of posts in that group, but I wouldn’t say that subtle curry traits is entirely representative of my experiences either,” Pillai said. “What I think the group is good at doing is picking out things that people think only they experience [or] observe in their families and highlighting them with memes.”

Although it may seem as if the group is filled with mainly those of Indian heritage, there is a good amount of people from other races who have not only talked about the content, but have also contributed to it. The question is, however, if this contribution might be considered appropriation in the eyes of the Indian members.

“Oh, most definitely. I wouldn’t say it’s a problem because it’s our human nature. Because I’m also in subtle asian traits and I think that I also appropriate their culture to myself because that’s just how we roll,.” junior Roshini Raghuram said. “We don’t stick to our own and I think that’s actually a blessing and not a curse because it’s more diversity and more embracing other peoples cultures rather than cultural appropriation.”

Although the culture seems quite specific, it is often intertwined with other cultures which makes it harder to judge what can be deemed racist or what is just enjoyment. Senior Athilesh Thanigai is a member as of three weeks ago and can relate to the confusion about the distinction of the intention of posts.

“Indian culture is a very broad thing, it encompasses a lot of things, but the memes in this group are specifically about a certain type of people and about very first world problems,” Thanigai said. “You know there are a lot of memes about AirPods and things like that and so the reason that we Indian people like to look at that is because we can relate to it. But if someone doesn’t have all the background of an Indian person they would just be confused or wonder why that is Indian culture.”

Aside from issues like cultural appropriation, the intent of the group is to spread Indian culture and provide relatable content to many Indians who have faced similar situations. Junior Pranav Somesula talks about one of the many posts that has stuck out with him. [shown below]

“I like it because it feels so relatable,” Somesula said. “Every time I get handed the phone from my mom or dad, it’s literally like that because [my extended family] lives in India and since Indian families are so big, I don’t remember some of them.”