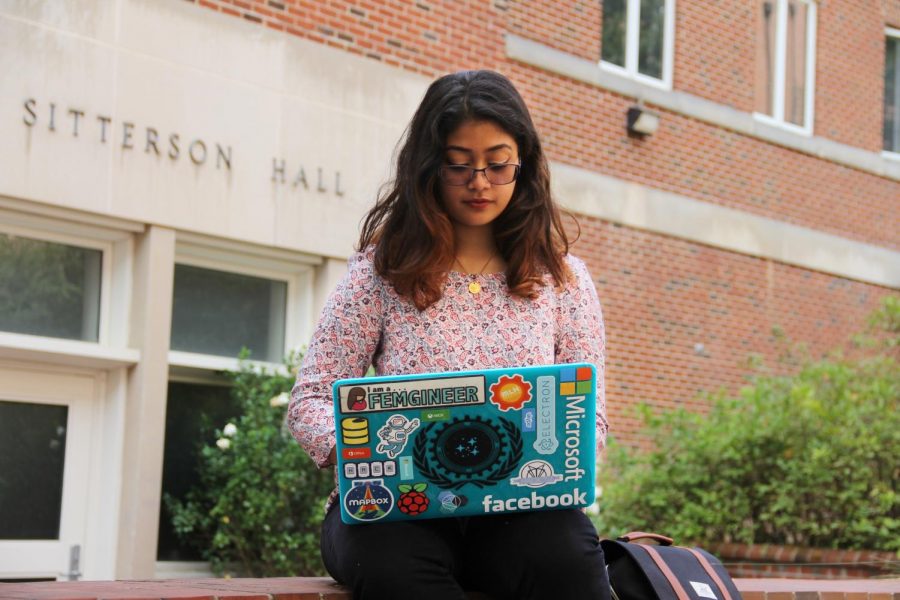 Jefferson Class of 2016 graduate, Sweta Karlekar, is working on her laptop outside of Sitterson Hall on the UNC Chapel Hill campus.

In one way or another, almost all of us were well aware of the academic rigor of Jefferson before we had even set foot inside the dome. Still, thousands of students from all over Northern Virginia choose to apply to Jefferson and around 480 are admitted and choose to attend. But, why? Despite the rumors, why do so many people continue to show interest towards Virginia’s highest-ranked public school? We asked a few of Jefferson’s graduates about their experiences here, where they are now, and how the rigor and challenging atmosphere of Jefferson impacted their lives in the future-both mentally and academically.

Many students entering Jefferson are used to being at the top of their class, never struggling for a good grade or an award. Although it may be hard to accept, once entering Jefferson, the strenuous environment can definitely take a toll on some students academically, physically, and mentally. In addition to the atypical pressure put on most students, many are faced with the uncommon challenge of failure. Accepting and learning from failure is difficult, especially when you are not used to it. Class of 2014 graduate Kenneth Hau, who now works as a telecommunications networker, believes that his time at Jefferson helped him learn to accept defeat, a lesson that was hard but necessary to learn for college and the future.

“Another aspect of humility was learning to lose. I’ve had my fair share of bad tests, rejection letters, missing out on opportunities I should have taken,” Hau said. “TJ taught me to hold on to my failures as long as they teach me, and then to let go.”

For some, overworking themselves as a coping mechanism to move on from failure is a recurring tendency. However, Hau continues, learning to not jam-pack your schedule and taking time to relax was also an important lesson he, and many others, learned along their high school journey.

“[I learned] to treat mental stamina as a contested resource. There’s a time to take a break, to settle in preparation for another day,” Hau said. “Especially for those chasing academia, there’s a lot of opportunity for burnout, and you might not think it’ll hit you until it already has. Knowing what you personally can afford to give is important too.”

The “TJ experience” does not end after descending down from that stage senior year, diploma in hand, nor does it end when you enter the hallowed campus of an esteemed university. In fact, for many, including Class of 2016 graduate, Sweta Karlekar, college is where Jefferson’s value became apparent. Karlekar, who is the author of four published research papers surrounding neural networks and the applications of artificial intelligence, reminisces about the stress of Jefferson, but also the platform it gave her to succeed in college.

“While you’re in the classes [at TJ], sometimes it seems like the rigor is like unnecessary,” Karlekar said. “But actually, when you come out of it, you realize the amount of knowledge that you’ll possess after you graduate and how that differs from other high schools. The advantage that it gives you in college is really important.”

She later elaborates on the life lessons you gain from Jefferson and how they benefit you in college and beyond. In four years, our illustrious school manages to give us skills and an ability to get through trying times that will last a lifetime. Karlekar now views Jefferson as a beneficial experience overall and remembers the emotional strength she built during her time there.

“I remember at the start of freshman year, I would get so overwhelmed with everything going on, I felt like crying so often,” Karlekar said. “But, just going through years of TJ, I feel like I found a bittersweet comfort in the sheer amount of work, learning to embrace the challenge, and eventually carried that ideal into college.”

Jefferson alumna Revu Pillai, currently a pre-med student and co-founder of The Imagination Project, shares what Jefferson has given her, but also realizes that the education, while creating a strong base for a future education, still pushes its students to seek out more information.

“While I learned a lot about managing my time and handling obstacles in life at TJ, there was a lot left to be learned in college, especially with getting over involved as an undergrad,” Pillai said.

Current William and Mary student, Tara Prakash, notices how the courses offered at Jefferson, while they may come under the guise of a high school course, actually match or exceed the rigor and amount of knowledge college courses provide.

“Especially the science classes, such as DNA science, you learn a lot about lab techniques, so when I was presented with them in college, I was familiar with them,” Prakash said. “Even higher level biology classes [in college], I still remember information that I learned in high school on a test or in a lecture. In general, TJ definitely prepared me for the science classes in college.”

As many may agree, Jefferson is a rigorous environment. Spending around 40 hours a week at school along with 20 to 30 hours doing homework can definitely be mentally and physically draining. Despite this, the strong foundation and community Jefferson provides for its students make it worth all of the effort.

“In spite of the academic rigor, I thrived in a really unique way in this environment. Everyone was brilliant in a different way. Whereas I might have initially seen that as part of a competitive environment, I ultimately came to see the school as a unique incubator for learning from and sharing with others,” Hau said.