Splashing into the Scene: Aquaman 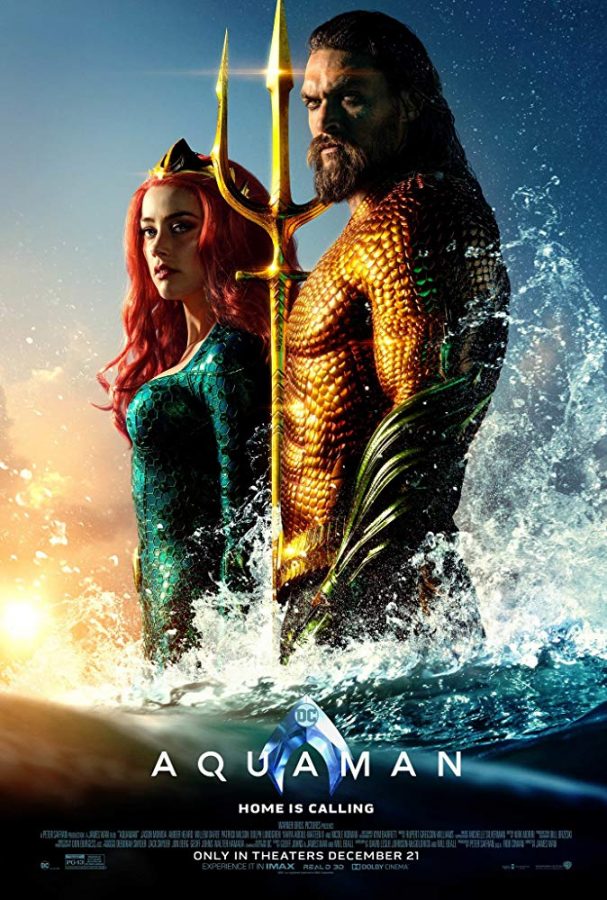 Aquaman, a superhero movie from the DC Universe, was released in theaters on Dec. 21, 2018. Photo courtesy of IMDb.

Aquaman splashed into theaters on Dec. 21, 2018, bringing with it fun action scenes, likeable characters, and stunning visuals. Though it wasn’t anything groundbreaking, many viewers still agreed that Aquaman was a step in the right direction for DC Universe.

In case you haven’t watched it yet, Aquaman is about Arthur Curry (Jason Momoa), the half-breed son of lighthouse keeper Thomas Curry (Temuera Morrison) and runaway princess of Atlantis, Atlanna (Nicole Kidman). Soon after Arthur’s birth, his mother, Atlanna was forced to return to Atlantis in order to keep her shoreside family safe. Consequently, she was executed for having a half-breed son. Years later, Arthur embarks on a mission to stop his half brother, King Orm (Patrick Wilson), from decimating humanity, after his hometown is hit by a huge tsunami sent by King Orm.

With a very basic “Chosen One goes on adventure to save home” plot, Aquaman unfortunately lacked heavily in the storytelling department — it had a predictable storyline, and a majority of the plot twists were straight out boring. Atlanna surviving her execution was a given: in every story similar to Aquaman’s format, the supposedly dead parental figure of the protagonist almost always turns out to be alive.

Moreover, the characters were certainly likeable, but they weren’t interesting. There was Arthur, who fulfilled the basic “unwilling but still brave and determined hero” role, Mera (Amber Heard), who played the basic “strong, beautiful romantic interest that is inherently smarter than the hero”, King Orm, the “greedy for power king” and the list goes on.

Despite all of its flaws, Aquaman still manages to do pretty well for itself. From the very start, we see some exciting cinematography flitting around the action scenes from all angles and grabbing the audience’s attention immediately. The final battle between Arthur and King Orm was a great watch too. Well choreographed and filmed, all of the action scenes in Aquaman were a treat.

Arguably the best part of Aquaman, however, were the special effects and setting of the movie. Each kingdom in Atlantis felt unique and beautiful in their own ways, and it was impossible to take in every detail at first. The grandeur of the underwater cities was breathtaking. Apart from beautiful underwater cities, the scene with the billions of Trench monster bearing down on Arthur and Mera as they traveled underwater was absolutely terrifying. The flickering red light in the midst of the vast sea of monsters gave off a wonderfully chilling ambience. Overall, Aquaman was pure eye candy.

As an action movie, Aquaman was fantastic. However, viewers looking for a plot that will keep them on the edge of their seats might be somewhat disappointed. Regardless, Aquaman was an important step forward in the movie industry for all.