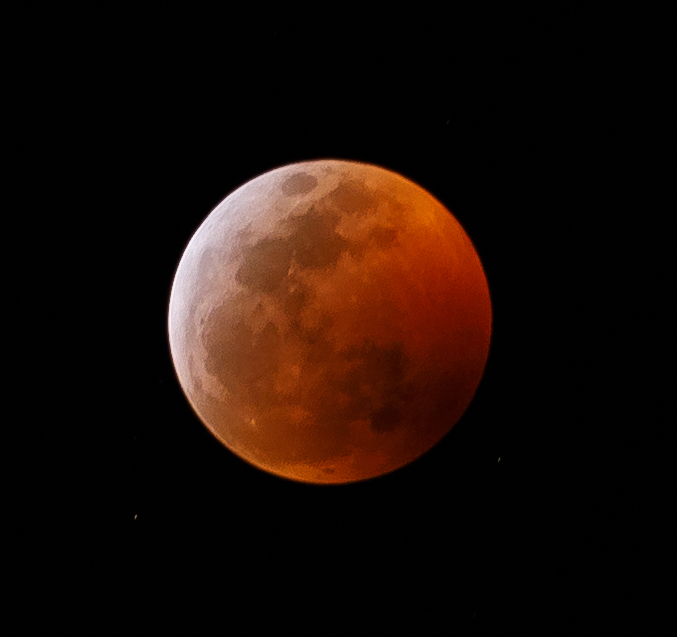 The Super Blood Wolf Moon Eclipse, approaching totality in this photo, appeared on Jan. 20 as the first lunar eclipse of the year.

Last weekend, millions of people in North and South America as well as Europe and western Africa were able to witness the Super Blood Wolf Moon Eclipse of 2019. During the latest hours of Jan. 20 and the earliest hour of Jan. 21, the entire process was visible from start to end.

This event was the first full moon, lunar eclipse and supermoon of 2019. During the eclipse, the moon was described to appear reddish-orange in color from the sunlight passing through the earth’s dusty atmosphere as its beams were refracted towards the moon.

“I had a smartie once that was half soaked in water, so it lost some of its color to become orangeish and was kinda bumpy. That is what the moon reminded me of,” freshman Sharvani Kondapally said.

“The moon was very pretty and cool, it was also freezing outside though. For some students like me who stay up late on a daily basis, going outside to watch the blood moon was a nice change, ” freshman Lily Walters said.

Not only was the eclipse taking place in below freezing temperatures, but there were some other minor weather issues.

“I saw it. A bit lackluster because the moon was covered by a bit of clouds during the maximum viewing time but it was really amazing,” freshman Lynelle Chen said.

The moon usually receives light from the sun; however, during a lunar eclipse, the moon is located at the most central and darkest side of the earth, which is the side that is directly opposite to the sun. During this time, the sun, moon, and Earth are nearly aligned perfectly.

Apart from watching the moon itself, some lucky viewers also witnessed a flash of white – what is believed to be a meteor hitting the moon in the middle of the eclipse. According to National Geographic, scientists are currently working to verify this event. If it is confirmed, this will be the first time a meteor that has hit the moon during a lunar eclipse has been caught on camera.

There were many rare events that occurred within the same hour of the Super Blood Wolf Moon Eclipse of 2019. Despite the unusual string of events, viewers were amazed simply by the moon’s change in color.

“The lunar eclipse was a truly magnificent sight to behold. It’s hard to believe that this happens only once every few years,” freshman Ramya Griddaluri said.