New singers and a new sound

While some of the covers in The Greatest Showman Reimagined are beautiful, others don’t measure up to those in the official soundtrack. 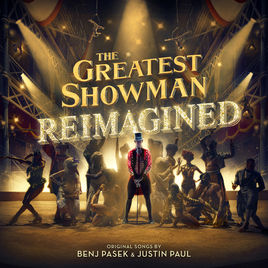 The soundtrack of the hit musical movie The Greatest Showman returns with a gold cover and bold new renditions. Photo courtesy of iTunes.

“A Million Dreams” is one of my favorite songs in the album, and P!nk’s voice is perfect for the song. While she brings the same uplifting emotion to the song, she’s the only one singing, so the song sounds considerably different than the original. Nevertheless, her version is beautiful and is one of the better songs in the Greatest Showman: Reimagined. Another beautiful rendition is “Never Enough” by Kelly Clarkson. Many of Clarkson’s songs are deeply emotional, such as “Piece by Piece” and “Because of You”, so her voice naturally suits a song like “Never Enough”. I love Clarkson’s music, and when I listened to “Never Enough” I was not disappointed.

One song that I didn’t like as much was “Rewrite the Stars”. While they both have nice voices, James Arthur and Anne-Marie turned the song into too much of an everyday pop song on the radio, and their voices didn’t blend together as well as Zac Efron’s and Zendaya’s. I also didn’t feel as connected with their voices. Another song that I didn’t really like was “This is Me”, which is my favorite song from the official soundtrack. The only part of the song I liked was Keala Settle’s, because she sings with passion and I could feel the emotion in her voice. Kesha’s addition to the song was completely overshadowed by Settle’s powerful vocals, and Missy Elliot’s rapping sounded completely out of place.