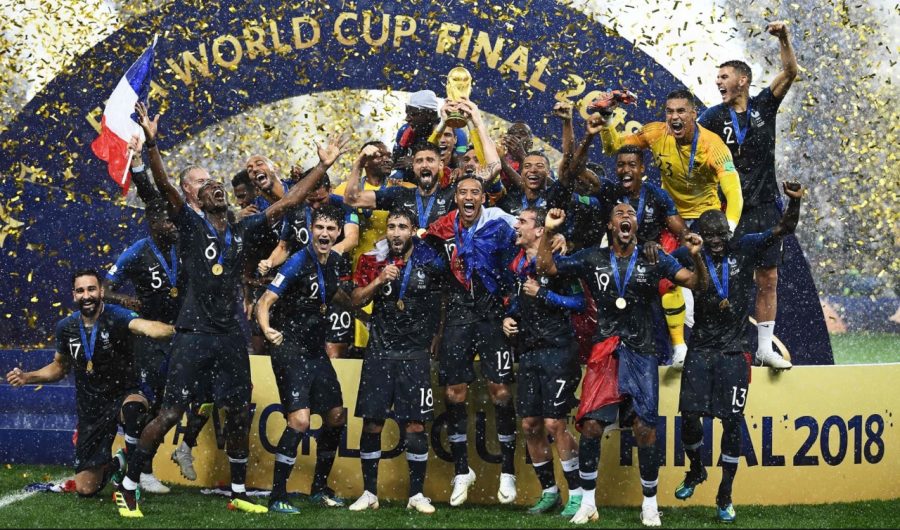 Following a disastrous experience in the 2014 World Cup, Australia desperately hoped to win its first match of the 2018 World Cup to redeem itself on the global stage. To do so, however, Australia would have to defeat former quarterfinalists and 1998 World Cup champion, France. The game proved to be a fierce battle for both teams and early into the second half, France had an excellent goal scoring opportunity, but blew it when an Australian defender slide-tackled the French attacker from behind sending him down. Though the referee initially continued the match without any warning, moments later, the referee ran to the sidelines, reviewed the play through a monitor, and shocked everyone when he awarded France with a penalty kick, which Antoine Griezmann successfully converted. The penalty was the first use of Video Assistant Referee (VAR) in world cup history, which provided everyone with an insight into how VAR would work from now on. Just 4 minutes later, in a stroke of luck, Australia was awarded with a penalty kick and successfully converted it tying the game 1-1. Though Australia ultimately lost the match 2-1, the match showed how any team could hold out against a global soccer power (France were the heavy favorites of the match with 11-1 odds in its favor).

Former world cup champion, Germany, was off to a rough start after they lost their first game to Mexico and barely won against Sweden, scoring the winning goal on a free kick in the 95th minute. To advance, Germany just had to tie the Koreans, assuming Mexico would defeat Sweden. On the other hand, Korea was desperate for a win as well, as they narrowly lost both games against Sweden and Mexico and needed to defeat Germany by at least a margin of 2 goals to advance to the Round of 16. However, the Germans were the heavy favorites and were expected to easily beat the Koreans. The game began with neither side gaining enough momentum for a proper attack, and the game was filled with missed chances on both sides. With the game nearing to an end, both teams were beginning to lose hope until South Korean center back Kim Young-gwon unexpectedly scored on a corner kick in the 93rd minute. However, the assistant referee called offsides cancelling the goal. Just moments later, however, head referee Mark Geiger overruled the decision with the use of Video Assistant Referee (VAR) citing that German defenders Toni Kroos and Niklas Sule both played the ball to Kim before he scored. Down by 1, the Germans sent their defenders and even goalkeeper Manuel Neuer up front, leaving the goal completely undefended. Midfielder Ju Se-jong won the ball off of Neuer who was on the other side of the field amidst the German attack and passed it to midfielder Son Heung-min who successfully scored in the 96th minute and ended Germany’s hope of advancing to the Round of 16. Korea’s historic 2-0 win against Germany shocked the world as they sent the defending champions home. The match was Germany’s first loss to an Asian team in the world cup, and it was the first time Germany failed to qualify for the Round of 16 since 1938.

Germany and Mexico have faced each other three times in previous world cups, all of which resulted in German victories. The Germans were the heavy favorites going to the match, though it was clear that Mexico wouldn’t go down without a fight. Mexico lost to Germany in the semifinals of the FIFA Confederations Cup a whopping 4-1 just a year ago and were eager for revenge. Less than 2 minutes into the game, Mexico was already on the attack and pressuring the German defense. Though Germany had a 61% ball possession and twice as many total shots and shots on goal, the Germans failed to stop Mexico’s rapid counterattacks. It soon became clear that the Mexicans capitalized their opportunities and made the most out of every attack, taking advantage of Germany’s slowness. Eventually, in the 35th minute, center midfield Hector Herrera slide-tackled German midfielder Sami Khedira and regained possession of the ball to begin Mexico’s counterattack. Center forward Javier Hernandez soon had possession of the ball and passed it to left wing Hirving Lozano, but not before dribbling past German defenders. Lozano, now just meters away from the German goal post, juked Mesut Ozil and cleanly placed the ball into the net, putting Mexico up 1-0. The Germans were expected to win the match, but Mexico’s sudden and unexpected win was completely unprecedented and shocked the world, leaving everyone wondering who would advance to the Round of 16 from Group F.

Two-time world cup champion, Argentina, was up against Iceland premiering in its first ever world cup match. The entire world was watching Argentina, a nation eager to redeem itself after finishing in 2nd place in Copa America back in 2015 and 2016. In the eleventh minute, Iceland had a golden goal-scoring opportunity as left wing Birkir Bjarnason missed a wide open shot in front of the Argentine goal post. Just 8 minutes later, however, Argentina was on the counterattack and center forward Sergio Aguero juked out an Icelandic defender before shooting the ball into the back of the net while falling down. However, it soon became clear that Iceland wasn’t going down without a fight and in the 23rd minute, center forward Alfreð Finnbogason made history when he scored Iceland’s first goal in a world cup match. In the 64th minute, left back Horour Bjorgvin Magnusson pushed right wing Maximiliano Meza inside the box, resulting in a penalty kick for Argentina. However, just minutes later, goalkeeper Hannes Dor Halldorsson blocked striker Lionel Messi’s kick and denied Argentina from gaining a lead. The Nordic’s defense proved to be too much for Argentina and the Argentines were unable to convert another goal before the end of the game. Iceland’s shocked the world with a tie and proved that no team was too small or weak for the world cup.

Going into the game, neither team was favored over the other. Both Croatia and Russia had surprising and successful runs in the 2018 World Cup (so far), and the world was watching to see who would clinch a spot in the semifinals and who would go home. After an intense and nerve-wracking game for viewers, Croatia was leading 2-1 with only around 5 minutes left in the game. It seemed like all hope was lost for Russia. However, at the 115th minute, right back Mario Fernandes headed the ball from a Russian free kick to score and tie up the game in a spectacular and miraculous manner. As a result, the match went into intense penalty kicks to determine the winner. Things looked bad for Russia from the start as Fyodor Smolov failed to convert his penalty. However, the host nation was saved from elimination (for now) when Croatia also failed to score its second penalty. Moments later, however, Russia’s world cup dream vanished when Fernandes missed Russia’s third penalty kick. Eventually, Croatia would go on to win 4-3 in penalties and shock the world. People from around begin to see Croatia’s world cup dream become a reality. Though Russia’s world cup campaign came to a halt, they clearly showed what they were capable of and proved themselves on the world stage.

The Round of 16 match featuring France and Argentina was the highest scoring game of the cup, filled with action and excitement. People from around the world were unsure throughout the game who would be victorious, as it saw both teams make a comeback from being a goal down. After France’s successfully converted a penalty kick in the thirteenth minute, Argentine left forward Angel Di Maria shot from a distance and beautifully scored, tying the game at 1-1. Just minutes later, Messi’s shot was deflected by right back Gabriel Mercado, and the ball found itself in the back of the net to put Argentina up 2-1. Later in the game, 19-year-old Kylian Mbappé would go on to score two more goals for France, becoming the first teenager to score twice in a single world cup match in over sixty years. Eventually, France would go on to defeat Argentina 4-3 in an intense and fierce battle. The game would go down in history as one of the best, as it once again highlighted Messi’s lost chance to win a world cup title and the eventually downfall of Argentina’s run in the 2018 World Cup. Additionally, the match showed a real glimpse of the French ‘dream team’ and provided an insight into what was to come.

Neighboring countries Portugal and Spain went at each other in arguably the most intense and nerve-wracking game of the world cup. People around the world were watching to see how Cristiano Ronaldo would do against many his Spanish teammates from La Liga, and he did not fail to disappoint as he went on to score all 3 goals for Portugal, his first hat trick in a world cup. Just three minutes into the match, Portugal was awarded a penalty after a Spanish defender clipped Ronaldo inside the penalty box. Ronaldo successfully converted the kick and Portugal led 1-0. Spain also showcased a package of talent and skill, as Costa netted two goals of his own. Soon after Ronaldo’s penalty kick, center forward Diego Costa dribbled down the field, juked out three Portuguese defenders and cooly scored tying up the game 1-1. In the 2nd half, Spain scored two back to back goals in a span of three minutes to lead the game 3-2. With only around two minutes of the game left, it seemed as if all hope was lost for Portugal. Miraculously, however, Ronaldo capitalized on a free kick opportunity sending the ball into the top right corner out of Spanish goalkeeper David de Gea’s reach. Portugal manages to narrowly avoid a loss and the game ends in a 3-3 tie. Despite it being only the second day of the world cup, the battle between Portugal and Spain perfectly foreshadowed of what was to come.

Croatian center forward Mario Mandzukic scored an own goal in the 18th minute during Antoine Griezmann’s free kick, putting France up 1-0. Ten minutes later, however, left wing Ivan Perisic capitalized on midfielder Luka Modric’s free kick after Perisic juked out midfielder N’Golo Kante and blasted the ball past three French defenders in the back of the net. However, Perisic’s luck would soon run out when he handled the ball less then ten minutes later in the penalty box. Though the referee initially overlooked the play, he awarded France with a penalty for a chance to regain the lead. Griezmann successfully converted the penalty and put France ahead 2-1. In the second half, France had another golden opportunity as Griezmann juggled the ball in Croatia’s penalty box. Moments later, he passed the ball to midfielder Paul Pogba who scored on his second attempt increasing France’s margin over Croatia. five minutes later, France would seal the fate of the World Cup when right wing Kylian Mbappé became the first teenager to score in a world cup final. Eventually France would go on to win the match 4-2 and become world cup champions for the second time in history. Though Croatia had a 61% ball possession and twice as many total shots, Croatia failed to capitalize and score on numerous occasions, while the French were able to successfully score through several counterattacks and set pieces. Additionally, the French surprised the world with its young, talented team who proved that nothing could stop them (the team’s average age was 26-years-old). Nevertheless, through Croatia’s unwavering faith from the beginning of their campaign and France’s miraculous and magical team, the 2018 World Cup showed how anything was possible.