The man behind the mask

“Spider-Man: Into the Spider-Verse” broke boundaries with diversity, ranging from a biracial African American Latino Spider-Man to Spider-Woman, emphasizing that truly anyone can be a superhero. 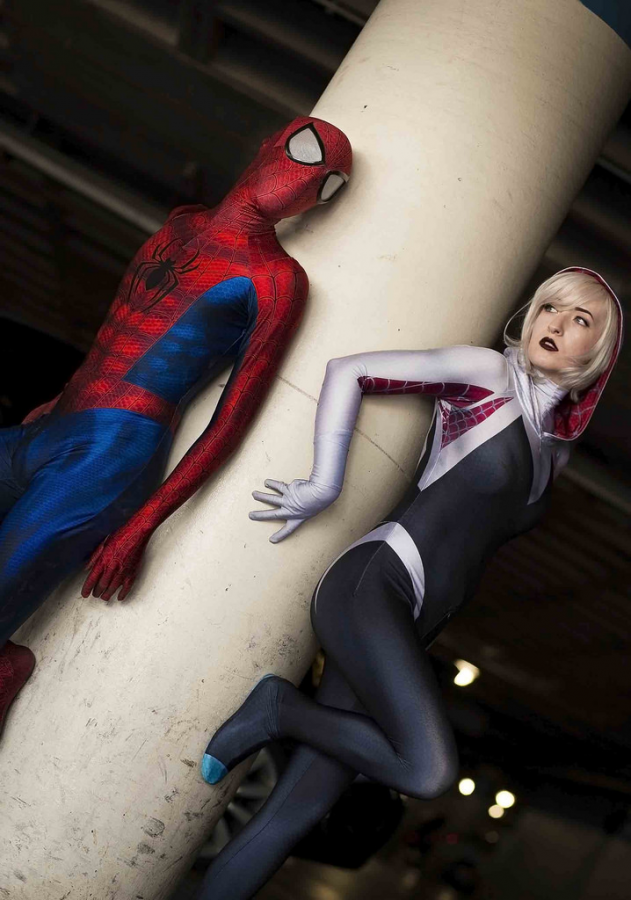 Spider-Man and Spider-Gwen, also known as Spider-Woman, stand side by side ready to take on the world, bringing about diversity as a woman behind the mask.

What if I told you it wasn’t just one man behind the mask, but multiple men. Not just men either, but women. “Spider-Man: Into the Spider-Verse” hit theaters on Dec. 14, setting a new standard for diversifying animated movies and receiving a ranking of 95% from Rotten Tomatoes. Sony partnered with Marvel to unravel a movie that, although unknown at the time, would inspire many to come.

Starting with the animation, the film can be said to have come straight out of a comic book, combining the art of 2D with 3D. The producers worked hard to present a story behind each image. Diving into the sea of characters, there were seven different character representations of Spider-Man, complete with a cameo appearance of the late Stan Lee. The main character was Miles Morales, a biracial African American Latino teenager from Brooklyn. Played by Shameik Moore, Sony gives us someone who we can relate to, someone real, and most of all, a new face behind the Spider-Man mask. With much attention to detail, the movie even pays homage to Morale’s character, a Puerto Rican from Brooklyn, through use of his iconic untied Air Jordan 1s. These Jordan 1s are generally worn untied as a style from his neighborhood.

“I was never the type of person to look at a movie and see the white man,” Moore said. “I loved 007 and Superman. They happened to be white and I didn’t care. I never thought that because these characters were white meant that I wouldn’t be able to do that. Maybe that’s why I was chosen to do this.”

However, this is not the only type of diversity that this groundbreaking film offered. Also introduced was ‘Spider-Gwen’, or Spider-Women. Although this is not the first time that this idea has been played out, it is the first time to have been done so in a movie. Gwen, voiced by Hailee Steinfeld, is shown with the most classic scenes from the comics, including herself with her music.

As every superhero fan knows, with great power comes great responsibility. It is Gwen’s backstory that truly gives her, in my opinion, the role of the greatest Spider-Man. As a child, after Gwen was bitten by a radioactive spider, Gwen’s friend Peter Parker was fascinated with the idea of Spider-Woman. An obsession for powers of his own drove him to become the outcome of his experiment, a savage lizard. Gwen, not knowing that this was her friend, killed the lizard. Not wanting to tarnish his reputation, Gwen accepted blame for the damage done by the lizard. Sadly, it was her father, a detective, who had to press charges. Although only offered as a backstory in the actual film itself, it still provides a start, proving that it is not only Spider-Men who deserve to be superheroes.

Finally, comes Peni Parker, resembling an anime girl. Peni plays a prominent role in the film, especially as she brings along her Japanese culture. Played by Kimiko Glenn, she has no superpowers, but instead wears a suit giving her powers. This role was a big inspiration for actress Glenn and many other Asian girls.

After seeing her character arc, Glenn, who is half-Japanese, responded “I grew up around Japanese culture my whole life. That was really cool. I just had a plethora of ideas.” Glenn found that she had many more opportunities doing voice overs. “It opens up the whole voiceover world to me because you can’t see my face,” she said. “I get to express myself however I want. Being biracial in this industry is kind of an interesting thing. I’ve always been hyper aware of that because I’ve been told so many times you’re not Asian or white enough.”

The other Spider-Men include the first Peter Parker, played by Chris Pine, who dies to sacrifice himself for Miles, and the second Peter Parker was played by Jake Johnson of New Girl. Also included are Spider-Man Noir, a more traditional Peter Parker portrayed by Nicolas Cage, and finally, Spider-Ham. Spider-Ham provides comic relief and is appropriately played by comedian John Mulaney.

After all of this, what seems to make this movie most worth it is Stan Lee’s cameo, who plays the animated cashier while Miles buys his costume.

Bringing many to tears, Lee says to Miles “I’m going to miss him. We were friends.” While Lee is talking about Spider-Man, it also felt like he was saying good-bye to the audience knowing that this may be one of his last cameos. Fittingly, the movie ends on a quote by Stan Lee: “that person who helps others simply because it should or must be done, and because it is the right thing to do, is indeed without a doubt, a real superhero.”

It is even you and I that are behind the mask.