Freshman Reflect on their First Year at Jefferson

In and out of school, freshman have very different opinions on what’s been happening at Jefferson 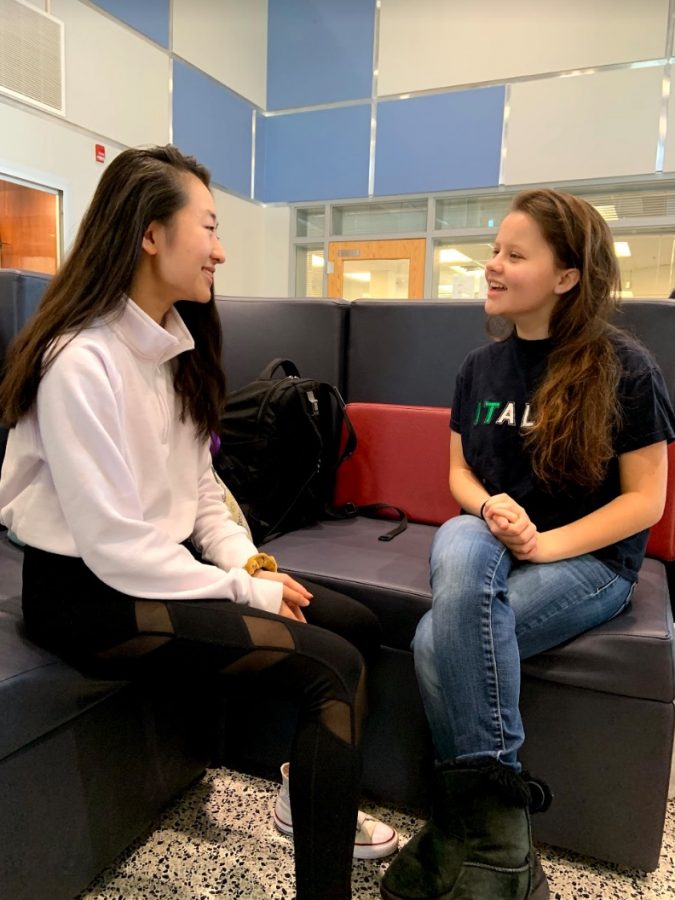 Freshmen Reena Wang and Alyssa Gorbaneva reflect on their time at Jefferson in the Noble Commons.

As of Dec. 22, 2018, the freshman class of 2022 has spent 77 days at Jefferson and as the year closes, we asked freshmen to reflect on their first four months at the school that will be their home for the rest of their high school years. We can speak for most freshmen when we say that we heard one or two things about Jefferson before actually attending the school.

Aleesha Khurram, a violinist in Jefferson’s Symphonic Orchestra, expressed some of the concerns she had before even attending the school, although they were not exactly true.

“I was told that the workload was going to be unbearable,” Khurram said. “Yes, the workload is significant, but if you manage your time wisely, it is not that bad.”

Others, such as freshman Srimann Ramachandruni, came to Jefferson expecting much different things.

“[TJ was] a lot more difficult than what I thought it would be like,” Ramachandruni said. “In middle school, I was able to easily balance my extracurriculars, social life, and schoolwork but here, it is the exact opposite.”

According to the U.S. News and World Report, Jefferson ranked 10th in the nation and ranked first in the state. Hosting some of the country’s brightest minds, Jefferson welcomes students from all over Northern Virginia who academically and intellectually excel in their middle schools.

“I had to do very minimal work to do well at my middle school. Here, I am faced with much more academic rigor,” Ramachandruni said.

The unprecedented challenges of commute, extracurriculars, and rigor of Jefferson has been taking a toll on some students.

“The commute here has its advantages and its drawbacks. It is easy to get distracted on the bus and the early wake-up time is definitely challenging,” Ramachandruni said. “However, it is also a good time to talk with friends and do homework.”

Although there may seem to be a couple downsides being a student at Jefferson, the opportunities provided are never ending. Freshman Alyssa Gorbaneva notes the strong sense of community among Jefferson students.

“The community is so strong and tightly knit, we have so many activities after school,” Gorbaneva said.

However, the close knit community may not be enough to help students feel like they belong at Jefferson. Students can have issues with self doubt and lack of confidence. Gorbaneva expressed how one must have confidence in order to not only survive but also to thrive at Jefferson.

“It might be troublesome for some people to remind themselves that they aren’t incompetent,” Gorbaneva said.

However, as long as self confidence is present, anything can be accomplished while avoiding too much stress. It may be challenging for many to feel accomplished or “smart” at Jefferson, but it’s important to remember their accomplishments are their own. Jefferson may be a challenging school, but its rigorous curriculum, tight-knit community, and unique environment is what makes it worth it all. The community and opportunities provided at Jefferson are what make it unique.

“Since Jefferson puts a high priority on student-teacher relationships and extracurricular opportunities through eighth period activities, students have many access points to other opportunities while also learning along the way,” Gorbaneva said.