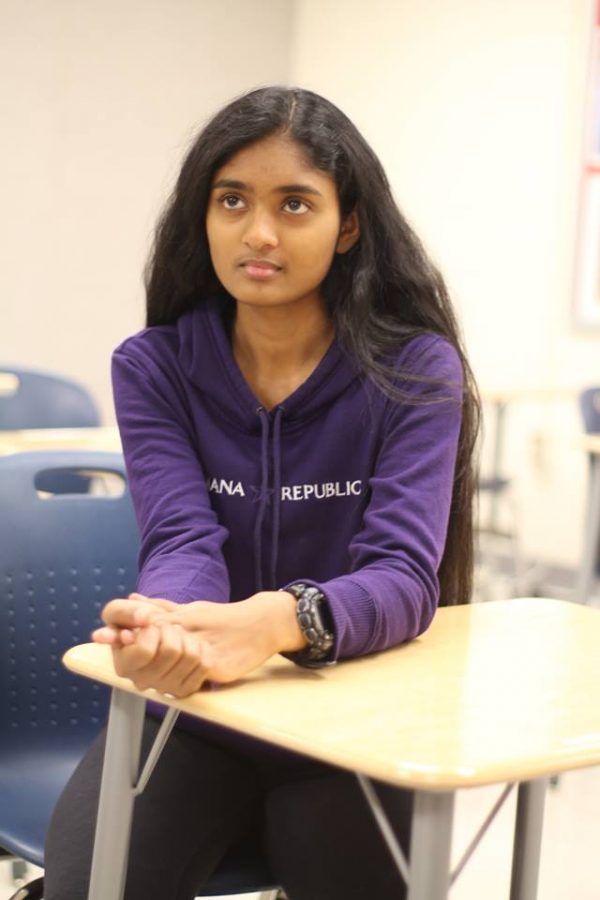 Yukta Chidanandan first found about that she had ADHD sophomore year. Since then, accommodations have helped her overcome the barriers of a learning condition.

That’s what senior Yukta Chidanandan’s pediatrician said. In her pediatrician’s opinion, it was impossible for Chidanandan to have both good grades and a learning condition.

Since elementary school, Chidanandan suspected that she had Attention-deficit/hyperactivity disorder (ADHD) after two of her best friends, who had ADHD as well, noticed many of its symptoms in her. However, her pediatrician downplayed her concerns.

“My parents don’t come from a background where these disorders are really acknowledged so they didn’t look any further,” Chidanandan said.

It wasn’t until coming to Jefferson that Chidanandan faced serious academic struggles caused by her potential learning disability.

“Entering high school, I was just confused about why I wasn’t doing better at school, why I couldn’t remember things, and why I was so slow.  It was a really frustrating time,” Chidanandan said.

“I kept answering questions or explaining stuff in class and doing problems on the board, so she knew I understood the math. The problem was, I’d keep making really dumb mistakes on tests and blanking out on how to do problems she’d seen me teach my friends or partners to do,” Chidanandan said.

Though Chidanandan was a sophomore by the time she was first diagnosed, the average age of diagnosis for ADHD is seven years old. Chidanandan points to the misconception that high intelligence and learning disabilities cannot coexist as a reason for her late diagnosis.

“At TJ, it’s kind of different since a lot of us don’t come from backgrounds where we really see these things like a real disorder or anything,” Chidanandan said.

Today, Chidanandan receives a number of special accommodations to cope with her ADHD, which causes her to have low processing speed. For example, she receives 50% extra time on tests, is guaranteed an extra class period if she asks for advance on an assignment, and can use a four-function calculator on non-calculator parts of tests, though she notes that she does not use the accommodations very often.

“If I’m just taking a multiple choice history test, that’s a lot easier for me to do quickly, and I generally don’t need that extra 50% time on it,” Chidanandan said. “But if I’m taking a math test, or a test that requires writing an in-class essay, then I generally do need the extra time. So I would only ask for it if I really do need it.”

Accommodations are designed and granted to students through a meticulous process in order to ensure that they are well-suited to students and establish a completely level playing field between students with learning disabilities and students without them. The first step of the process involves recognizing that students may have learning conditions if they have not already been diagnosed, as was the case with Chidanandan.

“Some students, they don’t know what’s going on with them, so they’re concerned. They are not able to focus, they’re not concentrating, they’re having difficulty, but they don’t know why,” school psychologist Dr. Esther Barkat said. “So that’s where the teacher starts noticing [and] parents start noticing that there is a problem. So then we start the process to figure out if there is a problem.”

Students then undergo several comprehensive evaluations in order to determine whether they qualify for special services. Students can either receive 504 plans, through which the school works to help kids with disabilities learn alongside their peers, or Individualized Education Plans (IEPs), which involve education specialized for the student.

“We need to do a full evaluation which could involve psychological testing, educational testing, social case histories. We could obtain information from families in terms of any medical information they may have and then we could also request a hearing evaluation and a vision evaluation,” special education teacher Martin Dubin  said. “And then we take all this information collectively and review it and see if the student qualifies under any designated area of special support.”

Certain tests are conducted not to determine whether the student has a learning condition, but to ensure that external factors are not causing symptoms associated with learning disabilities. One example is the social case histories test.

“The purpose of the social case histories is to make sure that there hasn’t been any type of traumatic event in their life that they’re working through. It’s causing a problem, but it’s temporary in nature and so that doesn’t require special support,” Dubin said.

The process of determining accommodations must be as accurate as possible since giving students accommodations they do not need can actually be a detriment.

“Now you could say I’m going to give these accommodations to other students who don’t need it. Well, that’s not fair. Because what that’s doing is saying just because you want it you can have it, and it doesn’t matter that without the accommodation, you can still do fine,” Dubin said. “Maybe you’ll do better without it. But the fact is you don’t have an impediment which is preventing you from learning.”

However, even accommodations approved through the comprehensive screening process may be viewed as unjustified and unfair by students in the Jefferson community because of the misunderstanding that accommodations make up for a lack of intelligence. This is evidenced by a post made on TJ Vents last month in which a student complains about the presence of unequal standards.

“Sometimes there are students who have that perception of others. So if you’re given extra time for tests, other students might feel that that’s unfair. But it’s an accommodation that you need in order to make it more fair for you. Because there’s a gap there that another student wouldn’t have,” Bonitatibus said.

Dubin elaborates on the idea that in reality, high intelligence and learning disabilities are compatible.

“Other students may need special accommodations with processing difficulties, so their intelligence is normal, or maybe way above normal, but the way the information is transmitted, not because of acuity issues, but because of a neurological issue, a processing issue, they may need extra time to process,” Dubin said. “So these might be very bright students who understand the concepts but have to process a question longer, and process the answer longer. And when they do that, they could show what they know. But without that, they can’t.”

Furthermore, Chidanandan points out that tests in schools are not an accurate representation of one’s real-world abilities.

“When you join the workforce, you don’t really have a test where it’s 120 minutes — solve all these problems. So they’re a lot less relevant to the real world, which is why accomodations in school systems make sense,” Chidanandan said. “You’re taking us out of these real world scenarios and putting us into these scenarios where our natural abilities wouldn’t really show as well. Since we’re changing the system and taking us out of the real world, it’s kind of leveling the playing field so the system is fair to everyone.”

Nonetheless, Chidanandan has never had any negative interaction regarding special accommodations with students in the Jefferson community.

“I think even if people don’t actually understand what we’re going through, they understand that they don’t understand it and they’re still generally normal about it. I think it’s kind of a niche view that it’s unfair that people get 504s and IEPs,” Chidanandan said.

Other students in the Jefferson community back up this view.

“I entirely feel that these accommodations for people who have learning disabilities is totally justified. I have a friend who has a learning disability and whenever we’re taking a test or she’s in class, it’s really hard for her to focus and I can understand how that translates to taking more time,” senior Jennifer Hernandez said.

Ultimately, establishing what equality and fairness mean in this scenario is critical for understanding the reasoning behind special accommodations.

“When I try to consider what is truly fair, I don’t start with what’s equal; I start with saying, how can we give everyone the same opportunity?” sophomore Quentin Lovejoy said. “And I think handicapped parking spots [is] a great example of when equal is certainly not fair. You don’t want to give someone who needs a wheelchair a spot super far away from wherever they going. And this is sort of the same scenario — people who might need this extra time should deserve it; that’s just the right thing to do.”