A Future in Artificial Intelligence 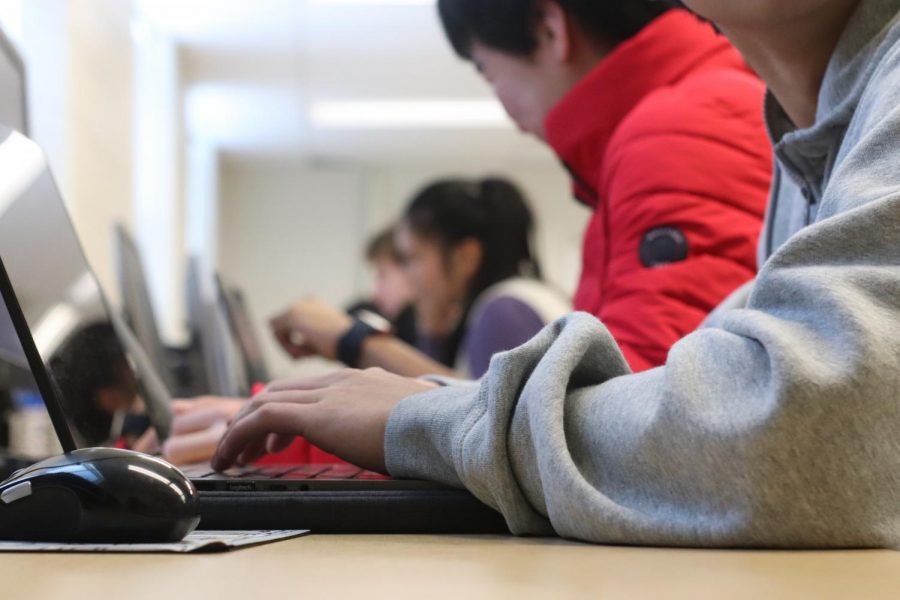 Students in Ms. Kim’s Artificial Intelligence work diligently on their assigned labs. Sophomore, Nuha Mohammed is currently in such a class. “As a rising sophomore, I chose to take AI because I discovered that AI was my future and the future,” Mohammed said.

Before he even knew what it was, senior Sagar Saxena was already on the path to excellence in artificial intelligence (AI). After visiting MIT for a campus tour and walking around their museum, Saxena found himself at an exhibit involving computer vision. Not thinking much of it, he quickly moved on.

“It wasn’t until much later during the car ride back home that I truly realized what I had read. I was looking out of the window, restless to get home, and for some reason my mind went back to the display. I picked up the first thing I saw, a tree, and thought how would I make a program that takes an image of a tree and tells me its a tree. Intuitively, this seems very simple. You and I can make an instant decision and determine that the object we are looking at is a tree,” Saxena said.

Saxena’s tree-themed thoughts were indeed, skimming the idea of computer vision. Computer vision is an interdisciplinary field that concerns computers obtaining high-level understanding from digital images or videos. Saxena has a vivid passion for computer science, and come the end of next semester, he will have taken every computer science class that Jefferson has to offer. Currently, he is in the Computer Systems Lab, working on a project that can ultimately rid the school system of faulty attendance.

“If I am successful, I will have created a system that can take attendance of a classroom, save time for teachers to teach, and for students to learn,” Saxena said.

Artificial Intelligence gave Saxena something to focus on – something that he can work towards. For him, it’s a great feeling to know what he wants to do in the future, and he’s inspired by the power that AI holds.

“It was this awe for how complex our minds are coupled with the challenge of translating this psychological process into computer science that drove me to take AI,” Saxena said.

Saxena’s senior research project will be using computer vision to automate attendance in classrooms. This can eventually make up for teachers who forget to take attendance at the beginning of class, or make a simple mistake. Additionally, this can save valuable instruction  time.

“AI is, at its core, the field of decision making. The first decision to be made is given a classroom of students, can I determine where each face is, regardless of its pose, simply put as facial detection,” Saxena said.

Saxena believes that AI can hold benefits for any field, and not just computer science. At any job, you’re constantly going to be asking questions and making decisions, and AI has the potential to make these decisions for you by analyzing all the variables and unrestricted information.

“Jefferson’s investment in educating its students in Artificial Intelligence can be seen through the amazing projects that come out of its labs. It’s not just the Computer Systems Lab that is producing projects based in AI, but in fact every lab at TJ,” Saxena said.

Mr. Shane Torbert is the division manager of the Math and Computer Science Department. When asked how artificial intelligence has changed his life, Torbert stated that it has changed his life on the margins, more so in ways such as suggestions on Youtube and Amazon.

“I’d rather get lost and spend 20 minutes figuring out where everything is than have a “smart guide” walk me through it step-by-step every time forever. Very old fashioned, I know,” Torbert said. “The margins are growing, and personalized medicine in particular would be a welcome development.”

Saxena is not the only one who is convinced that AI is a type of superpower. Nuha Mohammed, currently a sophomore at Jefferson, took AP Computer Science A+ as a freshman. This year, Mohammed is taking Jefferson’s Artificial Intelligence class. To her, AI is her future, and the world’s future.

“AI sounds so conceptual to an amateur, but as a computer scientist, it is intriguing to implement AI algorithms and understand these concrete concepts that people have developed,” Mohammed said. “For example, if you know that slurred speech is linked to Parkinson’s Diseases, you can use the recordings of patients to train your algorithm, and eventually testing this algorithm on a different patient will allow you to diagnose Parkinson’s at an early stage.”

Unfortunately, with all the perks that come with AI, there are some serious downfalls. An obvious one is that automation will lead to the loss of jobs. On the other side, Saxena wholeheartedly believes that AI will do the opposite, but does admit it can be a slippery slope.

“It’s similar to the theory behind The Luddites, the group that destroyed machinery because they thought it threatened their jobs. Eventually,  the same machinery led to the creation of many more jobs. AI can and will lead to the creation of more jobs. I would be lying, however, if I said it isn’t a slippery slope. AI will progressively take more specialized jobs and humans will have to keep becoming more competitive. Maybe, one day, AI will take over my job and program another AI,” Saxena said.

In May 2018, the General Data Protection Regulation laws were put into place in the European Union (EU). Through these laws, users have the right to a logical explanation on how an algorithm is implemented and how it uses their data. These laws required several companies to change their privacy policies.

“There are growing concerns regarding the ethics around AI. We are coming up with new technologies and applications day by day, which means there is an invasion of privacy. It really depends on what perspective you look at AI from. The debate is quite interesting: is AI really conscious?” Mohammed said.

Another problem is that algorithms can be biased, because they are built to perform for a certain set of data, and are therefore vulnerable. Nonetheless, Saxena brings up another point: algorithms are built to be biased. He provides an example through Facebook, where one’s feed is tailored with their viewpoints, while another’ may be tailored with opposite viewpoints.

“People like to think of the internet as a way of connecting to people from different backgrounds and of different perspectives, but in reality, it may be dividing us further. People see what they want to see and so people only connect with people they would want to connect with,” Saxena said.

While both Mohammed and Saxena can’t stop talking about how artificial intelligence is the future, they both understand that it can be a weapon as much as it can be a boon.

“Think of it as Einstein’s mass-energy equivalence equation. On one hand it gave us nuclear power, an alternative energy source with a potential of solving global energy problems,” Saxena said. “On the other hand, it gave us the atomic bomb. AI is a tool as much as any other. It can be used to greatly advance society, but it could also be used for more nefarious purposes. It all comes down to who is using it.”