There and Back, Again and Again 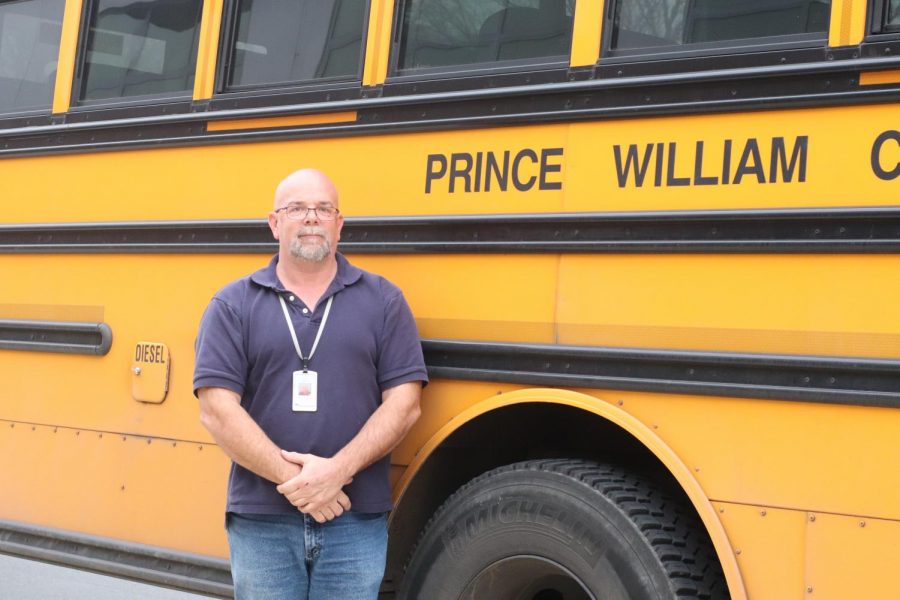 Mr. Brian Means spends between seven and eight hours a day driving his bus to and from Jefferson. Photo courtesy of Claire Wilson.

5:58 a.m., Aug. 28: Prince William County bus driver Brian Means pulls up to the first stop on his bus route. From this point to Jefferson, his route measures just over 52 miles.

Every weekday, Jefferson students on Means’s route spend approximately four total hours on the bus, compared to the hour students from other counties spend in transit. However, Means spends roughly double that time on the road, traveling the 52-mile route to and from Jefferson, twice a day.

“[The transportation department] called me one summer, while I was working at my second job [park ranger for Prince William County] and said, ‘Brian, we want you to do a specific run for us,’” Means said.  “I said, ‘You know me, Jennifer, I’ll do whatever you want me to do.’ She says, ‘Well, that’s why we want you to do it. It takes a special person.’”

Prior to becoming a bus driver, Means was the manager of an automotive repair facility. However, after 28 years, he did not like the direction in which his work was going.

“I decided that it was time for me to make a change,” Means said. “I was putting in about eleven and a half to twelve hours a day, five days a week. Then on Saturdays, I put in another five and a half hours. I didn’t really spend a whole lot of time at home. I missed seeing my girls grow up.”

Becoming a bus driver freed a significant amount of time in Means’ schedule. Instead of having sparse free time in the evenings, he has free time in between his morning and evening runs, as well as some time after his evening run.

“I get off the bus in the morning right about 9:45,” Means said. “I’ve got from then until 2:20 in the afternoon when I leave to pick up [the students]. That’s when I do all my errands and stuff around the house. It works pretty well for me because there’s nobody out at that time. There are no lines or traffic.”

In the evening, Means follows the same morning route, only backwards. Departing Jefferson around 4:15 p.m., his bus generally reaches Stonewall Jackson High School, the western end shuttle stop, between 5:00 and 5:15 p.m. If traffic permits, Means is home by 6:45 p.m.

“I don’t mind driving, even in rush hour traffic, morning and evening,” Means said. “I don’t have a problem with that. Getting a job here where I’m home at 6:30 at night is a plus for me.”

Means knows that his face is one of the first ones his students see in the morning, and one of the last ones they see at night. He spends four hours with them, and now multiple years with all except the freshmen. This is why he tries to get to know his students better.

“I always try to learn the names of every one of the students on my bus,” Means said. “One kid asked me why I wanted to know his name. I said, ‘Because I should,’ and he said, ‘I guess so. Nobody wanted to know my name before.’ I suppose that’s what makes me a little bit different.”

Even during the morning run, when most students are either asleep in their seats or trying to cram in some last-minute studying, Means has a genuine interest in engaging the students on his bus.

Means has two daughters. Both of them had difficult times on buses when they were in grade school. In fact, his eldest daughter was bullied on the bus. Means does not want another student to go through what his daughter did.

“I try to be a nice guy, try to let everybody get along, and make sure everybody has a good bus ride because I’m the first one that sees everybody in the morning, and the last one that sees them at night,” Means said. “I like to think I can have some kind of influence on the way people think.”