Complex Plots and Where To Find Them: The Crimes of Grindelwald 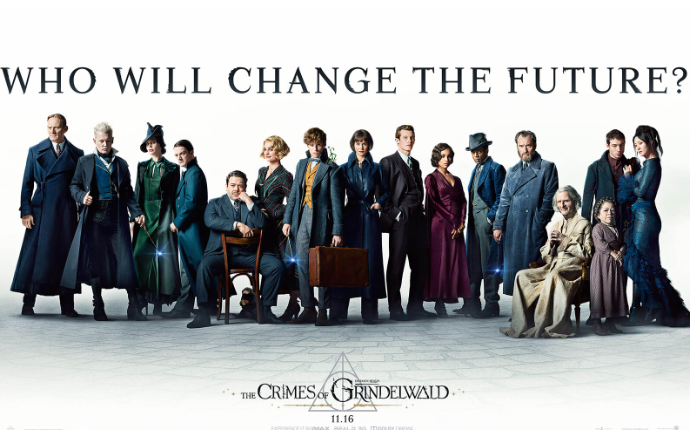 "Who Will Change the Future?" Crimes of Grindelwald promotional poster. The movie came to theaters on Nov. 16 2018. Image courtesy of fantasticbeasts.com.

*Spoilers for Crimes of Grindelwald and Fantastic Beasts And Where To Find Them.

Fantastic Beasts: The Crimes of Grindelwald was a crime in itself, to say the least.

The Harry Potter franchise is beloved by fans from all over the globe. When Fantastic Beasts And Where To Find Them was released in theaters in 2016, viewers swarmed to watch it, and the movie earned $814 million in revenue. Naturally, when Fantastic Beasts 2, otherwise known as The Crimes of Grindelwald came out several years later, many, including myself, were expecting a sequel that would live up to the glory of the first installment in the prequel series.

Unfortunately, this was not the case.

For a brief summary: Gellert Grindelwald, the Voldemort of this time period, breaks out of prison with the help of his servant. While trying to get his international travel rights back, Newt Scamander is reluctantly enlisted by his former teacher, Albus Dumbledore, to stop Grindelwald’s goal of raising pure-blood wizards to reign over non-magical beings. This in turn causes them to break the law, reunite with old friends, and lose others through the inevitable character deaths that await them in this grim world.

To begin with, there was no explanation for many events starting out. When Credence first appeared in the freak show circus, most viewers probably didn’t know why he was there, how he got there, or his motives for any of his actions. Why did he befriend Nagini? Was it accident or something else? It didn’t add to the plot smoothly at all, and I was left grasping at unclear hints as to what had happened throughout the entire movie.

There were also numerous unnecessary characters added who died almost as soon as I finally remembered what their names were–the servant who put Credence (Ezra Miller) up for adoption was killed around ten minutes after she was introduced. Leta Lestrange (Zoë Kravitz) is another character with an interesting background, drive, and personality that would have made her an enjoyable character; however, like Credence, she too was killed off unnecessarily. Both of these characters were used merely as plot devices and then thrown aside, something that looked a lot like lazy writing to me. The fact that they were even given names, which usually signify that a character is important, only worsens the problem.

With a thick plot that felt rushed and crammed into a 135 minute movie, J.K. Rowling’s talent in writing plot-rich epics seemed to fall flat in the hands of the screenwriting department for The Crimes of Grindelwald.

However, that’s not to say the movie didn’t have any decent aspects. The production design was gorgeous– from piercing flames to flying carriages, everything else was rendered wonderfully. The magical world felt vibrant and vivacious, filled to the brim with the whimsical feel that many fans of fantasy movies are familiar with. Because of this, the movie was incredibly appealing to the viewer’s eye. Additionally, the acting was solid for the most part, especially for the characters that weren’t given much to work with.

Overall, The Crimes of Grindelwald managed to carry on the fun, enchanting atmosphere of the Wizarding World we all know and love, but the beautiful visuals and solid acting were overshadowed by its complicated and tangled up story.