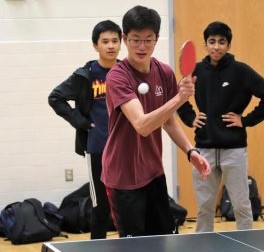 Ready for action, freshman Andrew Kim attempts to knock back the ball coming at him. Freshman Shreyas Chennamaraja and Alex Peal watch in the background as they wait for their match to begin. Photo courtesy of Forrest Meng.

Students at Jefferson have seen volleyball tournaments, basketball tournaments during J-Day and trivia nights. This year, something new comes into the mix. The Student Government Association (SGA) is organizing Jefferson’s first schoolwide tournament for Ping Pong. The idea stemmed from a desire to start a Ping Pong club.

“At the beginning of the school year, I heard that some people were trying to start a Ping Pong club, but that never started. Being a part of SGA, I thought it would be a good idea to propose to them a Ping Pong related event, which eventually became the tournament,” sophomore David Kwabi-Addo said.

Kwabi-Addo, junior Ronith Ranjan and junior Rohan Kalra are the main students organizing the tournament with SGA, which they started planning around late October.

“We wanted to create more activities that the whole community could participate in and enjoy. Ping Pong is really easy to set up and still very fun.  It’s a more relaxed and chill sport to play during lunch,” Ranjan said.

They took inspiration from other Jefferson tournaments such as February Frenzy, but also wanted to create a unique event.

“The other sports [in tournaments] require more physical exertion and a larger space but Ping Pong does not. Anyone can play, we don’t need many refs and the overall environment is less aggressive,” Ranjan said.

In order to plan the tournament, they had to gain permission to use the Ping Pong tables and reserve Gym 2. For the players, they also created an information sheet to explain their event. An essential aspect of planning was creating the bracket and figuring out how to structure the tournament.

“First, we realized that the tournament needed to be doubles since we knew a lot of people would sign up. To make sure the tournament wouldn’t last that long, we limited the maximum number of teams to 32,” Kwabi-Addo said.

“We had practiced setting up [the Ping Pong] tables and everything beforehand, so that wasn’t a problem for us. I think it [the first day] went well. The students were enjoying it and everything ran smoothly,” Kalra said.

Four games have already taken place so far, with one of them played by freshman Shreyas Chennamaraja.

“It [the tournament] was a nice stress reliever where I could just spend good time with my friends. I had a good time, even though we were beat by the seniors,” Chennamaraja said.

There are 24 more teams left to compete in Round one. Sophomore Justin Choi is one of the players waiting to play his first game.

“It’s [Ping Pong] not really a sport that gets mentioned a whole lot around TJ, so it’s always nice to participate in something underrepresented, and also there’s the aspect that the environment is a more friendly competition,” Choi said.

Students can come and see the Ping Pong tournament games during Lunch at Gym 2 until Dec. 14, which is when the final will be held. In the future, SGA hopes that this can become an annual event.