TJMC at Bands of America 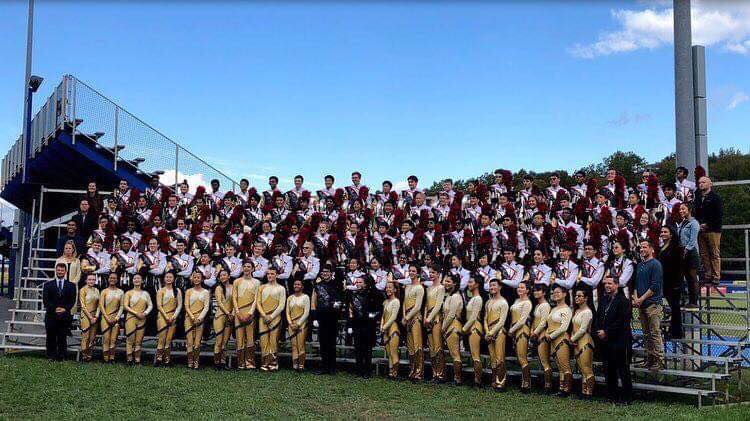 Thomas Jefferson Marching Colonials and Color Guard at the 2018 Bands of America competition.

Everything is pitch black. Everyone’s slaving away, trying to find gold, but only coming up empty with coal. Slowly, however, their hard work pays off, and they start to find gold. A huge sheet of gold flies over, erupting in gold fanfare as everyone celebrates their newly-found riches.

Perhaps one of the most integral parts of every high school football game is the marching band, known as the Thomas Jefferson Marching Colonials (TJMC). Direct from their performance this past season, the band and color guard performed a breathtaking, meticulate performance surrounding the theme, Fantasies in Gold. Every year, the color guard instructor researches a theme and picks out songs from that era: this year, it’s the gold rush.

In the marching band, students play all sorts of instruments, from percussion, to brass, to winds, and the performance is enriched by the members of the color guard as well. In addition to cheering on Jefferson’s football team, TJMC participates in 5 competitions solely for marching bands every season. Perhaps one of the most challenging competitions of the year is Bands of America (BOA). Sophomore Hita Yalla, a marching band member, gave insight into what TJMC is like and gave an overview of the marching band competitive atmosphere.

BOA is perhaps one of the most challenging competitions for TJMC every year. When asked why, Yalla responded by explaining that bands from all across the East Coast compete to be named the best, and although the band knows that they are going up against some of the best bands out there, they still try their best.

“It’s really important, [really] significant, that we compare against the top 10 bands in the East Coast.” Yalla said. The idea is that you can never get better by competing with those you know you can beat, so you have to give yourself the opportunity to be challenged and learn from the best there is.

Yalla also talked about the different categories and criteria for the performances, and the outcome of the recent performance. “There’s music, musical effect, general effect, visual effect, individual and [more],” said Yalla. In addition, Yalla explained the rating system at BOA, that all competitions are based on a points system from 0-100. Of course, performance is subjective and different competitions have different benchmarks for what is considered the standard. TJMC received scores in roughly the 60s and 70s at BOA, because, of course, the grading system was very difficult and they were compared to several other high-performing bands at the competition. TJMC barely slid by in 9th place during the preliminary round, and they were able to top their score with 6th place in the finals. While that may not seem prestigious, you can bet that they’ll still be back next year to try again.

“This season has been so much fun, like last year, it was really difficult because I was a freshman; it was like, I don’t know what I’m doing, but this year’s like, I knew what was going on [and] I was able to help others too, so I thought it was really fun this year,” said Yalla.

Although, when all is said and done, Yalla explains how the thing that makes marching band worth it for her is the people. “I’ve made so many friends, and so many memories too. For example, at the end of the end of the last competition, everyone just breaks out into tears and are really emotional and it’s just great. You should do it,” Yalla said.