One quarter down, three more to go 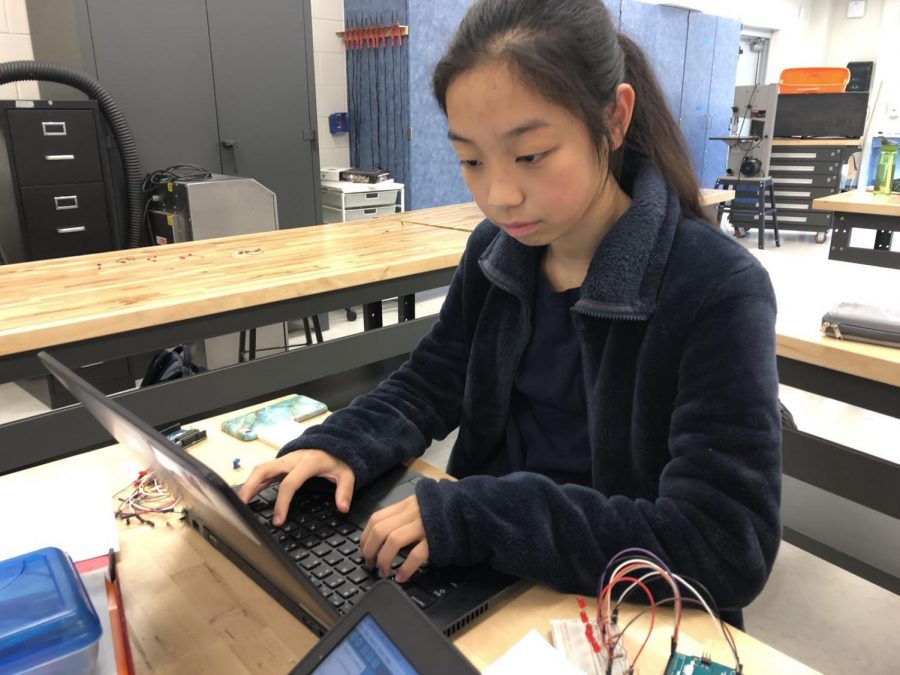 Freshman Joanna Cheng programming with an Arduino microcontroller during tech class at TJ. She was initially having difficulty trying to code a certain lab but quickly figured out the solution through determination.

First quarter is usually considered one of the more difficult quarters, especially for freshman. On top of homework and challenging classes, making friends and adjusting to high school can also prove to be a challenge. However, most freshmen felt that TJ was not as daunting as they expected it to be.

What were your expectations of TJ?

“Well first, the workload wasn’t as bad as I expected, and maintaining a good GPA was pretty easy as long as I studied. For the people,I thought everyone here would just be all science and math but I learned that the people here are more than that, they have a life,” said Meghana Gopannagari.

“Sometimes, especially when I don’t know how to do something,” said Joanna Cheng.

“Not stressed, more worried about how I would do on tests and if I can bring up my grades during the last week of the quarter,” said Meghana Gopannagari.

What classes stress you out?

“Well, compsci was bad because the teacher didn’t really give us any starters, and English was annoying because we didn’t have many grades in [the gradebook] including one grade which was really bad,” said Joanna Cheng

What is the best part of TJ?

“The community, like I feel like I have really grown closer to people, and the IBET community is so tight knit. I don’t know if this is what it’s like at other schools, but TJ is a safer and more welcoming environment,”  said Joanna Cheng.

“The community, we’re all in the same boat, especially the freshmen class. It was incredible seeing the school come together during hoco and how the other students at TJ, regardless of class, are willing to help [each other],” said Anvi Padiyar.

Do you regret coming to TJ?

“No, it’s a good choice. It’s difficult sometimes, but in the end it will always be worth it. And everyone can do it, some people just think they can’t,” said Joanna Cheng.

“I guess not. In stressful moments, you think about what it could be like at your base school but I feel [like] base school wouldn’t be as rewarding as TJ,” said Anvi Padiyar.