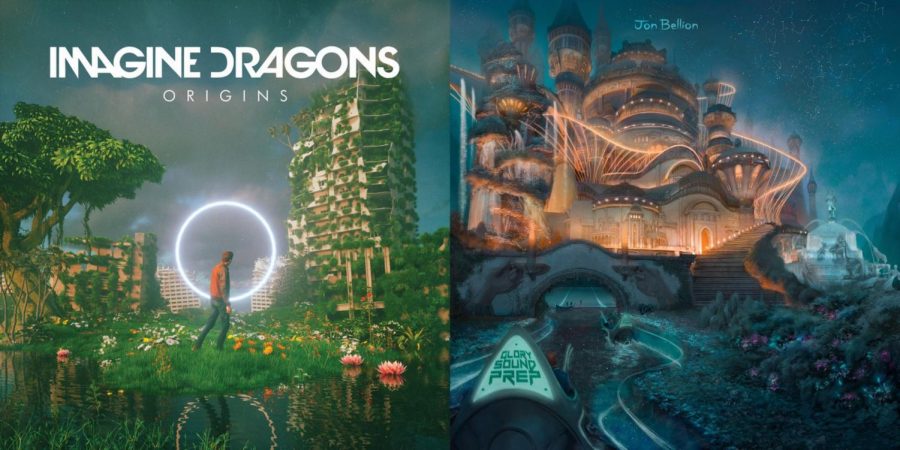 November 9th saw the release of both Imagine Dragons Origins and Jon Bellion’s latest, Glory Sound Prep, each reinventing the styles and songs that their predecessors set before them to achieve new heights for each artist.

In recent weeks, new chart-topping singles and hints of new albums, from Billie Eilish’s haunting “when the party’s over” to Ariana Grande’s surprise hit single “thank u, next”, have been popping up everywhere like wildfire. It’s a music rush that’s hard to ignore but difficult to keep up with. One could almost call it a last ditch entrance into the Grammys – except that cutoff was over a month ago; it’s far more likely the spring of new titles for the 2020 Grammys than anything else. But after a stagnant summer music release only barely redeemed by Grande’s Sweetener and Troye Sivan’s Bloom, this surge in the music industry is a welcome hallmark of the fall season.

In early October, two artists announced the release of their highly anticipated next album – Jon Bellion’s Glory Sound Prep and Imagine Dragons Origins, the latter of which being the more surprising considering how early into the normal album release cycle it had been produced. Jon Bellion had not been heard from since his 2016 album, The Human Condition, due to a lack of social media presence, while Imagine Dragons had recently released their album Evolve only a year before and were not expected to release anything for more than a year. Each teased with a few singles off the albums, both finally arrived on Nov. 9th, 2018.

Glory Sound Prep is quintessentially Jon Bellion – a solid blend of hip-hop and pop meshed into a cohesive whole, with some songs leaning more towards either side. I’m honestly not as into rap as most people are. Instead, the appeal of music to me lies in distinct vocals and instrumentals designed towards an intended emotion, not a simple rhythm or flow. But The Human Condition, Bellion’s previous work, is one of my favorite albums of almost all time. He can somehow work his rapping and vocals together into an at times heart-wrenching or impossible-not-to-dance-to repertoire. Glory Sound Prep on the other hand, attempting to live up to that impossibly high bar, almost misses it entirely.

While maintaining his signature style and messing around with both rhythmic beats and his warm vocals, Bellion has struck a few hits on his 10-song work. The opening “Conversations with my Wife” plays with themes of growing technological dominance in everyday life while bringing some head-bopping electronic beats to the table. “JT”, decidedly influenced by John Travolta, starts slow but is redeemed by an irresistible throbbing chorus. By far the most popular of the tracks, “Stupid Deep” expertly delves into themes of regret and loss but comes out with a lighthearted instrumental set that blows that all away. “Blu” switches between layered dream-like vocals and a preppy set of rhythmic vocals to combine into a masterful song.

But interspersed with some of his greatest, Bellion hits some all time lows. Lyrics are often repetitive and overused; the very same “Conversations with my Wife” consists of the same lines repeated twice over, and “The Internet” has very little saving grace from constantly repeating “Life became dangerous the day we became famous,” besides a last-ditch attempt with the final bridge of the song. The major gripe I have with this repetition isn’t simply that it exists – it’s the static level of the emotional aspects of the lyrics, vocals, and instrumentals that makes the song so uninteresting that it’s almost a chore to listen to. As a consumer of any type of medium – whether that be a song, a movie, or a novel – my key interest in it comes from a slow-build climax that keeps my interest piqued while progressing forward. Repetition is unable to provide that sort of emotional build-up and ends up feeling both lazy and contrived.

Besides those few standouts and common weakness, Glory Sound Prep has nothing really of note. “Let’s Begin” and  “Adult Swim” builds off sick beats to produce a solid rap song, but I was so disinterested with the lack of instrumentals and vocals that I’ve rarely played them. The penultimate “Cautionary Tales” attempts for a thumping dance diss but holds so little emotional weight that it’s another chore to wade through to listen to. The decidedly average “Couples Retreat” turns almost DJ-like in the long strings of instrumentals that mark its chorus, and “Mah’s Joint” is a heartwarming take on his mother’s caretaking of her own mother but almost overstays its welcome at the eight minute mark.

On the other hand, Imagine Dragons’ newfound Origins is almost entirely the opposite of GSP – despite a few let-downs, the album succeeds as a whole to bring a whole new style of the band to the table. This is in spite of the how early Origins arrived, out of the blue – the band’s world tour for their previous album Evolve having not even reached its conclusion, even today. The release reveal provided some explanation, stating that after Evolve “we just kept creating. And so we had these songs that we created after Evolve where we thought….we could wait a couple of years… and put it out, but then it’s going to be irrelevant to us. So we just thought, ‘Well, this is a new world of music, why don’t we put it out right now?’”

As a sister album to Evolve, Origins passes with flying colors. Exploring new stylistic tones and approaches with each new song, the band lives up to the expectations set by the record-breaking Night Visions and Smoke and Mirrors and breaks new ground. Some songs are decidedly Night Visions-esque, like the finale “Real Life” that invokes so much raw emotion of love and life and tumult. “Birds” and “Burn Out” pays tribute to the slow but loud sadness of Smoke and Mirrors with strong beats and longing vocals. “Only” and “Stuck” are not so different from the rhythmic “Yesterday” and “Walking the Wire” of yesteryear’s Evolve.

But besides expanding upon the tested formulas of previous albums, Origins, like every Imagine Dragons album, brings some decidedly new songs and styles to the mix. Tracks such as “Boomerang,” “Cool Out,” “Bad Liar,” and “Zero” use an addictive and head-throbbing quality that almost impossible not to jam out to. “West Coast” is one the first acoustic songs the band has produced in years, and “Love” discusses racial inequality and climaxes in a beautiful ending sequence.

Some new styles, unfortunately, fall flat on their face from the get-go. An attempt at a more rock-band approach results in harsh songs such as the introductory “Natural”, “Machine,” “Digital,” and “Bullet In A Gun,” which are difficult to enjoy and don’t fit well to the band’s strengths. But out of the many successes, these are rare and not entirely unappreciated (as seen in Natural’s longstanding iTunes chart place for the past several months as a pre-released single).

The music industry is one that’s growing very quickly and something that’s exciting to watch grow and evolve. Strong albums like Glory Sound Prep and Origins, even without being entirely successful, are steps in the right direction for each of their namesakes and a strong addition to each artist’s latest repertoire.