Upcoming rom-com stars a plus-sized actress for the first time- or does it? 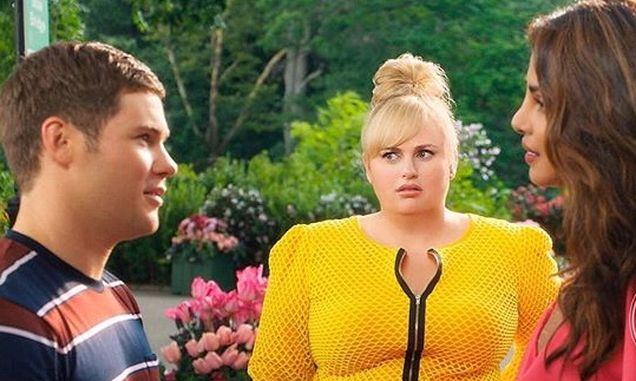 White doves flying in a heart formation, coordinated musical numbers at every corner, and kissing the man of your dreams in a red dress under the pouring rain -isn’t that just romantic? Upcoming movie Isn’t It Romantic starring Rebel Wilson, Liam Hemsworth, and Priyanka Chopra features an aspiring architect waking up after getting a concussion into what seems to be a PG-13 romantic comedy. While promoting her movie on The Ellen DeGeneres Show, Aussie actress Rebel Wilson opened up about how it’s like to star in a rom-com as a plus-sized woman.

“I had such a ball filming that,” said Wilson. “I’m proud to be the first-ever plus-sized girl to be the star of a romantic comedy.”

This one line was all it took to start the blazing trail of social media criticism. This comment stirred controversy amongst many people, particularly those who were African-American. Twitter users disagreed with Wilson on her being the first, plus-sized rom-com star, as African-American actresses Queen Latifah and Mo’Nique preceded Wilson in the rom-com industry as plus-sized stars. With Queen Latifah starring in Last Holiday(2006) and Mo’Nique starring in Phat Girlz(2006), Wilson seemed to have overlooked the achievements of other African-American actresses.

Wilson defended her claim by tweeting that it wasn’t all that clear if the actresses were plus-sized while filming or if the movie itself could be classified as a rom-com. She basically put the actresses in some kind of a “grey area”. This, however, would have been the perfect opportunity for Wilson to correct herself instead of attempting to defend her statement with an inadequate counterargument.

Soon enough, Mo’Nique herself stepped in and directly addressed Wilson on the issue by politely tweeting that she should not be “a part of erasing” her and other women’s talent by labeling them as grey areas. Mo’Nique wrote that Wilson should take a moment to get to know the history, which is a quite feasible task for Wilson to do. For years, African-American actors and actresses have been receiving less credit for their hard work and have even been denied equal opportunity to achieve things. This also applies to other ethnic groups, such as Latinos and Asians. It is important for people to be acknowledged for their accomplishments regardless of the color of their skin. It was unfair for a Caucasian actress to feel that it was acceptable to name herself the first plus-sized star of a rom-com, when African-American actresses have reached the same feat before her.

After receiving more criticism from many more internet users, Wilson finally acknowledged her wrongdoing and gave her sincere apologies to not only the public, but also other plus-sized actresses including Mo’Nique, Queen Latifah, Melissa McCarthy, and Ricki Lake. She recognized that she overlooked the hardwork and triumphs of other women by calling it her own.

“To be part of a problem I was hoping I was helping makes it that much more embarrassing & hard to acknowledge,” Wilson wrote. “I blocked people on Twitter because I was hurting from the criticism, but those are the people I actually need to hear from more, not less.  Again, I am deeply sorry.”

I think the lesson from this is that people, including celebrities, will make mistakes that will offend people of various groups, and it is our responsibility to remind them of what’s right. Wilson wrongly took the credit for another actress’ accomplishments, but in the end, she apologized and made amends, which must have taken courage to do when the whole world was watching.

About the movie as a whole, I think that it would be refreshing to see a rom-com starring a plus sized women once again after many years. Most of what we see on the screen is a woman who meets society’s standards of how females should look like(tall and slim) who gets the man in the end with plus-sized women appearing only as a sidekicks.

If this movie turns out to be a big hit, this could mean that producers would be more open to casting women of various sizes in lead roles, just like how Black Panther and To All The Boys I’ve Loved Before are popular because they star ethnically diverse actors. More viewers could relate to what’s being portrayed in the movie.

In the end, Wilson was able to recognize the harm she did by claiming other actress’ feats as her own and with the public’s help, she brought forth a thoughtful and considerate apology. Let this whole event serve as a reminder that there are people out there who have been wronged by people taking credit for their accomplishments and it’s up to ordinary people like you and me to prevent that from happening. This movie is definitely worth a watch whether it’s if you want to see something new show up on screen or if you’re just a die-hard fan of romantic comedies.