Blocking the Door to Progress: Combating racism in our everyday lives 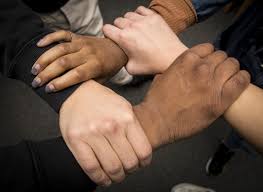 On October 17, a white woman blocked a black man from entering his apartment building.

Everyone has heard a story like this before. Honestly, it is a bit disappointing how common this occurrence is in our news.

It is clear that Thornton was wrong to block Toles from entering his own building, regardless of what she thought he was doing. However, racism is so deeply ingrained in our culture that half the time we do not even think about it when it is happening right before us. We, the people, need to improve our cultural awareness and reduce racism in our culture to prevent cases like this from repeating throughout history.

African-American citizens have faced discrimination throughout our history. In the beginning, that discrimination was through slavery.  So much was based on skin color. If you were white, you had the power and were free to use it anyway you liked. If you were black, white people took your power and oftentimes left you unable to fight to get it back.

Ask anybody what they think of slavery and they will say it was wrong to treat African-Americans in such a cruel way. And yet, people still regard African-Americans as inferior like they did in the time of slavery. Questioning whether African Americans belong in an apartment building is just a scratch on the surface of a long history of discrimination and racism.

The news is littered with stories similar to that of Toles. Think of the news you have read in the past year or so. Donte Robinson and Rashon Nelson, two young black men, were arrested for asking to use a Starbucks restroom. Twenty-year-old Hamdia Ahmed said someone at Dunkin’ Donuts called the police on her and her family after they spoke Somali while waiting for their order in the drive-thru. Nine-year-old Jeremiah Harvey was falsely accused of sexual assault by a white woman named Teresa Klein in a convenience store. Kiah Morris, Vermont’s only black lawmaker, quit after facing intense racial harassment.

These people faced countless issues because of the color of their skin. Nothing more. The ordinary is turned into a crime if you are black. Whether it’s speaking a native language or asking to use the restroom, African-American citizens are at an unfair advantage.

Racism is unacceptable, but sadly, African-Americans have accepted it as part of their reality. In a survey conducted by NPR, 92% of respondents said that racism and discrimination exist in their lives. Over half of them told NPR they had experienced discrimination in the workplace, being hired, paid and promoted unequally compared to their white counterparts.

NPR also included information from a study done by the Urban Institute. The researchers sent black and white actors of similar monetary status to realtors to ask about buying or renting properties. The realtors tended to show the white actors more properties than the black actors, and white actors were also offered more discounts on possible purchases. This conspicuous gap in working and sales environments is one of the many injustices African-Americans face on a daily basis, yet the sad truth is, they see it as be a part of life.

Some kind of belief in the supremacy of one race is evident in all of these stories. Supremacy is believing someone or something is better than someone or something else, but this isn’t toy shopping. No one thing will be better than another. What factual basis is there to consider one race superior to another? In short, why should the color of one’s skin matter at all?

With the “America is a melting pot” ideal comes the issue of how to preserve equality between all races, and there is no easy answer to that problem. D’Arreion Toles was denied a basic right because of his race, like so many African-Americans before him. We cannot solve this problem instantly, but we can improve our situation by trying to remove the racism so deeply set in our culture and treating one another as equals.

We are all individuals. We should be defined by our actions, not by our race.