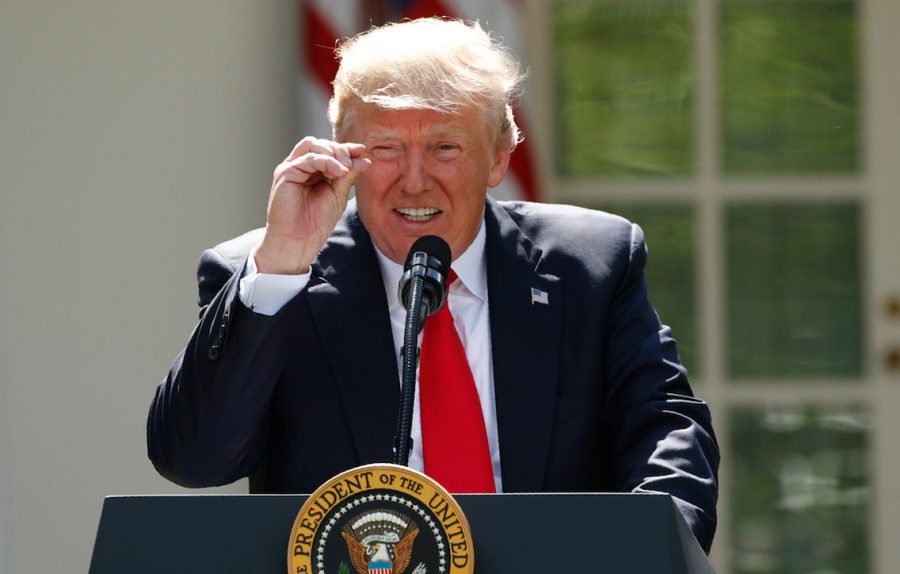 Trump announces withdrawl from Paris Climate Accord in June 2017.

President Trump said in an interview on Oct. 19th that he has a “natural instinct for science” and claimed that scientists disagree about whether climate change is caused by humans. However, scientists almost unanimously agree that climate change is a serious, human caused, and mitigable issue.

According to the EPA website, both temperature and atmospheric greenhouse gases are at record highs, and scientists have repeatedly shown a correlation between the rise of human-produced gases and the rise of temperature. Even NASA, which is run by a Trump appointee, disagrees with the President. It states on its website that “most scientists agree the main cause of the current global warming trend is human expansion of the greenhouse effect”, a direct counterargument to the President’s statements.

In the interview, Trump added that he is unwilling to take steps that may combat climate change, but his own administration acknowledged that the climate is worsening at an alarming rate. As reported by the Washington Post, the administration found temperatures would warm by 7 degrees fahrenheit by 2020. Even though such a temperature rise could have drastic effects on the U.S. and the world, Trump refuses to do anything that could reduce it.

There are many things Trump could do to mitigate climate change. He could participate in the Paris climate accord, which he withdrew from—the U.S. is the only country not in the agreement. He could also take steps to reduce emissions and prepare for a world with higher sea levels.

We can’t be sure that these methods would reduce climate change. Trump’s administration is correct that reducing emissions would cost a lot of money in the short term, and we can’t even be sure that it would make much difference at this point.

Still, Trump is putting the country at risk by not even trying to solve climate change, even though it is obviously getting worse. With rapidly rising sea levels, many places could be all but submerged in a few decades. NOAA has found that sea levels are rising by an eighth of an inch per year, and that flooding has increased drastically. Most of the ten most populated cities are on a coast, so even in a few years flooding will have severe effects.

Trump’s actions will strongly affect the future of the U.S. and the world. The evidence has been provided to him again and again—climate change is real, and steps could be taken to reverse it. So his decision not to listen to anyone, even his aides, is dangerous and may set climate change on an irreversible path.