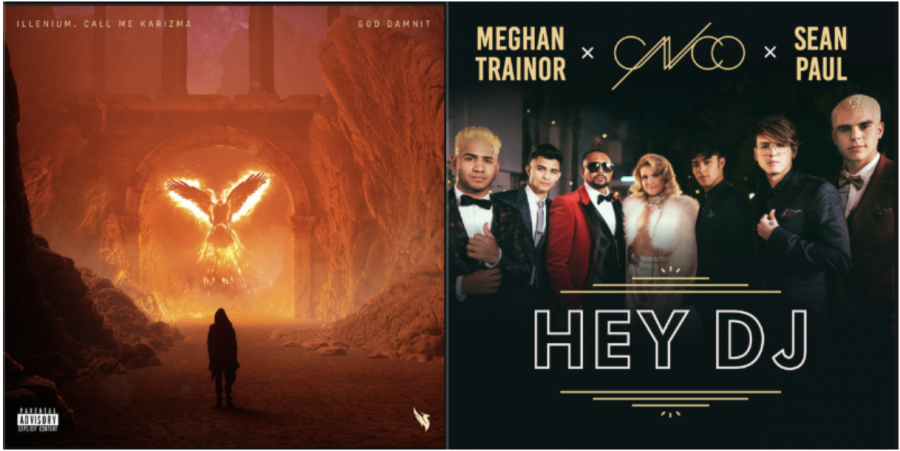 As soon as new releases pop up on my Spotify feed, I rush to add as many of the recommended songs I can to my playlist. With that burst of adrenaline, it is hard to pick just one song to showcase since they’re all breathtaking. For that reason, I’ve picked two songs on opposite ends of the genre spectrum for today’s Friday night vibes.

With songs like this, I applaud my decision to pursue learning Spanish. “Hey DJ” by CNCO featuring Sean Paul and Meghan Trainor is a Spanglish remix. In other words, the song “Hey DJ” was released earlier in CNCO’s sophomore album, but that song was solely in Spanish. Now with Meghan Trainor and Sean Paul, there is a beautiful twist that includes both the languages.

Trainor’s harmonies add a fresh touch to the song, and her vocals soar over the catchy beat. The lyrics are infectious, but it’s hard to focus on them when the tune is so mesmerizing. Something that surprised me was how much I enjoyed listening to Sean Paul’s part. Normally, I am not a huge fan of his. However, while his portion in “Hey DJ” is signature to his own music, it still blends well with CNCO. Honestly, I wouldn’t be shocked if this song is at the top of anyone’s dance party playlist, because I know it’s such a bop that it’s at the top of mine. And hey, you might even catch me throwing an impromptu fiesta just because of this song.

Lyrics are overrated, or at least that’s what I tell people who ask me why I listen to EDM. Don’t get me wrong, I love music with lyrics. However, sometimes less is more.

One of my favorite artists is Illenium, who finds powerful ways to express words through music. The dynamics he uses match the mood of the song, and the way the beats drop perfectly replicate how it feels to have your heartbroken. In Illenium’s newest song “God Damnit” featuring Call Me Karizma, the rap portions mixed in with the varying rhythm sent a chill down my spine because they were simply spectacular. In comparison to older songs of his, today’s song served a pleasant surprise with more lyrics than normal. However, these weren’t just filler lyrics, they served a purpose. The lyrics hit so close to my heart, as they referenced feelings of deteriorating mental health and losing someone you love.

I cannot stress enough how much I love this song, and how much I want the world to hear it. Illenium’s previous songs such as “Lost”  and “Take You Down” are so underrated it kills me. His music deserves the world, as it touches on so many feelings just through the power of instrumentals.

I can’t even get past the first minute without hitting the replay button.

Listen to “Hey DJ”, “God Damnit”, and the rest of my Friday night vibes playlist below: