Finishing on a high note 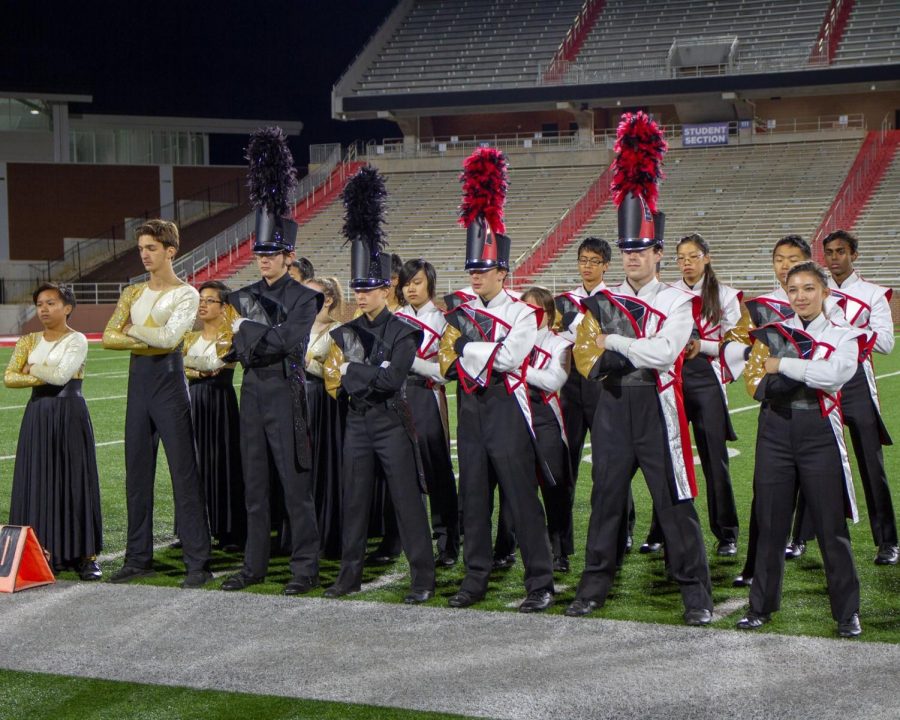 Decked out in their full performance uniforms, members of the Thomas Jefferson Marching Colonials pose at a competition. The group went on the road and brought their show in front of judges at Liberty University on Nov. 3. They did a total of five competitions this year and performed at the home football games.

The Thomas Jefferson Marching Colonials (TJMC) capped off their successful season last weekend on Nov. 3, placing 2nd in their class and 5th overall out of 38 bands at the state Commonwealth Cup with their show Fantasies in Gold.

Adam Foreman, the 15 year director of the band, was very proud of the season that his group put together.

“You can always look at results and trophies, but we don’t really measure ourselves that way,” Foreman said. “The real achievement of the year is just being around all the other bands in the state and putting on the best show that we can. Competitively it was a really nice season, but it is really the performances that matter to us.”

The band, which is an afterschool activity equivalent to playing a fall sport, has been growing in size in recent years. According to Foreman, they are up to 103 people this year, which is 12 more than they had before. However, recruitment is still a big goal for him in the future.

“Other groups have almost 100 more students than us, which makes it a little difficult to compete sometimes,” Foreman said. “We are looking to get to about 125 for next year. We just had a couple of really big freshman classes come in the last two years, so I hope it’s a trend.

Foreman also believes students should know that they can do after school activities like TJMC and take music classes while still doing well at a STEM school.

“Hopefully, the stigma that [doing band] isn’t possible is going away a little bit as more students do it and show that it can be accomplished, and there aren’t any real issues involved,” Foreman said.

Many students have found TJMC valuable because of the memories they have made while a part of the group.

“It’s the kind of group where if you don’t know someone at the start of the season, you’ll get to know them throughout,” freshman Ben Chang said. “I originally decided to join because many of my family members had done it in the past, but I think that having my friends in marching band made it easier – and more fun – to remain as a member of TJMC.”

“We made the finals, which was really exciting,” Amirneni said. “It was a really tough competition because it was East Coast Regionals, but we performed well.”

Foreman also has some favorite memories from the season that he thinks shape the way the band operates as a team.

“I love when they’re hanging out and enjoying each other,” Foreman said. “I never see a group of students as happy at TJ as I see the band students when they’re just in the band room after a football game, goofing off and joking around.”

Foreman’s personal favorite memory was the huddle after the band’s last show.

“Just looking around the circle, seeing all the students and how happy they were with how they had performed and what they had done, that’s always a great memory,” Foreman said. “The emotion was particularly strong that time because it had been a really great season and everyone had a lot of pride at what they had accomplished.”

Next year, Foreman hopes to continue ironing out some small technical shows to make their show as competitive as it can be. TJMC implemented a fitness program this year to help prevent injuries, which he plans to continue next year and he also wants to try out some new competitions. However, there aren’t many big changes in store for the marching band.

“Our trajectory is great and we’re just going to keep continuing on that trajectory,” Foreman said.