A journey down memory lane

Saudade: behind the scenes 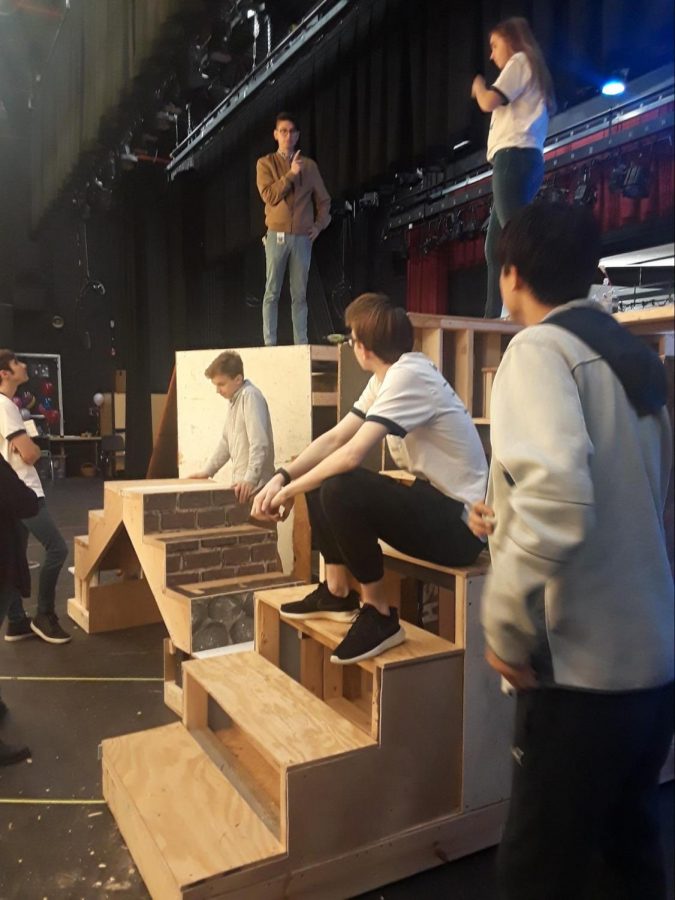 A group of actors and crew members listen to the director, Andrew Reid, give out instructions at the last practice before their first performance.

Saudade- a feeling of longing, melancholy, or nostalgia. This word is depicted through seven parts of a single story all tied together in the school’s fall play Saudade; the one where I miss you. The performances displayed by the cast and crew took place on Thursday, November 1st to Saturday, November 3rd at 7:00 PM and on Sunday, November 4th at 2:00 PM in the auditorium.

However, Saudade was not the original plan for the fall play.

“There were complications with obtaining rights for the original show I wanted to direct,” Andrew Reid, the scriptwriter and director for Saudade, said. “A couple of days before auditions, my rights were revoked and so I had to come up with something quickly. It just so happened that Saudade was a script that I had in my back pocket that was appropriate and that I felt like could still work to accommodate a bigger cast and still do something contemporary.”

Luckily the actors were able to quickly adapt to the new script, and in early September, auditions for the play were held.

“They showed up on an audition day and selected a side, section of the play, to read with a partner. Some people were then called back to read specific parts of the play so I could see actors in certain pairings and scenes,” Reid said.

The set consisted of many large wooden structures all crafted by students. Backstage, there were rooms for costumes, props, set building and a dressing room.

A few props were described by Lady Cris, the second prop master. “Right now, we’ve gotten some fake flowers and we have been arranging them in pots, we’ve made paintings that are gonna be used in the show and one of them has handprints all over it which are supposed to be the handprints of two characters and we made a curd of cheese,” Cris said.

Cris explains a special trick where they put an engagement ring inside a jar of peanut butter and smooth it over so it looks like nothing is there.

With so many tasks to complete, there were bound to be a few challenges such as trying to fill the pots to try to make them look full of flowers since there weren’t a lot and how an engagement ring could be put in a jar of peanut butter.

Despite all these challenges, Saudade was well received by the audience.

“The TJ Drama department always manages to go above and beyond. The sets were beautiful and big, the acting was fantastic, and the play was written very well,” sophomore Joshua Malley said.

“Saudade was, without a doubt, a school play,” senior Noah Holloway said. “The sets were hand painted, the actors were students, and the audience was small. Some might brush these away as mistakes, citing inexperience, or a lack of time and money by the drama department. That being said, I felt that these “issues” helped drive home Saudade’s message more effectively than any Hollywood film ever could.”

Students who went to see Saudade agreed that it was a sentimental and touching play.

“Saudade, at its core, recognized the humble memories we share with our closest friends,” Holloway said. “Rainy walks. Magic. Peanut butter. And, in my opinion, these memories shone brightly because of, not in spite of, the show’s simplicity. To me, Saudade felt less like a performance and more like a conversation, almost as if I were up on stage with the actors, reminiscing about family members and their silly quirks. In that sense, Saudade was a rousing success.”