Bringing About Justice for Jamal Khashoggi 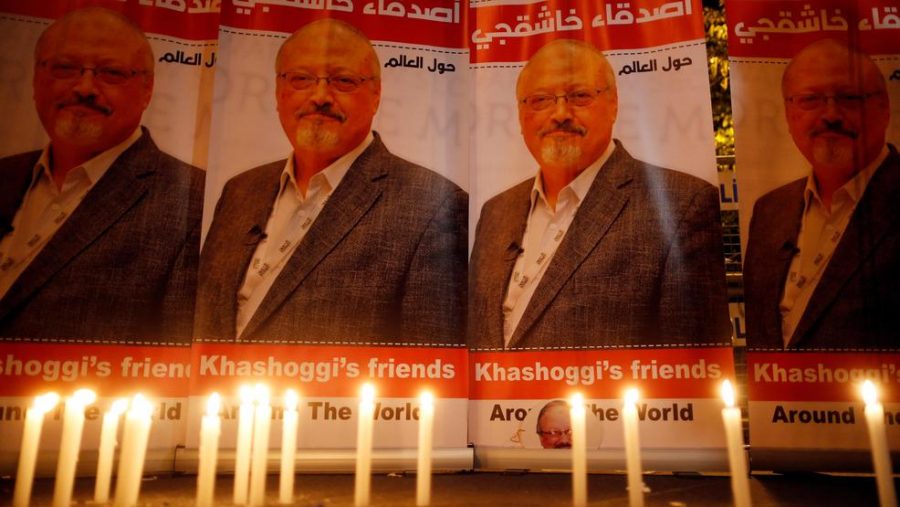 A memorial to the late Jamal Khashoggi

On Oct. 2, journalist Jamal Khashoggi entered the Saudi consulate in Turkey to marry his fiance—he never walked back out.

Evidence continues to build that Khashoggi, a contributor for the Washington Post, was brutally tortured and murdered in the consulate. At first, President Trump refrained from criticizing the Saudi government. Now, however, after three weeks, the United States has finally announced punishments against the Saudi regime.

Secretary of State Mike Pompeo announced that the United States will revoke the visas of key Saudi officials and is considering sanctions specifically to target human rights violations.

The alliance between the United States and Saudi Arabia is key to economic growth and political stability in the Middle East. However, even in our current toxic media climate, preserving the legacy of Khashoggi and setting an example for the rest of the world on the treatment of reporters should always remain first priority. Therefore, the White House made the correct decision in invoking punishments against Saudi Arabia at the possible cost of the alliance.

For one thing, supporting the Saudi regime in the wake of this atrocious act would have damaged the position and respect of the United States on the world scale.

US-Saudi relations have long been a source of much debate.The United States relies on Saudi Arabia to supply oil and arms, as well as to suppress the emergence of Iran in the Middle East, a country the US views as radical and dangerous. For these reasons, the United States has retained ties with the Sunni country even as Saudi Arabia has implemented sharia law and financed terrorists.

However, it is clear that in murdering Khashoggi, Saudi Arabia crossed a line, and the need for justice far outweighed the upsides of the relationship between the two countries. By announcing plans to impose sanctions on those involved in the attack on Khashoggi, the U.S avoided deepening the moral hole they have dug for themselves in the past.

Furthermore, support for the Saudis in the wake of Khashoggi’s murder would have further accentuated the hate against the media currently prevalent in the US and other countries.

The White House has contributed to the climate of media hate, with President Trump labelling outlets unsupportive of his administration as “fake news.” Just last month, Trump praised a legislator for body slamming a reporter.

In a year in which four journalists at the Capital Gazette have already been killed in the US, to take little action on the killing of another journalist would have perpetuated hate crimes in the US and abroad. As a staff writer for tjTODAY, this is an issue that particularly resonates with me.

Finally, the more the United States supports Saudi Arabia despite such egregious acts, the more difficult it will become to criticize the Saudi government without facing severe anger and retaliation from the Middle East country later down the line.

Supporting the Saudis over securing justice for Khashoggi would have strengthened the relationship between the US and Saudi Arabia. However, the more firm bonds become, the more difficult it is to break them later. Therefore, had we continued to stay on the Saudi’s side, the consequences of future threats from the US to our intimate relationship with Saudi Arabia would simply have been intensified.

Many have cited the importance of the relationship between the United States and Saudi Arabia in order to defend not taking action against the Saudis for Khashoggi’s murder. However, many of the consequences of a possible fallout are not as extreme as they are made out to be.

Though the administration has previously stated that supporting Saudi Arabia is necessary for preserving stability in the Middle East and preventing the emergence of Iran, Saudi Arabia is just as radical in its actions and beliefs as its Shia neighbor. Given that the previous administration under Obama tilted the Middle East towards Iran influence with little negative impact, the statement by the White house appears to be little more than an excuse.

One of the main aspects of the US-Saudi alliance is the high volume oil trade between the two countries. If our economic relationship with the Saudis were to end, a decrease in oil supply would likely increase oil prices in the short term, but ultimately increase motivation to build dependency on renewable energy and reduce the use of oil and other fossil fuels.

Overall, ensuring justice for Jamal Khashoggi is clearly more important than the alliance between the US and Saudi Arabia, and the White House acted accordingly.

A free press unaffected by taunts and brutality is key to a world in which all of us can exercise our unalienable rights without fear of retaliation. Thus, the decision provides hope for a safer and brighter future not only for our reporters, but all students at Jefferson.