Omeish volunteers for the Obama campaign 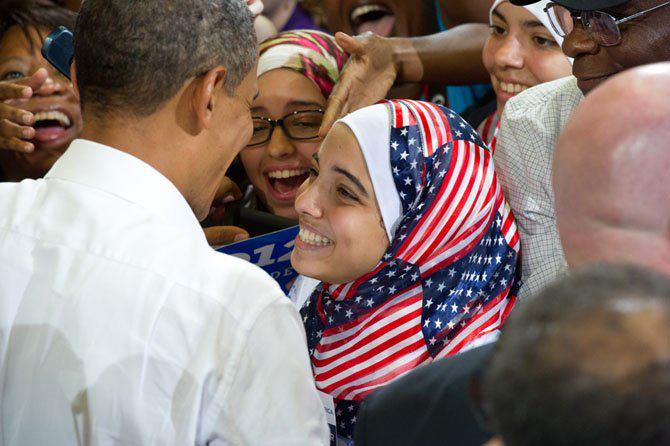 Junior Anwar Omeish stood face to face with President Barack Obama. Amid the rally frenzy, Omeish’s emotions can be summed up in one word: excitement. Omeish met Obama at his Centreville High School campaign stop on July 14. She was there as part of her vol­unteer work as a part-time organizing fel­low for Obama for America.

“As someone who has always been inter­ested in not only politics but also in equal opportunity, it was gratifying to finally meet one of the people who I feel like is pioneer­ing that,” Omeish said.

Omeish dedicates over 15 hours a week to the campaign effort. Her jobs span from canvassing, phone banking and voter regis­tration to administrative work such input­ting data and setting up packets and maps for canvassers.

“We want to spread the president’s mes­sage and explain to voters why he is the right choice for this country,” Obama for America field organizer Niket Todi said. “We do this primarily through phone calling and door knocking. We also do voter registration to help people empower themselves.”

Omeish finds that the most satisfying part of her work is the interaction with people in the community because ulti­mately, her campaign work is for them.

“One of the most rewarding experi­ences is being able to mobilize the com­munity to change the way we look at different members of our society and the way we make policy so that everyone can live a better life,” she said.

Before Omeish began working pri­marily at the Obama for America Falls Church office, she had already immersed herself in politics by making phone calls for the 2008 Obama campaign.

“I’ve been a Democrat since birth, and I’ve been going to rallies since the age of four. My family, my dad especially, has always been pretty involved,” she said.

Omeish’s interest in politics makes her aware of what is appealing about Obama.

“He’s putting us on the right track both fiscally and socially, and I really think he’s working towards equal op­portunity for everyone,” Omeish said. “He cares about what he’s doing, and he’s passionate about it. That’s really im­portant to me, and when I look at other candidates, I don’t see that.”

Omeish plans to help out with future campaigns and seek a career in interna­tional relations or political science.

“When you go out and you meet peo­ple who are suffering and people who are actually affected by lawmaking, you realize how important it is to fight for the things you believe in,” Omeish said. “It’s definitely something I want to continue for the rest of my life.”