A message from the resistance, sent through the form of a frozen dessert 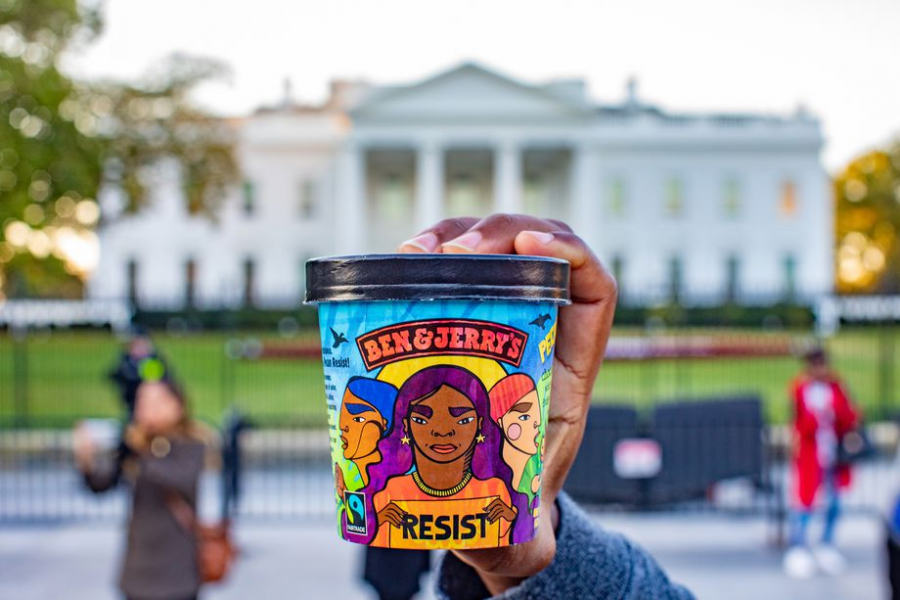 It’s promoting diversity, climate change, and political activism – all served in one container. But it’s also a quick way to get free advertising for the ice cream company, and the existence of the “Pecan Resist” has already created more divides in this politically polarized era.

Ben and Jerry’s recently came out with a new ice cream flavor, dubbed “Pecan Resist” due to its “chocolate ice cream with white and dark fudge chunks, pecans, walnuts and fudge-covered almonds”, according to the company’s website. Not only is the ice cream literally representing diversity, with the ice cream’s ingredients all varying shades of melanin, but Ben and Jerry’s is teaming up with organizations to “resist” the Trump administration’s policies.

“We can peacefully resist the Trump administration’s regressive and discriminatory policies and build a future that values inclusivity, equality, and justice for people of color, women, the LGBTQ community, refugees, and immigrants. Pecan Resist supports four organizations that are working on the front lines of the peaceful resistance, building a world that supports their values.” said the company’s website. The four organizations are Color of Change, Honor the Earth, Neta, and Women’s March.

“We can no longer remain silent in the face of President Trump’s policies that roll back decades of progress on racial and gender equity, LGBTQ rights, climate change and refugee rights.” said the company’s official Twitter page. And as all things controversial go, some were not happy about it (on Twitter, obviously, which is where most go to voice their distaste).

“Will make sure NOT to buy any of your ice cream. Thanks for alienating half of your potential customers.” said one Twitter user. Others added, “As much as I really like Cherry Garcia, I’m taking my business elsewhere”

Ben and Jerry’s is known for putting out controversial creams, most promoting a more liberal agenda. In the past, they have made flavors such as “Yes Pecan!” in 2007, which raised money for the Obama campaign, and “Bernie’s Yearning” in 2016, supporting Vermont Democrat Bernie Sanders and his then presidential campaign. The difference this year is that Ben and Jerry’s put out a flavor that openly dissed the president.

Now, let’s be honest; it’s an ice cream flavor. Is it going to cause a political upheaval amongst grocery shoppers and ice cream-lovers across the country? As fun as that may sound, no. Unlike those angry Twitterians, I don’t mind companies taking a political stand, mainly because I consider myself to be politically tolerant. Nowadays, we’ve all grown accustomed to companies using their platform to raise awareness for progressive causes. The problem is, everything seems like it is for or against President Trump. These brands aren’t just raising awareness; rather, they are waiting for the subsequent media attention that everything Trump-related gets and relishing the free publicity and advertisement.

Don’t like their message? Don’t buy it. But, whether or not you buy the ice cream, Ben and Jerry’s will donate $25,000 to each of the four aforementioned organizations.

“Welcome to the resistance. Together, Pecan Resist! … We celebrate the diversity of our glorious nation and raise our spoons in solidarity for all Americans.”, as written on the ice cream’s carton.

I’m not sure how much buying into the resistance will be civic engagement, but if you want to buy the ice cream just for the sake of the ice cream, by all means go for it. The only problem with this message? For the pun to work, it is implied that pecan is pronounced “pee-can”, which in my opinion is more controversial than the whole anti-Trump kerfuffle.