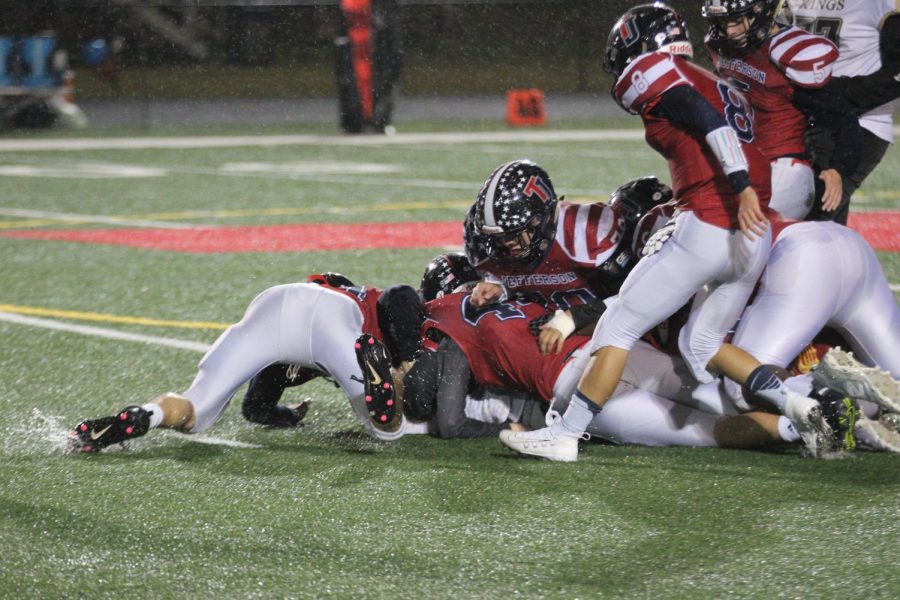 A group of Colonials stuff a run attempt by the Kings

The game, a rematch of last year’s homecoming game win, was the Colonials’ final match of the season and was played in pouring rain. With the win, they finish with a final record of 2-6.

“Coming into the game, the team’s goals were to have a good send off for the seniors. We all worked hard and we wanted to show what we had for the very last time,” Jun Chong (9), running and defensive back for the Colonials, said.

Within the first minute of the game, the stadium lights shut off due to a power surge, and play was delayed for fifteen minutes.

Following the delay, the Colonials drove the ball down the field, using short pitches from Quarterback Sohail Mohanty (4) to his RBs to gain large chunks of yardage and ultimately, a touchdown from running back Justin Kim (16) to put the Colonials up 8-0.

As the game unfolded, the Colonials continued to open holes for the running backs to power through and often break tackles. Running backs Chong and Kim accounted for three of the team’s four touchdowns — wide receiver Evan London (82) caught the remaining touchdown.

“To win in such a blowout manner in my last game shows how far the team has gone and the players have grown since my freshman year when we lost every game,” Walker Haynes (5), wide receiver and linebacker, said. Haynes collected his tenth sack of the season in the game.

On the defensive side of the ball, the Colonials forced turnovers in the red zone and rarely missed tackles. Captain and linebacker Matthew Cohn (53) in particular made numerous individual tackles to keep the opposition from breaking free.

“This team has been different from any other in my TJ experience. Despite having less than any other year, we never gave up,” Cohn said.

Following the win, the team drenched head coach Bill Rechin in ice-cold water to celebrate his contributions throughout the season.

“I can honestly say, this group of young men, come out every week, work hard and perform to their best abilities. They have more character than I have seen from other bigger, more numbered teams of the past, and they definitely have more heart than previous teams i have coached,” Rechin said.

For the departing seniors on the team, the game was a fitting ending to their time at Jefferson.

“It means a lot to win like this on my final game. Although I don’t want it to end, I would much rather prefer leaving on a high note,” Chong said.

And despite the struggles faced over the years, players emphasize the idea that wins are not the only goal.

“Football at TJ was a lifestyle. The people whom I played with are now members of my family. By playing football at TJ, it has shown me that no matter what class or obstacle is in my way, I can persist through,” Cohn said.

With 13 seniors graduating this year, it will be up to remaining and incoming varsity team members to fill the gaps left behind and build on the positive momentum established this year.

“We were able to finish this season with our best record since 2013, score the most total points since 2015, and give up the fewest total points since 2013. A lot of the guys that played on the varsity team this year will be returning next year, and they deserve the chance to continue building upon the foundation that was laid this year,” Justin Myalil (58), offensive and defensive lineman, said.