Digging into the true origins of this season's signature flavor 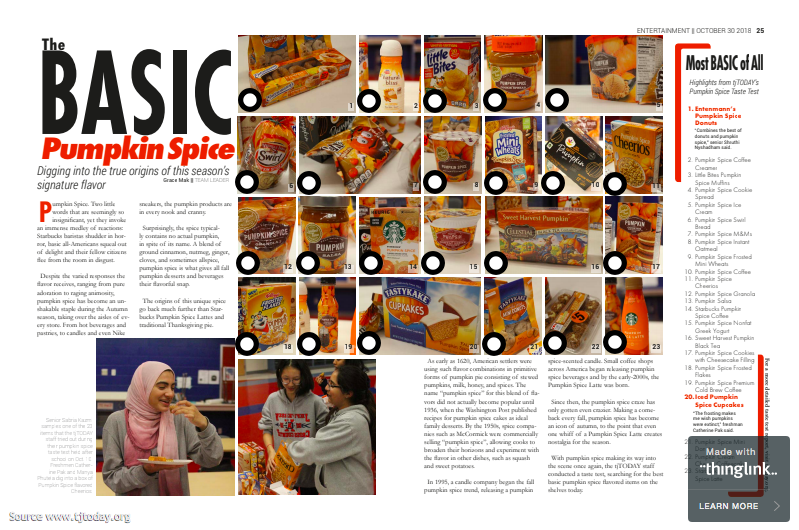 Pumpkin Spice. Two little words that are seemingly so insignificant, yet they invoke an immense medley of reactions: Starbucks baristas shudder in horror, basic all-Americans squeal out of delight and their fellow citizens flee from the room in disgust.

Despite the varied responses the flavor receives, ranging from pure adoration to raging animosity, pumpkin spice has become an unshakable staple during the Autumn season, taking over the aisles of every store. From hot beverages and pastries, to candles and even Nike sneakers, the pumpkin products are in every nook and cranny.

Surprisingly, the spice typically contains no actual pumpkin, in spite of its name. A blend of ground cinnamon, nutmeg, ginger, cloves, and sometimes allspice, pumpkin spice is what gives all fall pumpkin desserts and beverages their flavorful snap.

The origins of this unique spice go back much further than Starbucks Pumpkin Spice Lattes and traditional Thanksgiving pie. As early as 1620, American settlers were using such flavor combinations in primitive forms of pumpkin pie consisting of stewed pumpkins, milk, honey, and spices. The name “pumpkin spice” for this blend of flavors did not actually become popular until 1936, when the Washington Post published recipes for pumpkin spice cakes as ideal family desserts. By the 1950s, spice companies such as McCormick were commercially selling “pumpkin spice”, allowing cooks to broaden their horizons and experiment with the flavor in other dishes, such as squash and sweet potatoes. In 1995, a candle company began the fall pumpkin spice trend, releasing a pumpkin spice-scented candle. Small coffee shops across America began releasing pumpkin spice beverages and by the early-2000s, the Pumpkin Spice Latte was born.

Since then, the pumpkin spice craze has only gotten even crazier. Making a comeback every fall, pumpkin spice has become an icon of autumn, to the point that even one whiff of a Pumpkin Spice Latte creates nostalgia for the season.

With pumpkin spice making its way into the scene once again, the tjTODAY staff conducted a taste test, searching for the best basic pumpkin spice flavored items on the shelves today.