Seniors Ananya Pathapadu, Gopika Pillai, and Yujung Lee find relaxation and joy in what Cultivators of the Earth has to offer 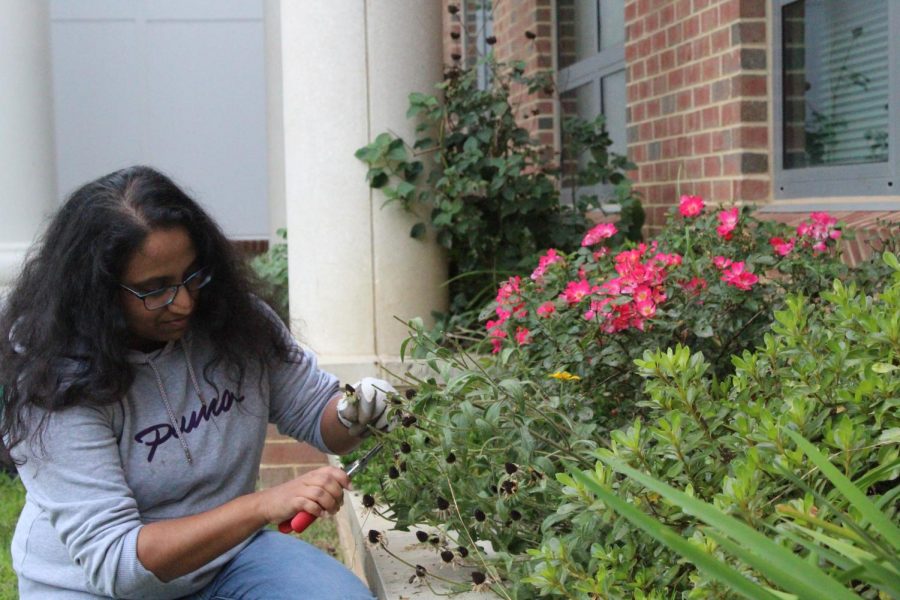 During Cultivators of the Earth's weekly meeting, senior Gopika Pillai uses a plier to cut the tips of dead flowers among the rose pink garden.

With less than an hour remaining until the end of school, senior Ananya Pathapadu grabs some gardening tools and puts on a pair of gloves ready to begin the period. It is here that Pathapadu, along with her friends and classmates, will care for the flowers and shrubbery in the facade of the school, preserving its beauty and aesthetic appeal.

Though Cultivators of the Earth was not recognized as an “official” club by the school until this year when it took on the roles of Greenhouse Club, Pathapadu first got involved in the club last year through her HUM II English teacher, Mrs. Klein, who introduced the prospect of participating in the club. Soon after, Pathapadu found herself as a regular member of the club, participating various activities ranging from planting flowers, pulling weeds, and watering the garden around the school.

Pathapadu continued to attend the club’s weekly meetings to pursue her hobby of gardening without taking up time outside of school. In addition, many Cultivators of the Earth participants, including Pathapadu, pointed out several benefits of the club’s activities.

“[Cultivators of the Earth] is actually a lot of fun and gardening is something that I personally enjoy and because of TJ and the workload we have, I don’t get to do it year round,” Pathapadu said. “So, if I can take a part of my school day and set that aside for gardening, I think that’s a great way to spend my time It’s also just a nice relaxation and really de-stressing.”

Aside from the enjoyment that the club provides, Pathapadu regularly strives to give a good, appealing impression of Jefferson through direct works to the school.

“We contribute to the beauty of our school and I think there’s a lot of clubs that do things on the inside, but when any person or any visitor walks in, the first thing they see is the big dome, the grass on either side, and our flowers on either side, and that brings beauty to how our school looks, and I think that’s really important.” Pathapadu said.

Similar to Pathapadu, senior Yujung Lee was also introduced to Cultivators of the Earth through her HUM II English teacher, Mrs. Klein, after learning that she was the sponsor of the club. Due to other commitments for various activities, however, Lee was initially unable to join Cultivators of the Earth during her sophomore year, but eventually managed to do so by the next year.

“I’ve always wanted to join this club since sophomore year… I saw my friends carrying pots outside of school and planting them, but I didn’t really have a chance to do it because of other commitments,” Lee said. “But actually, Ananya and I were in the same HUM II and we realized Mrs. Klein was sponsoring the club, so that’s how it got started.”

Though both Lee and Pathapadu were initially skeptical of the club, they both realized the beauty and joy of participating in Cultivators of the Earth through both firsthand and secondhand experience.

“As we started the club and interacted with the seniors who were taking care of the plants, we were actually motivated by [their efforts] and so we continued to participate in the club,” Lee said.

In a highly competitive environment centered around science and technology, Lee shared the importance of the club and what it has to offer among the other extracurricular activities at Jefferson.

“[Participating in Cultivators of the Earth] is definitely relaxing and that’s part of the reason why I come to this club, but it’s also the only club I think that gives the students the opportunity to show their passion and love towards their school and it’s the only that takes care of the school’s appearance itself,” Lee said, “And that’s really important because people pass by the school everytime, and even if they don’t know what our school is like, it’s really important to give that first impression to the people.”

What makes Cultivators of the Earth so special to many people involved, including Lee and Pathapadu, is that the club offers a place for anyone to give back to the school in a fun and enjoyable way.

“I think it’s the atmosphere of the club that makes it so special. We don’t have any officers and it’s really just students coming together and wanting to make this school prettier,” Lee said. “What made us come to the club was not for an officer position or for its name value, but we really enjoy taking care of the school and the plants.”