Following tours to the Peterson’s House and Ford’s Theatre, students and teachers of HUM II were forced to leave during the play Born Yesterday 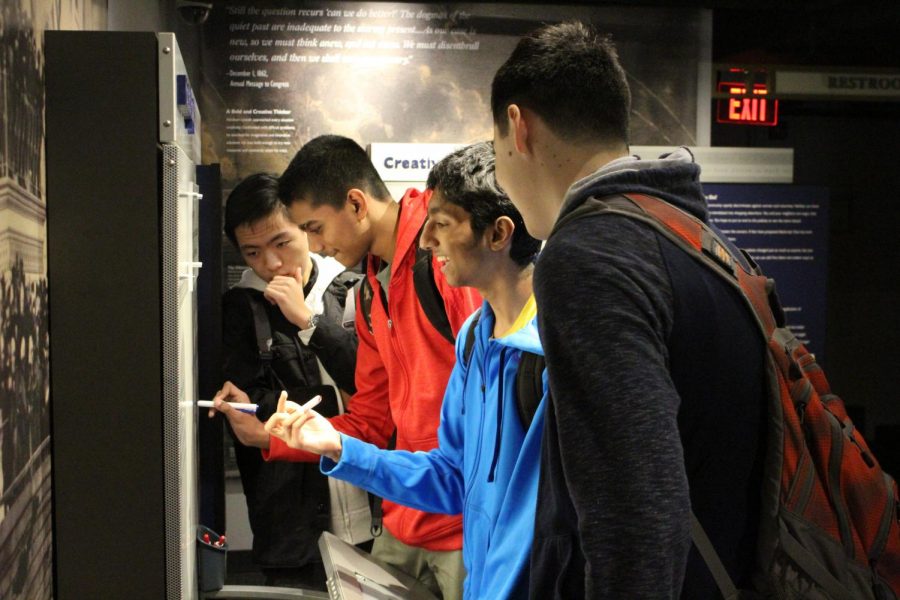 While touring the museum in the historic Peterson’s house, juniors Oscar Su, Praveen Balakrishnan, Aneesh Boreda, and Daniel Carr stop to write thoughtful responses on an interactive whiteboard asking them what equality meant to them.

During HUM II’s field trip to D.C. on Oct. 18th, Jefferson students had to cut their visit to historic sites, such as the Peterson’s House and Ford’s Theatre, short due to errors in the bus schedule.

Due to a series of unfortunate miscommunications between teachers and charter bus drivers, the performance, Born Yesterday, was cut approximately 30 minutes short, and students were left confused at the abrupt ending and lack of closure.

“They informed us beforehand that we were not going to be able to watch the whole thing, so initially I wasn’t very sad or bothered about it,” junior Mihir Sanad said. “To be honest, it was boring in the beginning, but then towards the second half when it got interesting, that’s when I started to feel like I really want to watch it.”

Like Sanad, junior Samyog Lamsal was initially unaffected by the sudden, unexpected decision to leave the theatre during the performance but was captivated by the narrative of the play and disappointed that he couldn’t see the rest of the performance.

“When I first heard it, I didn’t really care that much because I didn’t actually see the play, but then as we got to the play, I was really invested near the end and then when we had to leave early, I was really sad I didn’t get to see the ending,” Lamsal said.

Despite leaving not watching the entirety of the play, for Sanad, the performance paved great insight into the way of life half a century ago.

“We watched the play Born Yesterday and it was a very interesting look into the life in the 50s. It was a great insight for kids like me who obviously weren’t born there, so I was able to see how people lived and talked,” Sanad said.

Despite the fact that the trip was unexpectedly cut short, prior to the beginning of the play, students had the opportunity to gain a deeper understanding of history while touring historic sites such as Peterson’s House and Ford’s Theatre.

“Though trip was not completely related to our history curriculum, we learned a lot about that time period in America, how it’s relevant to different parts of the country, and how it impacted the global view of the United States and that was very crucial to me.”

On top of that, several students found many aspects of the trip interesting and entertaining during their tour of the Peterson’s House and Ford’s Theatre as they viewed galleries and collections of historical photographs, documents, and artifacts dating back to era of the Civil War and Lincoln’s assassination.

“[The Peterson’s House] looks like a really small house from the outside, but once you go in, you realize it’s like a multi-story building,” Lamsal said. “There’s an elevator fix that takes you to the top floor and as you walk down, you see all the different parts of Lincoln’s assassination such as where he died, which is really interesting.”

As the teachers of HUM II wanted students to take away something from the experience, Sanad shares what he got out of traveling to D.C. to tour the Peterson’s House and Ford’s Theatre by relating what he learned in the field trip to what he is currently learning in his English and History classes.

“One thing that we learned a lot in English is how to connect what we’re learning, what we’re seeing, and what we’re experiencing,” Sanad said. “To truly find out what makes us as Americans special, we need to look back into history and then connect that. As I’m looking at the different periods Lincoln lived in, what he was fighting for, and his morals, I realize that they truly represent what an American has to be and what an American citizen embodies.”