Look What You Made Taylor Swift Do 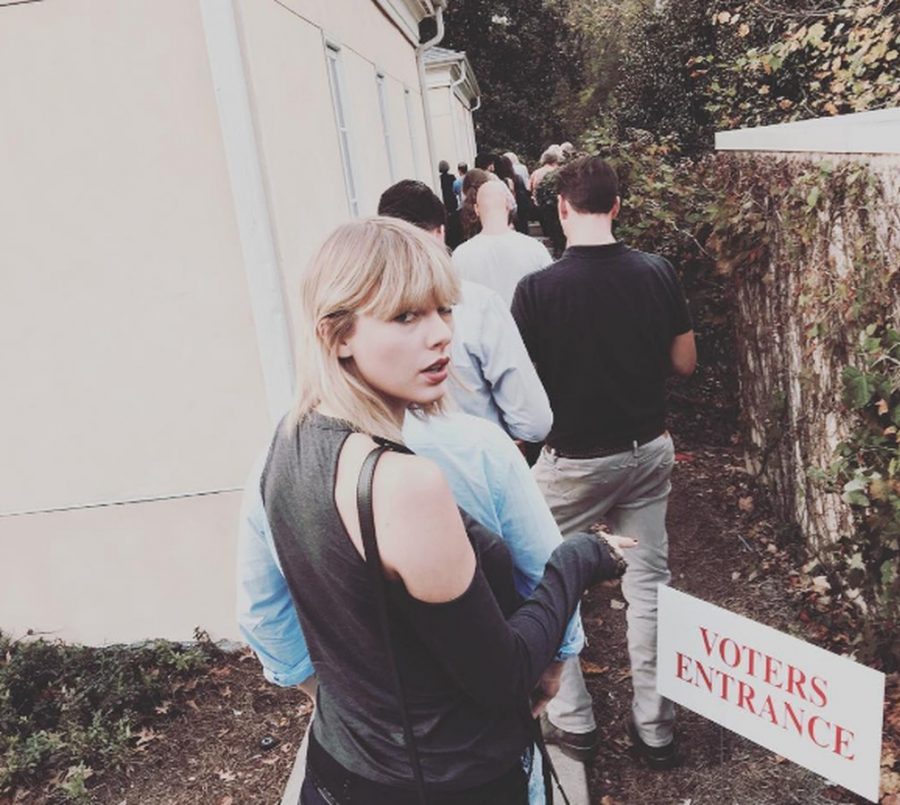 Taylor Swift encourages her fan-base to go to the polls. Photo courtesy of @taylorswift via Instagram.

Listen up, Taylor Swift is making headlines again. And no, it’s not about a new boyfriend.

Recently, Taylor Swift came out on Instagram rallying fans to go out and vote early for the midterm elections and gave her support to Democratic politicians in her home state of Tennessee.

“I will be voting for Phil Bredesen for Senate and Jim Cooper for House of Representatives,” Swift wrote in a lengthy Instagram post on October 7. “Please, please educate yourself on the candidates running in your state and vote based on who most closely represents your values.”

I was probably not the only one surprised by this post, considering Swift in the past has tried to stay out of politics. As much as I love Taylor Swift, I was hesitant in my enthusiasm for her statement. It was nothing short of controversial, and I knew she was going to get berated for it. Besides that, however, she shared an important message that I admired: vote for who supports your beliefs.

Was it necessary to alienate a portion of her fan-base? Well, no. Was that her goal? Again, no. Many on social media came out saying that they had lost their respect for Swift, and that they wished she had stayed out of politics. But, she has the right to share her opinion on politics. The issue nowadays is that everything in life has to be partisan; a celebrity can come out and support certain candidates like you and I would, but end up receiving backlash from all around. Hate crimes will occur in America and some have to blame them on certain people from certain parties. I am disappointed in those fans who say that they won’t be listening to her music anymore because she came out supporting Democratic candidates; the wall that politics now builds between everything we do is tearing our country apart. It is the freedom of expression that allows us to choose whose music we listen to, but open-mindedness and an acceptance of the opinions of others that allows us to look past those differences in political beliefs. In the end, they’re irrelevant to the quality of music artists produce.

Besides losing some fans and angering those on the right, another source of hypocrisy Swift’s post is receiving is about supporting female candidates.

“Running for Senate in the state of Tennessee is a woman named Marsha Blackburn. As much as I have in the past and would like to continue voting for women in office, I cannot support Marsha Blackburn. Her voting record in Congress appalls and terrifies me.” Swift then went on to include Blackburn’s voting history in Congress, such as “vot[ing] against equal pay for women” and “vot[ing] against the Reauthorization of the Violence Against Women Act”. She added, “These are not MY Tennessee values.”

Political pundits came out saying that Swift was not supporting women by not voting for them for office. But as Swift said in her post, she is voting for those who align with her values. Marsha Blackburn is a Republican, and Swift clearly has more liberal views. Why does it matter what gender that candidate is? It was the same logic of identity politics that cost Hillary Clinton the 2016 election — you aren’t guaranteed the presidency just based on your sex.

All controversy aside, Swift is sharing an important message with all of us, and invigorating young adults to go out and vote.

“So many intelligent, thoughtful, self-possessed people have turned 18 in the past two years and now have the right and privilege to make their vote count.” Given her enormous platform, with 112 million Instagram followers and the two million likes the post generated, I wouldn’t be surprised if we saw a large turnout in young voters this year. Karmari Guthrie of Vote.org told The Washington Post that less than 48 hours after Swift’s post, more than 169,000 new people had registered on the site to vote.

“One thing is clear, we’re seeing a massive surge in the 18 to 24 and 25 to 29 voters, which is her fan demographic. The 18 to 24 number almost doubled overnight,” Guthrie said to the Washington Post.

Swift has got her fans, perhaps now ex-fans, and even those who couldn’t care less about her music talking on Twitter. No doubt that she’s is turning things up as the midterms near. She even garnered fans to share their first-time-voting stories, and posted their pictures on her Instagram story.

We’ll see how the midterms play out; Taylor Swift has definitely got both sides of the political spectrum talking. Even President Trump shared his opinion on her statement, telling reporters on October 9th,

“Let’s say that I like Taylor’s music about 25% less now, ok?” Which, I guess is not too much considering the impact Taylor just made in Tennessee and on young voters across the nation. One thing’s for certain: Taylor Swift has got a big reputation, and she’s letting us all know it.