Support from the Stands 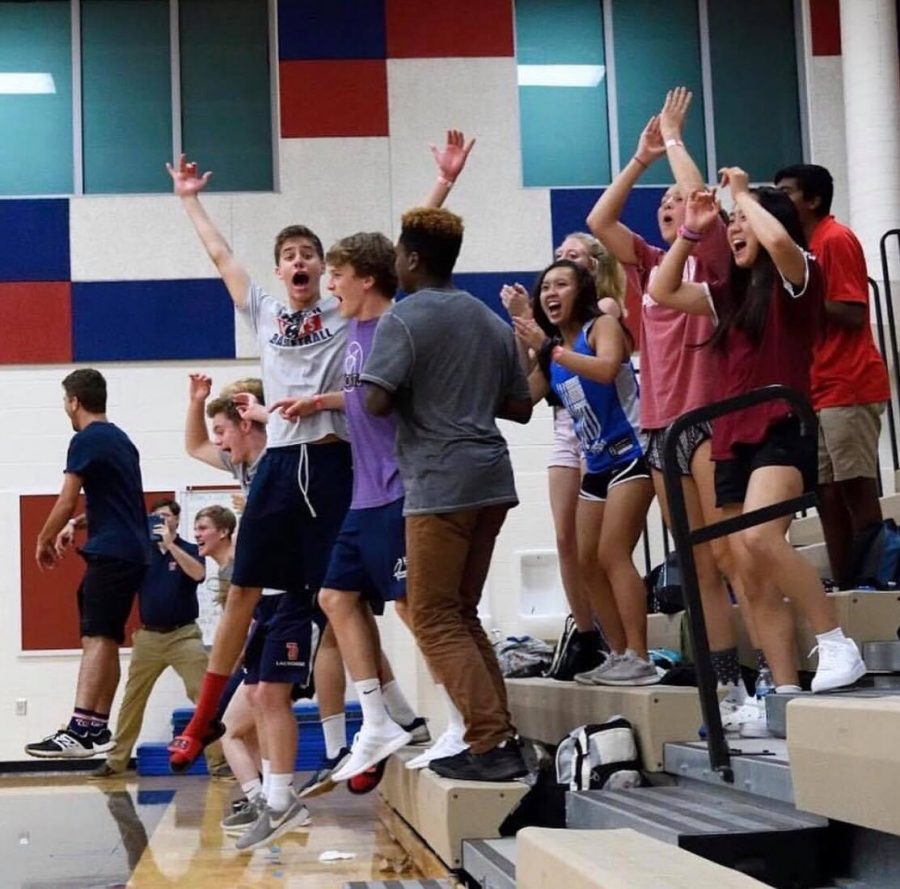 During a Jefferson volleyball home game against Marshall High School, senior Will Pemble in purple cheers as the team scores a point.

On a crisp Friday evening in October, football players play proudly on the field bearing red and blue jerseys, the colors of our school. “JEFFERSON” is stitched in bold letters across the front, and students in the stands scream in support for the team. Senior Will Pemble stands among his peers cheering with all the energy he can muster.

Pemble, a fellow Jefferson athlete who has played on the varsity basketball team since sophomore year, wants to change the culture of school spirit at Jefferson.

“I feel like a lot of people talk about how much school spirit that we have, and to me, I don’t really see [it]. Homecoming week is really special, and the energy’s great, but that’s more for individual classes. [I wanted to] harness some of that energy and try to channel it into energy that can be used against other schools, at our sporting events,” Pemble said.

Besides turning up for almost all sports games year round, Pemble has created an Instagram account, @monticello_maniacs, and consistently advertises games on Facebook groups. Going to watch games  with his friends is a way for him to destress and support friends, which is especially important in the highly competitive environment at Jefferson.

“What [athletes are] doing is representing our school. They’re wearing Jefferson on their jersey, and we’re all part of that school,” Pemble said. “[School spirit] is being willing to sacrifice some of your time to go out and support the athletes who are giving up their time every night of the week for many months of the school year.”

Pemble’s work and enthusiasm has paid off, as football coach and teacher Michael Auerbach has noted.

“[The crowd at the Back to School Bash football game] was bigger than I had seen in a long time. [A large crowd] does motivate the kids. If there’s a big crowd, they want to try harder. They want to play well. They want to impress their fellow students,” said Auerbach.

Not only does showing up to games help the athletes perform, it’s also an experience to treasure as an audience member.

“For me it’s basketball, for someone else it might be volleyball, or field hockey or something else. It’s fun to be able to go out and support [the athletes]. I’ve gathered up a new group of friends that I haven’t really talked to before, but we’ve been through everything together, and it’s just been great buying props before games, making posters, and hanging out,” said Pemble.

Some of these friends who also help advocate for more audience participation in sports are seniors Mallory Brodnik, Vivian Lin, Todd Hartman, Rohan Chaturvedula, and Zane Givans. Along with improving the morale of athletes and being a memorable experience for students, standing in the bleachers to watch and cheer could also motivate students to join the sport.

“When a big crowd comes out, and they watch us play a game that looks like it would be fun to be a part of, out of the hundreds of students in the stand, maybe there are five or ten who look at that and go, ‘you know, I would love to be part of that next year,’” Auerbach said.

Pemble couldn’t agree more about the value of playing a sport. When talking about what playing basketball has meant for him, his voice grows fond.

“[Basketball] really is a family and it really is a community,” Pemble said. “It’s something that’s been there for me throughout high school… I have friends from basketball, people that I know will have my back no matter what because we go out on the court and we compete together. It’s a sense of family that I don’t know you can get other places. At the end of the day I feel like [academic competitions] are individual competitions, and if you’re playing a team sport it’s just really different. The way you have to go out and really work together is something I don’t think you can get anywhere else and that’s the most special thing to me.”