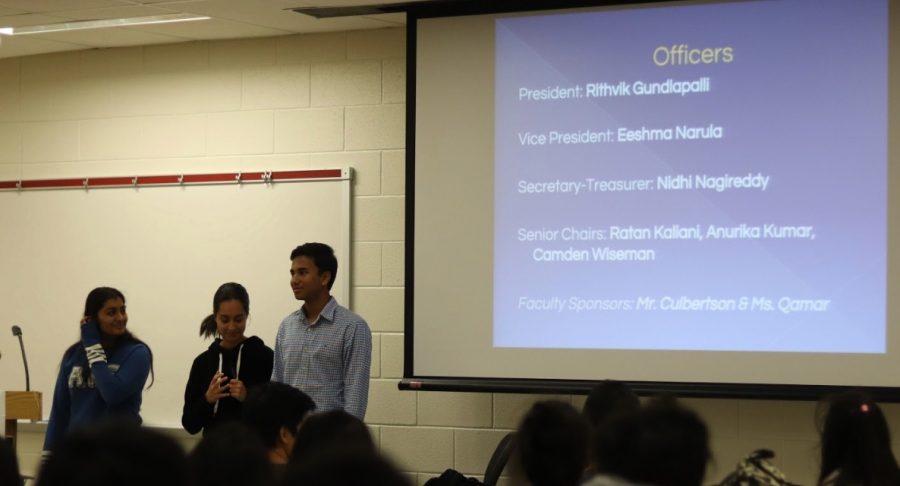 During the information session, seniors Anurika Kumar, Eeshma Narula, and Rithvik Gundlapalli, discussed NHS officer positions and responsibilities, as well as the application process for this year.

One of the most prestigious societies in the United States, the National Honor Society has more than 1 million students within its organization. The NHS was first founded in 1921 by the National Association of Secondary School Principals and has grown to have chapters in all 50 states.

On October 17, during both A and B blocks of 8th Period, NHS held information sessions to introduce the application process for the selective organization.

“NHS’s purpose is to create an environment where like minded peers in our student body can prosper. The qualities we look for in our members include: service oriented, hard working, academically advanced,” senior Anurika Kumar, Service Chair of the TJ NHS chapter, said.

The NHS is founded upon several tenets that it promotes amongst its members as well. The first pillar, scholarship, relates to academic qualifications, and its main goal is to promote commitment to academic excellence. The second pillar, character, is promoted to encourage the development of good character in students in secondary schools. In addition, leadership is supported as well, so that students can develop leadership skills to serve their communities, which ties into the fourth pillar of service, where students are encouraged and are obligated to give back to their community.

“The NHS is based on four pillars: scholarship, leadership, service, and character. NHS requires its members to complete service to the community, school, or other organizations every month as they represent their school towards the community as leaders. We want to bring a sense of service and leadership to our students and in turn spread those same qualities to our community and the world,” senior Ratan Kaliani, Director of Technology, said.

As NHS strives to promote service amongst its members, the four pillars are intertwined within each other and all relate to the community as a whole.

“Scholarship represents the academic achievement of each student and how they represent themselves in their classes. Leadership pertains to leading the way in one’s community in driving change to make the world a better place for those around them,” Kaliani said. “Service relates to altruistic actions that one completes in order to further the overall well-being of the community. Character is how one represents themself as an NHS member, whether that be through leading in one’s community, being a scholar in school or completing community service activities in and around their community.”

To ensure that the society runs smoothly, there are several positions within the NHS, including President, Vice President, Secretary-Treasurer, Director of Technology, and Service Chairs.

“[As the Service Chair], my role in all of this is I strive to carry out the NHS mission of providing such a platform for my peers, whether it be organizing school wide service events or aiding my community outside of school,” Kumar said.

In addition to Kumar, senior Camden Wiseman is the second Service Chair of the TJ NHS chapter. Wiseman coordinates monthly service events to help the community, as well as give members an opportunity to earn service hours, as mandated by NHS. Another officer position is the Director of Technology of the TJ NHS chapter, which is currently upheld by Kaliani, who is responsible for developing and maintaining the NHS website as well as social media presence. Kaliani also works on various projects to uphold the tenets of NHS, including Project BEST and STEMbassadors. Later in the session, the NHS officers discussed the application process for this year to be inducted into the NHS.

“The basic requirements for entrance to TJ’s NHS chapter are achieving and maintaining a 3.5 weighted GPA, volunteering for six hours the summer before you apply, holding leadership positions at TJ or in the local community, and having no academic integrity violations,” Wiseman said.

The application process for this year is competitive, and marked by several requirements. One requirement pertains to having an eligible GPA. In addition, other requirements relate to the student’s character and how NHS is a good fit for them.

“The first requirement for scholarship is fulfilled by having a 3.5 GPA. If students fulfill this requirement, they then fill out the official application which includes essays as to how students have demonstrated leadership, service and character within their lives and their communities. After submitting the application, the applications are read over in detail by a teacher panel including teachers from most of the major departments,” Kaliani said. “We send out decisions in early January after their submission by December 31st. Once the application is done, all accepted applicants are invited to TJ NHS induction in mid-January where they are inducted into our chapter. We look for students who have exemplified the four main pillars of NHS and are dedicated to improving their communities in the future.”

Many students find NHS fulfilling, and also a thriving environment in which to grow. The common goal of all of the students, which is to have the best character possible and to give back to their communities inspires each student to try their best, leading to close friendships that last even after high school. In addition, the various NHS projects allow members to build important skills as well, such as leadership and teamwork.