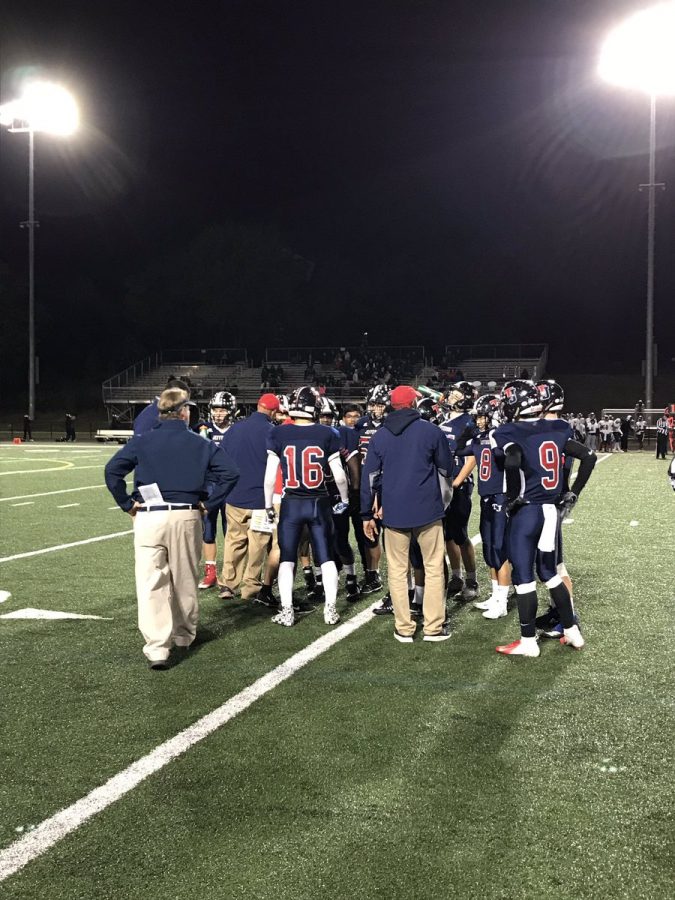 The team huddles up during the game against Justice

With the loss, the Colonials drop to 1-6.

The Colonials fell into a 22 point hole to begin the match, but put their first points on the board in the second quarter with a 16 yard touchdown run by running back Jun Chong (9).

“Giving up a touchdown to us in the first half was certainly something Justice did not expect, and they were clearly rattled by it,” Michael Auerbach, the Colonials’ offensive coordinator, said.

On the subsequent drive, the Colonials’ came up with a crucial red zone stop after Justice ran the kickoff to the 20 yard line. The defense limited the opposition to just two total yards over three downs and intercepted the attempted pass on fourth down to close out the first half.

“We’ve been improving on how to tackle, not miss tackles, and run to the ball. Rather than just the individual effort, the whole team moves as a unit on the field, and has group tackles and group runs,” Chong said.

Throughout the game the Colonials struggled to prevent long kickoff and punt returns by the opposition. As a result, despite several near stops on defense, the team could not stop the Wolverines from capitalizing on the favorable field positions with two touchdowns after the half to make the score 36-7.

“Improvement is there, but we can get better,” Bill Richen, the Colonials’ head coach, said.

“Our players battled right to the end of the game.  That same level of effort will be much more fruitful, not only in this week’s game, but in future seasons,” Auerbach said.

Senior Night and the Colonials’ final game of the season takes place this Friday night, Oct. 26th, at home against the Northern Virginia Kings.

“Obviously, it’s the last game I’m ever going to play, in high school at least. So I want to leave it all on the field. For all the seniors, too, it’s been a hard ride, it’s been a long one, and we just want to have a good ending to the season,” Chong said.