Waiting for the world to wake up 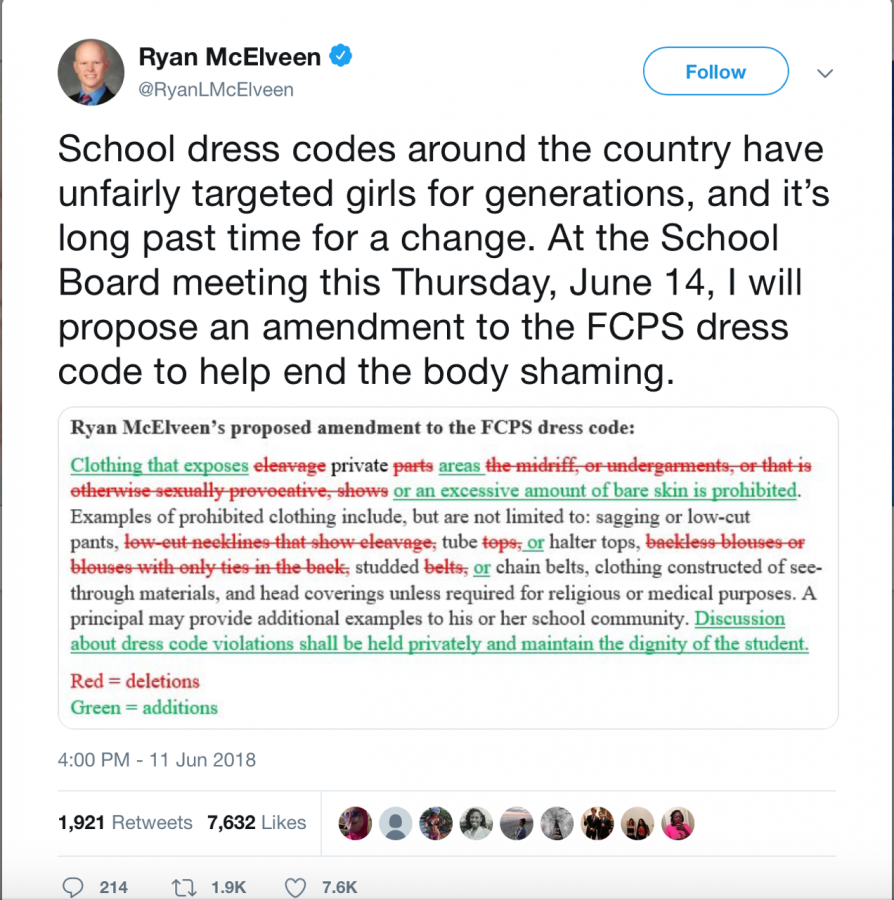 Ryan McElveen tweets his thoughts on the FCPS dress code

Respect. The word is thrown at us like a baseball, a pitcher to a batter. ‘Respect others, respect our learning environment, respect women.’ As students, we joke among ourselves, satirically pointing out each other’s clothing, calling them ‘distracting’. But what are we really saying? Why has this phrase become such a commonality in today’s society, and why is it mainly women that are subject to this phrase?

“You can take the superhero out of her costume, but you can never take away her superpowers,” Nike tweeted after Serena Williams’ black catsuit outfit was banned at the French Open.

Williams is a professional American tennis player who, with her unique style and approach to tennis, has won more Grand Slam singles than any male or female player. She recently underwent a difficult pregnancy, which resulted in severe and possibly life-threatening blood clots. Near the end of August, Williams attended a match at the French Open where she wore a  catsuit designed by Nike to help prevent blood clots. The outfit resembled an outfit worn by the warrior princess from the Marvel Comics movie, Black Panther. Not only did this outfit provide use in terms of medical problems, but it also made Williams feel stronger, representing the definition of female empowerment. Confident in herself and in her game, she won the match.

Despite her medical conditions as well as her previous accomplishments, Bernard Giudicelli, the president of the French Tennis Federation, placed a ban on the outfit.

“You have to respect the game and the place,” he said, claiming the outfit went too far. Again, in Giudicelli’s statement, there is that ruthless word, respect, calling out like a siren drawing in a lost sailor. It implies that the audience does not focus on the game, but rather the outfit. Williams’ incident is just one of the many representations of how society places their thoughts and judgments on women. We expected Williams to simply brush it off because this is how the world is for women today, and yet she didn’t. She instead responded to this criticism and made a statement by wearing a black tutu to the next match, and winning. This kind of judgment would have never been made had it been a male in this situation. The double standards present between men and women can clearly be seen, another example provided by Marcus High School in Texas.

A late summer day, Marcus High School released a dress code video. What they did not know was the havoc it would wreak on the world. The video featured a group of girls wearing clothing not considered school appropriate being reprimanded by a teacher with the song “Bad Girls” by MIA playing in the background. It made no reference to a dress code for boys whatsoever. Although the school’s principal apologized, this video never should have been thought of as a good representation of high school dress code in the first place. The idea of this video goes to show how current day society thinks of women.

I have seen this type of sexism even in TJ. I understand that high school should and does have a dress code, but shouldn’t this dress code apply to both men and women? It is 2018, yet we are still focusing on what women wear, still over-sexualizing girls without considering the boys who come to school wearing tank tops, sagging pants, or even, on days such as spirit days, wearing no shirt.

When a girl wakes up, the first thought that goes through her head should not concern the views and stereotypes that society places upon women. Even at such a young age, girls are judged, evaluated, and shaped to think that we have to fit a certain standard. We feel powerless, we feel ashamed, and no women should ever have to feel like that. The Fairfax County Public Schools County Board has finally made some well-needed changes by recently passing a dress code that addresses both males and females without the use of body-shaming, with Ryan McElveen greatly advocating for this issue of singling out women in dress codes.

“School dress codes around the country have unfairly targeted girls for generations, and it’s long past time for a change… help end the body shaming,” writes McElveen on Twitter. We have finally woken up, and it is time for the rest of the world to wake up too.