What to know about the upcoming PISA test 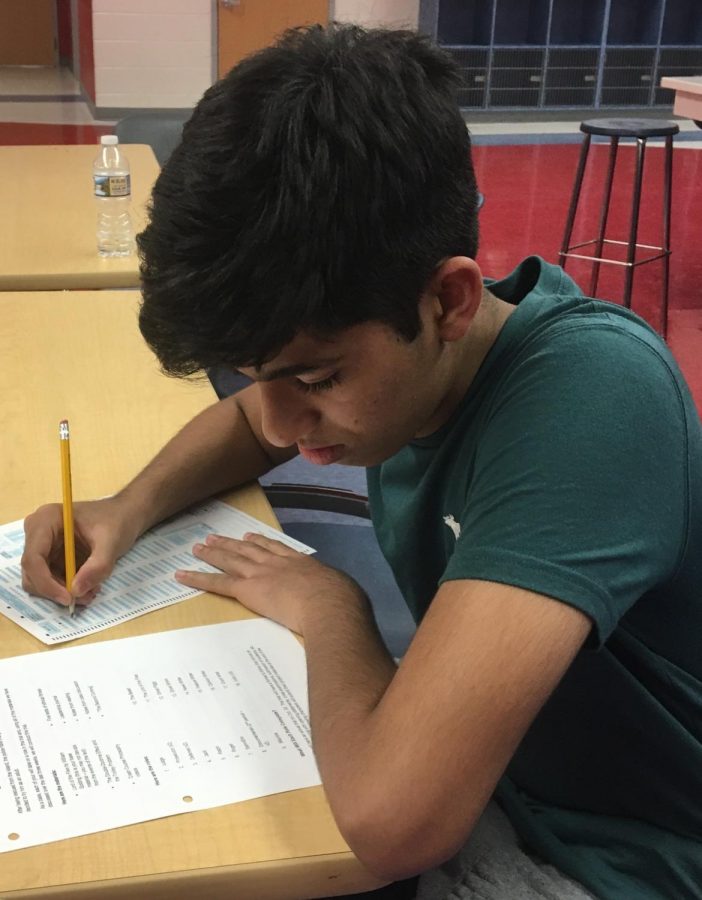 On November 9th, 85 students at Jefferson will be chosen to take the PISA test. Here, Vasav Nair, a 10th Grader at Jefferson, is seen taking a standardized assessment.

In early November, 85 students, mostly sophomores, will be randomly selected to participate in the OECD Test for Schools, which is based on the Programme for International Student Assessment (PISA). This test is used to provide school-level results that can be compared to schools both nationally and across the globe. The assessment is used in over sixty countries to test the performance of their students in subject areas such as math, science, reading and other problem-solving skills.

The OECD test has been administered every three years since 2000. This year, the test is simply a practice test for Fairfax County to prepare schools for the official worldwide assessment next year. Leslie Barnhart, the assessment coach at Jefferson, believes that the OECD test is useful because it is distinct from the other standardized tests students take.

“It gives more of a bigger picture of where we are, as opposed to the SOLs, which are state specific. This test is more of an international standard,” Barnhart said.

When the test was last administered in 2015, schools across the United States ranked 24th, 36th, and 28th in reading, math, and science, respectively. Asian nations, once again, led the rankings in all categories, with Singapore performing the best in all three categories. These results prompted questions about the direction of the education system in the United States and made restructuring the curriculum a priority.

The test is randomly assigned to students in a specific age group, to ensure that it obtains results from students who vary in ethnic and economic backgrounds.

“[The test] is not just going to compare where you are to other schools, but where you are compared to other people who are just like you,” Barnhart said.

Jefferson, consistently ranked in the top ten high schools in the US by U.S. News and World Report, is expected to perform well on the assessment.

Looking at a sample of the OECD, the exam is comprised of both multiple-choice and free response questions, where PISA is looking to examine student’s critical thinking and problem solving skills.

Jefferson students have the option to opt-out if they choose to. If a student decides that he or she wants to drop out, they must fill out a form that was sent to their parents or guardians email address by November 2nd.

All in all, the test should be used as an opportunity for schools across FCPS to reexamine their standardized curriculum. “What [FCPS] is trying to do is get a feel for is where are we in accordance to rest of the world, that we might need to change what our curriculum looks like, going forward,” Barnhart said.