TJ field hockey’s efforts in wake of the July 24 tornado proves that their determination and perseverance as a team can take them far. 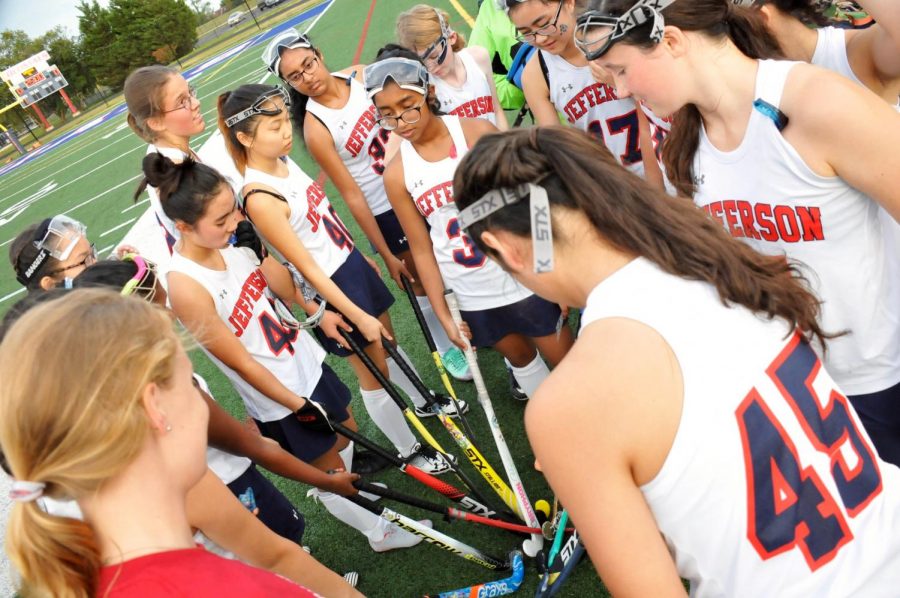 Listening intently, the JV field hockey team huddles around the coach, Allie Ivener, before a game.

Far before many of us were awake on the last Tuesday of July, a scene right out of the Wizard of Oz came to life. A tornado touched down near the softball field destroying both the softball sports shed and the field hockey goals. Most of the equipment was broken and the softball batting cage was in ruins.

Sophomore Alexandra Friedman, a player on both the varsity softball and varsity field hockey teams said, “Both of the sports I play were affected. The tornado picked up the softball shed and knocked it into the field hockey goals.”

Nevertheless, the athletic boosters came to the rescue. They were proactive in fixing the field and providing practice goals for the field hockey team.

“We were really grateful as it let us continue practicing and didn’t throw off our season too much,” Friedman said. Although these goals were given to them, the team still had a long way to go until they had everything they needed for the season.

“After [the tornado], the academic boosters were able to promptly provide us with new practice goals, but they were practice goals so we couldn’t use them in the games.” said sophomore and JV field hockey player, Arisa Chue.

The money allocated for field hockey this season was used to buy game goals instead. This unexpected purchase led to a deficit in the budget and required the team to put in some serious fundraising efforts in order to be prepared for the other team events such as goalie equipment and uniforms.

“We had this event called a shoot-a-thon,” said Chue, “where each player had ten balls to shoot into the goal, and each player had a website where others could donate a flat amount or donate a certain amount of money for every goal made.”

This fundraiser alone raised a whopping $6,876, with personal donations added on top of that. The team also conducted a fundraiser with Pupatella, a local restaurant. With the revenue from the two fundraisers combined, there was more than enough money for the team to survive the season. With the new surplus, they were able to order more spirit wear, like jackets and T-shirts, as well as donate some money to the American Cancer Society. However, one thing that the team was not used to paying for, was the senior night shirt.

“For senior night, because of the lack of money from the tornado, players had to pay for the senior night t-shirts when we usually don’t have to,” said Chue.

For some on the team, the experience was an unconventional approach to team bonding. Although the tornado and lack of money was a setback, varsity player, Yukta Chidanandan, says that her senior experience was better with the fundraising, especially since they got the community involved.

“We actually got a lot of support from family and friends. In the past, our fundraising hasn’t necessarily been as fun, but [this year] we changed our fundraiser a little bit to make it more inclusive of community members outside the team.” Chidanandan said.

Chue also agrees that others’ contributions  were essential to the team’s efforts. “Several parents had to donate more this year [than any other year],” she said.

Overall, this ordeal had a happy and memorable ending due to the determination and resilience of the players, coaches, and the contribution of friends and family.

“This season was best the field hockey team we’ve had at TJ in the past 4 years, and I’m a little emotional about that,” said Chidanandan.