The class of 2022 experience their first pep rallies. 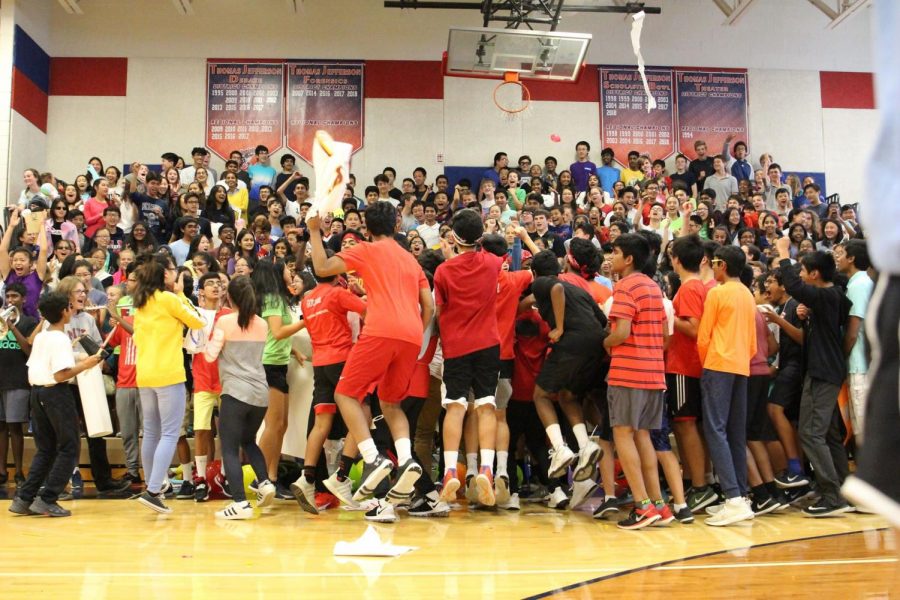 Thursday, October 4. The first homecoming pep rally and the beginning of another milestone for the freshmen class of 2022. As freshmen, the class of 2022 had little to no idea what to expect.

“I [thought] pep rallies [were] just going to be seniors yelling crazy things, lots of kids yelling cheers, and freshmen trying to fit in.” freshman Lexi Sung said before the first pep rally.

The pep rallies proved confusing, with most of the freshmen remaining silent or even cheering during roll call. The confusion was especially pronounced on the day of the first pep rally, with almost none of the freshmen participating in the chants or knowing what to do because this was a new experience for them.

The other classes had predetermined chants and roll calls ready, which forced the freshmen to quickly scramble to find chants. One major struggle was chanting in unison and coordinating for roll call performances.

Furthermore, the freshmen did not know the roll calls until the day before or even the day of, which led to mass confusion and problems during the pep rally, especially when the audio to their roll call did not play on one of the days.

Freshmen Caroline Chen, a member of the FroshComm said, “I think we got better throughout the days, but there’s still definitely a lot of room for improvement. The organization was off and all of the planning tended to be last minute because it was Froshcomm’s first hoco too. But, we’ll be more prepared for next year and everyone is now familiar with hoco.”

While later pep rallies were better attempts, none truly reached the same level of organization as the other classes. Of course, as freshmen it is hard to win a pep rally, but it can still be done, as the previous year the Class of 2021, nicknamed the “Freshest Freshmen,” won a pep rally during last year’s homecoming spirit week.

Although the freshmen were not successful at winning this year, they will definitely do better next year and hopefully win a pep rally. Homecoming week is a time of fun and competition, but also an important time to come together as a school and show school spirit.