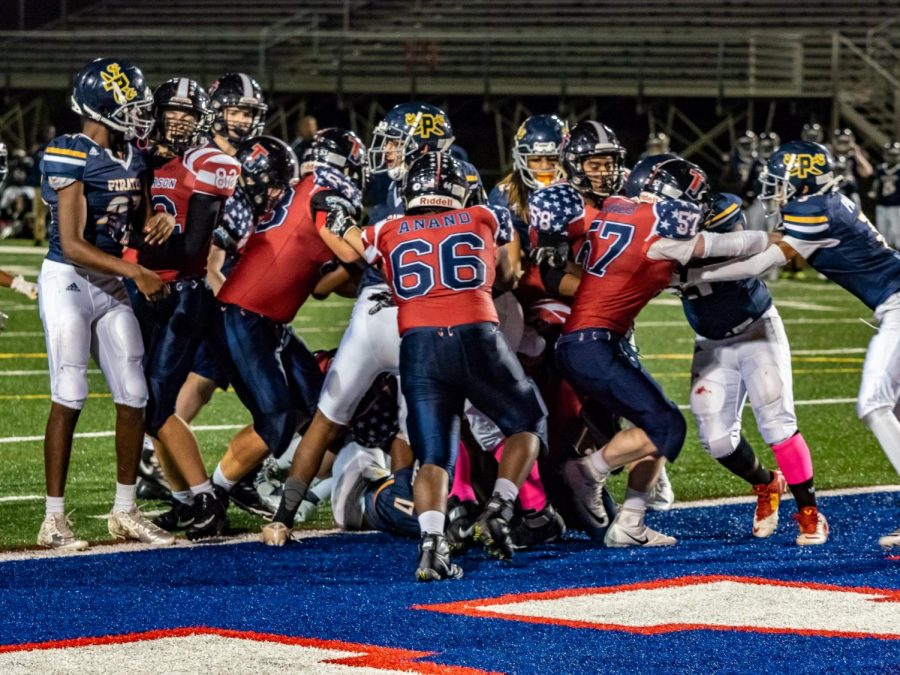 The Colonials score the winning touchdown in double overtime

The game, one of the most highly attended matches of the year, was the Colonials’ first win of the season and their second win in two years after the previous year’s Homecoming game.

“We really thought we had a chance to win and that’s what our main goal was going in. We wouldn’t accept anything less than it, and we pulled through,” linebacker Niko Economos (24) said.

According to defensive back Sihun Kim (8), the team needs to work on consistently playing with intensity and as a team, and these issues led to a initial 12-0 deficit in the first half.

The Colonials narrowed the deficit to 6 with a touchdown 2 minutes before the half, but after a short drive down the field, Paul Charter extended the gap back to 12 with a touchdown in the dying seconds of the half.

“We kind of screwed up the first half, and that wasn’t good. We should come out a lot stronger,” offensive and defensive lineman Jason Xu (65) said.

Throughout the game, the Colonials had significant success rushing the passer, and in the third quarter, the defense forced a string of turnovers, including three turnovers in a row, to keep the ball in the opposition’s half for a large majority of the quarter.

“We really held it down on defense,” Economos said.

However, the offense struggled to capitalize on the favorable field position and did not score their second touchdown of the game until the last minute of the third quarter.

Shortly after, the Pirates returned the subsequent kickoff the Colonials’ one yard line and successfully scored a touchdown and 2-point conversion to go up 28-12.

“Though we were down by double digits, the team kept fighting, and the crowd was involved the whole time,” junior Saketh Gabbita said.

In the fourth quarter, the Colonials came back with two touchdowns, at 8 minutes and 4 minutes, to tie the game 26-26. Both teams failed to score further in regular time and proceeded to overtime.

“Once we tied up and went into overtime, our entire crowd got so tense and the atmosphere really shifted,” senior Otilia Danalache said.

The Colonials started at the opposition’s 10 yard line with four downs to score a touchdown. Overtime rules dictate that whichever team scores and the other team does not after both teams have an equal number of possessions wins.

On the Colonials first chance to score, quarterback Sohail Mohanty (4) threw an interception to turn the ball over. However, the crowd’s cheering muffled the opposing QB’s sign to snap the ball, forcing several false starts and 3rd & 30. Backed up, the Pirates could not score, and the Colonials intercepted the ball on Paul Charter’s next opportunity.

“The overtime procedure was kind of confusing to me at first, but people were explaining it, and I remember getting so invested in the final plays and how loudly we all cheered when we were trying to distract the other team,” Danalache said.

Running back Jun Chong (9) started out the drive by gaining a large chunk of yardage, and on the next play, the Colonials drilled the ball into the end zone to win the game 32-26.

“We had been screaming a whole lot, especially when the opposing team was on defense, so we were already very hyped about what was going on. Once we scored, it just took that to a whole nother level,” Gabbita said.

Fans rushed the field after the winning score.

“I was honestly just so happy for the team because I know how hard they work and how much they deserved this. It was just a great feeling for me as a spectator, seeing everyone jump over the fence and storming the field as we celebrated the teams success,” Danalache said.

The Colonials play Justice High School next Friday night at home. They will then cap off their season on Oct. 19 against the Northern Virginia Kings, who they beat in last year’s homecoming game.

“It’s our first win this season, it’s definitely not going to be our last,” Xu said.