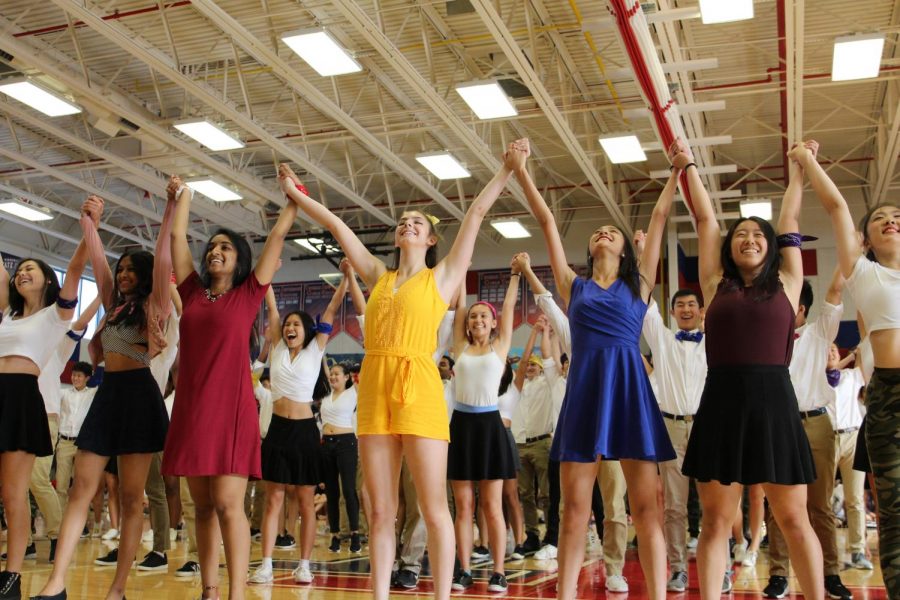 The senior class of 2019 finish their last MEX performance in style. Photo courtesy of Mijin Cho.

The Jefferson administration made several major cuts to the musical extravaganza (MEX) performances of the freshman, sophomore, junior, and senior classes in the weeks leading up to the final pep rally. Though the administration cited safety issues as the primary reason behind their decisions to eliminate the class of 2020’s colorguard act and various stunts from all the classes, the cuts have faced severe backlash from the student body. Through safety checks, the administration was able to preview each classes’ act and evaluate the safety of them. MEX is one of the highlights of homecoming season, and the safety cuts have affected many MEX acts and students.

“Many of these changes including the safety checks were incorporated due to students getting seriously hurt,” assistant principal Shawn Frank said. “Many students who participate in MEX performances do not have formal training in dance nor participate in all the practices consistently. During rehearsals students often drop dance partners on basic moves.”

Some students were disappointed by the safety cuts.

“They cut the stunt where I get yeeted into the air so now we have nothing in place and MEX just looks boring.” senior Eliot Liu said.

Although many students participating in MEX agree that the safety concern that comes with such performances is a valid reason for stunt and act cuts, those who have experience in dance, cheer, gymnastics, and colorguard still were not allowed to do skill-based stunts.

Sophomore Rose Du, one of the class of 2021’s MEX choreographers, said that those who are experienced enough to perform stunts should be allowed to do them.

“Especially for people on dance, color guard, and cheer, I think cutting out moves that we practice day in and day out is quite outrageous, considering there is an extremely low risk that an injury will occur,” Du said.

TJ Cheer annually performs a routine during the pep rally that involves stunts that normal students wouldn’t be able to pull off.

“As a cheerleader, we were extremely worried that we wouldn’t be able to perform our routine with our regular stunts. Thankfully, that has been straightened out but we still aren’t allowed to do stunts during MEX. While it’s understandable that doing cheer not on our usual mat might be dangerous, we are also allowed to stunt on the track outside and on grass while abiding by VHSL requirements. So there really is no difference between those times and stunting during MEX.” Senior Julia Martinez said.

Despite angering some students, the administration did not want anyone to get injured during MEX practices or the actual performance.

“There is not consistent participation in MEX practices, so students do not know the routines which can lead to someone getting injured.” Frank said. “We want students to have fun and enjoy homecoming because it’s among the top highlights for students.  However, we also have to make sure students do it in a manner that does not lead to someone hurting themselves or putting others in harm’s way knowingly.”

Many students still enjoyed this year’s MEX, even without certain stunts.

“I’m proud of our class’s MEX! Out of all MEXs, I enjoyed the junior one the most because of the plot and the huge variety of dances.” sophomore Evans Chun said. Students enjoyed the performances given by all the classes.

“Every class was really great this year, and I can’t wait till next year!” sophomore Katalin Budinszky said.