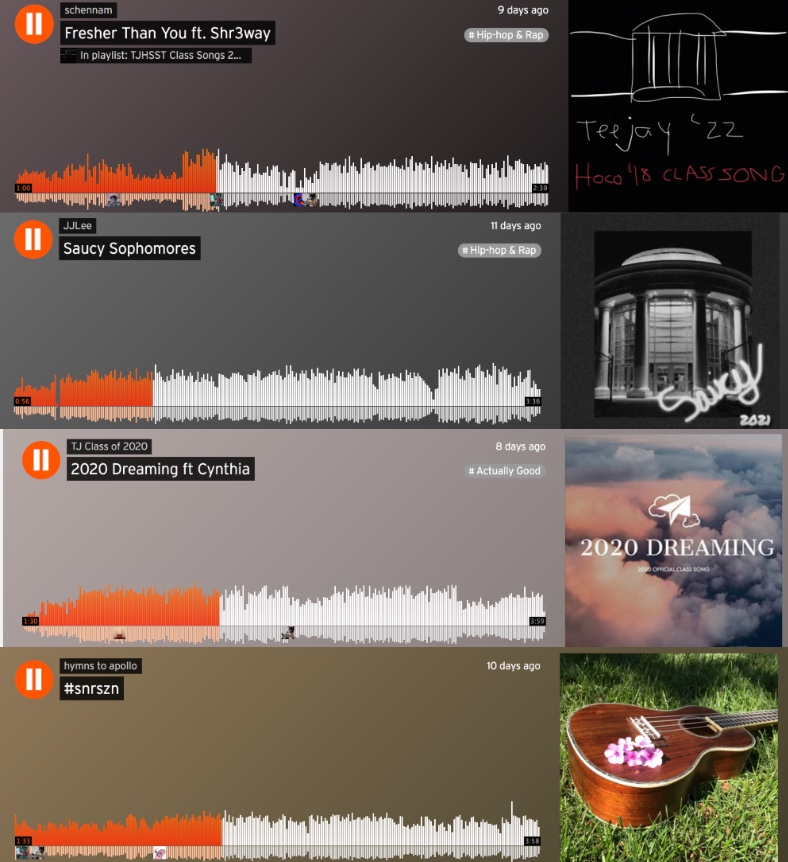 Each class’s song uploaded their tracks to SoundCloud. With different musical styles, titles, and cover photos, each class represents itself in a unique way.

Through music, classes can come together and express themselves creatively. Last year’s Freshest Freshmen from the class of 2021 and other classes’ diss tracks created a naturally competitive environment, inspiring a new homecoming event. Class of 2019 president Aaraj Vij first came up with the idea of class song as an event in response to these trends from last year.

“Last year, I thought it was really cool with all the classes coming up with songs and diss tracks on their own,” Vij said. “I came up with the idea because I thought, ‘hey, it would be pretty cool if this were a hoco event.’”

Vij believed that the addition of a class song would be an effective way for people with musical interests to actively participate in homecoming.

“I think that class song is another avenue for homecoming that was not really captured with the existing homecoming events,” Vij said. “We had canned food sculpture, which is a great event for charity, and float, a construction event, which are great if you’re into that kind of thing, but we also have a lot of musically talented ppl at TJ. I thought that making class song a homecoming event would be a great way for them to participate in hoco festivities.”

In order to begin making the prospect of class song a reality, Vij started by gauging interest for such an event in the Jefferson community.

“I made a post in the official 2019 group asking, ‘would you all be interested in making class song an official homecoming event?’ and it received a lot of support,” Vij said.

From there, Vij and senior Vikrant Magadi began drafting a proposal detailing the class song event.

“The homecoming packet details all the rules of the event (how they operate, how they’re judged) so Vikrant and I worked on formulating these rules,” Vij said. “[This included] coming up with a time limit, an audio format for it to be uploaded, and different guidelines for what the song should be.”

After creating these rules, the proposal had to get approved by sponsors and student government members.

“After we came up with a set of rules, we presented it at the homecoming packet meeting, a meeting held in June to propose amendments to the packet.” Vij said. “There, we discussed it with all the student leadership members as well as class sponsors, reviewed the proposal, and received insight on how to edit the packet and the rules that we had drafted.”

The final step was voting on the drafted proposal which would officially amend the homecoming packet to include class song. Most people were in support of adding class song to the existing homecoming events.

“[The idea of a class song] was very popular among our class and other class councils were all in support of it as well; it received a lot of votes in favor of making it an official event,” Vij said.

SGA Treasurer Mia Yang reflects on the effect the addition of class song will have on class spirit and participation.

“It definitely serves to promote class unity, since you’re making a song about how great your class is, even as it stirs up friendly competition with the other classes,” Yang said. “Overall, creating a class song is a creative process that requires the talents of many class members and I think it involves more people with homecoming festivities.”

This class unity and spirit culminated in the creation of four unique songs. After tough decisions were made, SGA posted results of the competition on Wednesday, October 11. 2021’s class song ultimately came in first, followed by 2020, 2019, and 2022 in 2nd, 3rd, and 4th place, respectively.