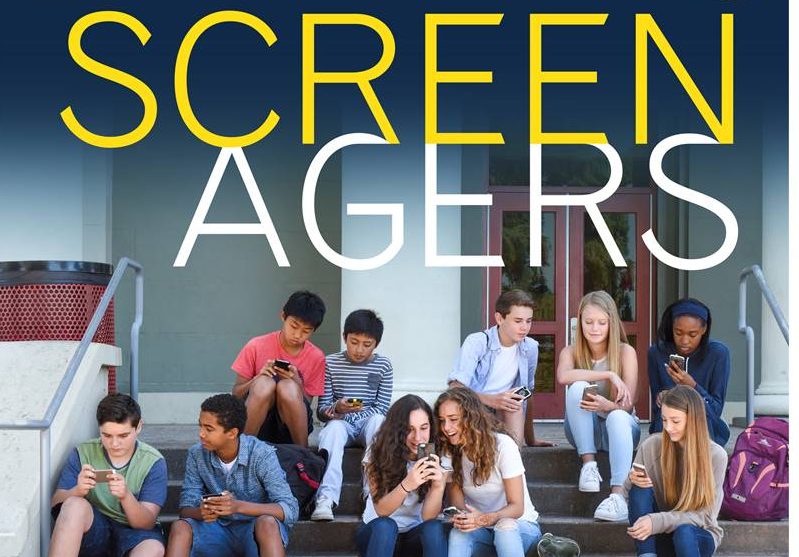 A promotional image for the ScreenAgers documentary.

The ScreenAgers documentary will be viewed at Thomas Jefferson High School for Science and Technology (TJHSST) on Thursday, Oct. 11, at 6:30 p.m.
ScreenAgers is about the health and psychological effects of excessive screen use and includes suggestions for parents to contend with them. The viewing at TJHSST is the second of several the Virginia Chapter of the American Academy of Pediatrics (AAP) plans to host in Fairfax County over the next year.
“The reason why we wanted to show it in the first place was that we know, in our offices, often times we’ll see families struggling with how to manage screen time,” Sandy Chung, pediatrician and president at the Va. Chapter of the AAP, said.
According to one survey, 53 percent of students feel that they are addicted to their mobile devices. Parents are looking for ways to curb this statistic.
“The mistake that parents often make is that they assert their authority without explaining it in a way that makes sense to their child,” Temple University professor Laurance Steinberg said in the official ScreenAgers trailer released on Nov. 24, 2015.
Pediatricians used to recommend a maximum of two hours of screen time a day, including screen time at school or work. However, students spend an average of six and a half hours on screens outside of school and work environments.
“Instead what we’re focusing on is trying to make sure we’re using [technology] as necessary, but not to the point where people are becoming addicted to it.”
Research shows that becoming addicted to screens is possible. Using an electronic device stimulates the brain’s reward system the same way using drugs or alcohol would.
“I think that we all need to be aware of how pervasive screens are in our lives,” Chung said, “and to make sure that we’re thinking about how to use them responsibly and how they affect our health and wellbeing.”