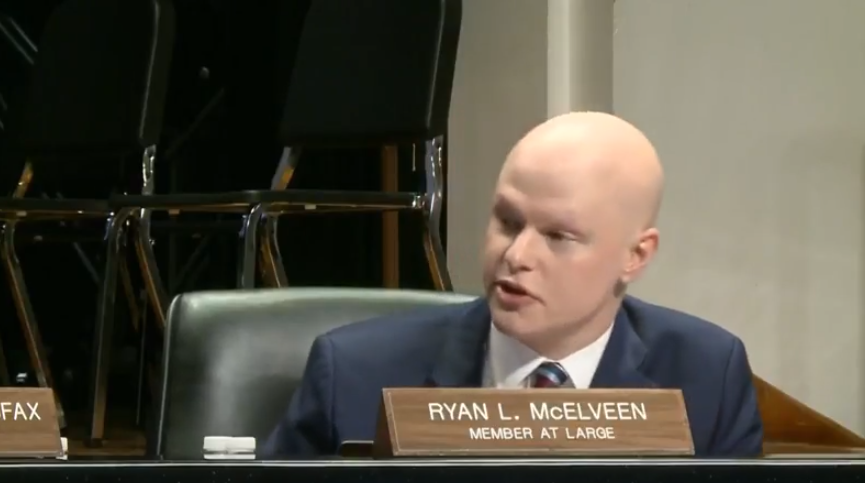 Ryan McElveen proposes the resolution. Courtesy of @RyanLMcElveen on Twitter.

At FCPS’ second regular board meeting of the school year, Board Member Ryan McElveen came forward with the resolution that emphasized the faculty’s role which was to be voted on at the meeting.

“Our responsibility as a school system is unique because in the most formative years of students lives, we have the ability to teach them the value of respecting others and the difference between right and wrong,” says McElveen.

According to the official resolution, 14.2 percent of students in the 2017-18 school year reported they were sexually harassed. This percent of the 186,785 students in FCPS approximates to around 26,523 students who reported harassment.

“I mean, is it bad to say I’m not really surprised? The proportion does seem right compared to the happenings of today, but it’s just really worrying to me that these numbers are too high to just include high school students,” says senior Priyanka Mehta.

A key point in the resolution states that the public school program must instate a cultural change that allows educated students and teachers to communicate openly to uphold the FCPS policy regarding sexual misconduct.

“The thing is- every person who wants to touch someone without their consent probably knows it’s not right. I appreciate the sentiment but I think it’s naive of FCPS to think that they can fix a mindset; I just don’t really see how this is going to help much,” says Mehta.

Also mentioned in the resolution, FCPS will now hold those who do not report misconduct in a timely manner accountable. Bystander apathy could be punishable, causing a large shift in the way sexual harassment is handled.

“The job of the school system shouldn’t be to punish people who don’t report sexual assault- because of apathy or because the victim does not want them to- it should be to prevent it altogether,” says freshman Vivikta Rao.

FCPS hopes to uphold current measures through constant execution; this means anonymous surveys, sexual prevention education, and its policy to launch investigations immediately after allegations are brought up.

“They say the same thing every couple of years, that they’re going to increase investigations, and you know what? It continues to be a problem, and people just don’t say a lot about it because it reflects badly on the county,” says senior Dany Matar.

For all members of FCPS, students and teachers alike, this resolution affects how we handle sexual misconduct in the wake of the public discourse surrounding us.