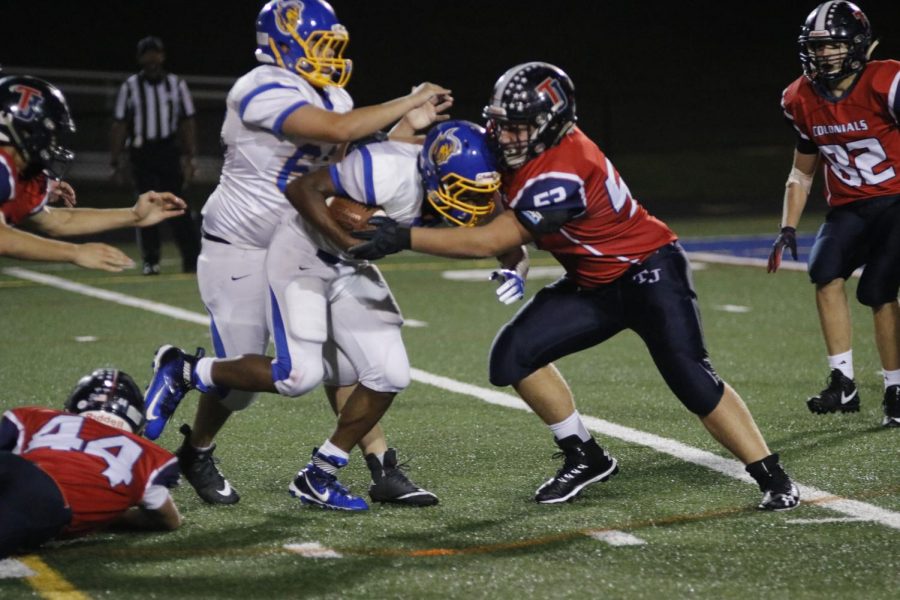 The Colonials defend the run in the end zone

The Jefferson Colonials football team lost to the Lee High School Lancers 41-12 at home Friday night. The game was played following events for the Back To School Bash.

On the very first drive of the game, the Colonials forced a fumble on a blocked punt recovered by a Lee player. They promptly drove down the field to the opposition’s half, but failed to convert on fourth down at the 30 yard line.

The Colonials struggled to move the ball on further drives, and following the turnover on downs, the Lancers took just 20 seconds off the clock to drive down the field for a touchdown.

While the Lancers continued to put points on the board throughout the game, the Colonials remained scoreless until 11 minutes left in the game while trailing 34-0.

Quarterback Sohail Mohanty (no. 4) threw a short pass into the end zone to tight end Caden Phillips (no. 44) and followed the touchdown up with another one in the final minutes of the game to Evan London.

Turnovers, which included two pick-sixes and a fumble within the Colonials’ own 20 yard line, plagued the colonials. As a result, the Colonials were occasionally forced to start defensive drives in their own red zone.

“We still need to get better at red zone defense and cut down on turnovers,” wide receiver and linebacker Walker Haynes (no. 5) said.

Throughout the game, Colonial defenders had difficulty preventing Lee receivers from gaining a large number of yards after the catch.

“I think we need to improve on not making the little mistakes, such as missed tackles,” offensive and defensive lineman Greg Harrison (no. 55) said.

Despite a tough match, the Colonials continue to improve in key aspects of the game as the season progresses.

“While we need to get better, there is noticeable improvement since the beginning of the season. Tackling is much improved and we showed that we can move the ball on offense and get stops on defense.” Haynes said.

The Colonials’ first touchdown of the game, in garbage time, was a key example of these improvements.

Having followed the Back to School Bash, the game was one of the most highly attended matches of the season.

“Even though TJ didn’t do too good, everyone was just so happy,” freshman and first-time watcher Kareem Jaber said. “Everyone was cheering for the team, and it just really shows our school spirit and how much we love our school.