Amendments to Money Wars Made After Controversy Over Transparency 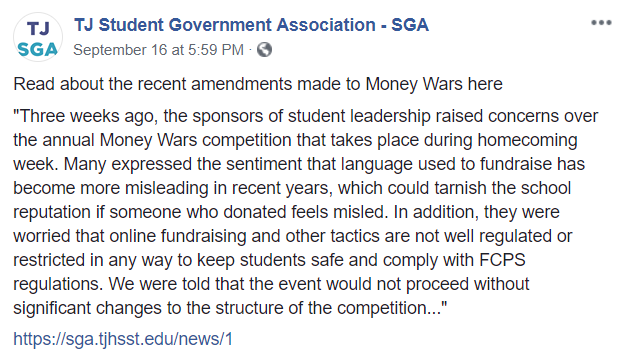 As concerns over safety and fairness grow within the “Money Wars” competition, an annual competition that raises money to donate to charitable organizations, class sponsors and Student Government Association (SGA) have decided to add several amendments to increase the transparency of the contest. Key among the changes are the elimination of door-to-door fundraising as a valid means of collecting money and the shift toward using an online platform to raise money.

To understand the complexity associated with “Money Wars,” it is important to acknowledge the difference between what Fairfax County Public Schools (FCPS) refers to as a charity drive and a fundraiser. A fundraiser collects money that directly benefits the school, while a charity drive donates money to a third party. “Money Wars” is classified as a charity drive, so it must be investigated by the FCPS Risk Management Team in order to confirm its validity.

“They have to vet the charities that you guys want to donate to,” Finance Technician Danielle Sayre said, “to make sure that they are charities that FCPS is okay with us donating to.”

Although FCPS does not ban the practice of door-to-door fundraising for high school students in general, class sponsors felt that a lack of transparency in how the money was raised in previous years required some measure of regulation. Thus, SGA passed amendments specific to Jefferson and “Money Wars”.

“The individual class council sponsors had a lot of concerns over some of the fundraising tactics that were used,” SGA president Neil Kothari said. “[Concerns over transparency] came from [Facebook] posts in an alumni group,” Kothari said. “Our individual class councils were asking the alumni to donate, and they didn’t necessarily include ‘this is a part of our homecoming competition [in the message],’ which is where certain sponsors may have felt that there was misleading information there.”

While this format of raising money was not explicitly prohibited by SGA rules at the time, the class sponsors felt uncomfortable with the tactics used and with the amount of work required to run it, eventually asking Dr. Ann Bonitatibus to remove Money Wars entirely from Jefferson’s Homecoming. However, Bonitatibus was in favor of fixing certain rules rather than eliminating the competition entirely.

“Because our students want to do something good and charitable, we just need to find the right way to do it,” Bonitatibus said. “Many times, it’s not if we can do it, but how can we do it.”

Not only did the requests for removal get refused by Bonitatibus, it faced backlash from a number of students.

“I spoke to administrators and representatives of classes, and a lot of them said that it was just becoming a headache, and it was too much paperwork. They were in favor of banning it, and to me, I just felt so heartbroken by that statement,” 2019 “Money Wars” coordinator Otilia Danalache said. “What kind of message do we send to TJ if we just choose the easy way out instead of fostering this incredible, competitive spirit and this incredible spike [in] donations by banning it?”

While students may not agree with some of the changes being made to this event, a major aspect of the competition still remains the same since the process of collecting the money has been largely left unchanged.

“It’s going to be the same processes [as] last year. In the audlob, we’re going to have [cubbies with] the glass sheets, and the locks and the zip ties,” Kothari said.

A minor change comes in the form of an online platform that would also accept donations. SGA hoped that the online donation platform would level the playing field in how students gather funds.

At the end of the day, amidst the mix of old traditions and new regulations, Danalache hoped that the overarching goal of “Money Wars” was not lost amidst the competitive aspect of the event. Though this event provides each class an opportunity to win points during Homecoming, its purpose is to donate money to an important cause.

“I know it’s really easy to get tripped up in this competitive spirit, but honestly you have to step out of that and look at it overall,” Danalache said. “Donating money to charity is a good thing, and if we’re spending an entire week on creating this grade-to-grade competition, which can get really cutthroat, we have to remember that this competition should be used to foster something positive.”

If you would like more information about FCPS regulations on specific monetary activities, follow the links below.