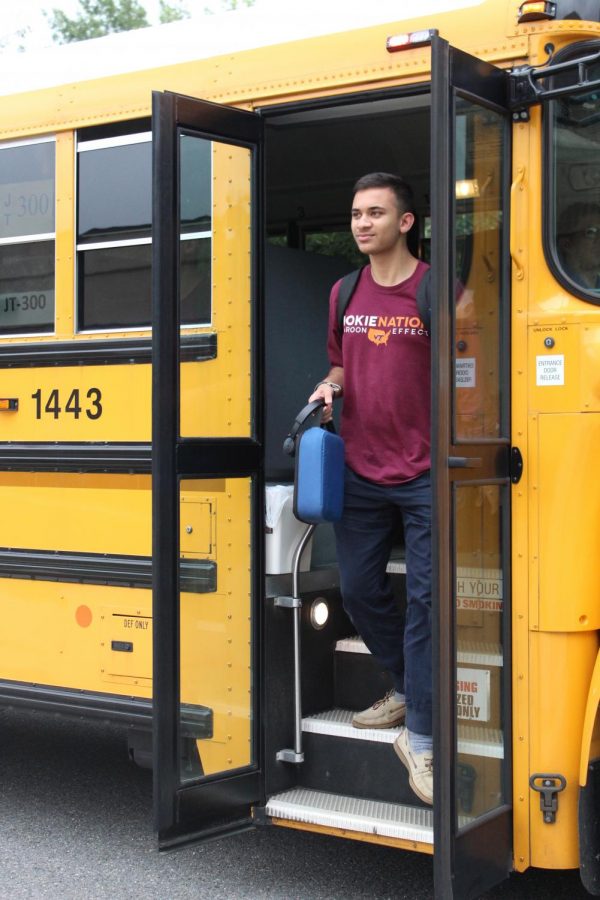 Senior Dheeraj Jassal exits his bus depot. With the elimination of neighborhood stops, Jassal is now forced to travel for a longer period of time daily.

Due to long, exhausting commutes to and from Jefferson lasting anywhere from 30 minutes to over an hour, parents of several students rallied together and proposed to reroute existing bus routes in order to get their kids home at an earlier time. As a result, administrators of Fairfax County Public Schools decided to reroute Jefferson’s bus routes as requested. The decision, however, took many others by surprise, as it left a number of students with far greater problems than before as neighborhood bus stops were completely eliminated. Senior Dheeraj Jassal was one of many students impacted by the sudden change as he heavily relied on neighborhood bus stops throughout his days at Jefferson to go home from school.

“Since my freshman year until my junior year, neighborhood bus stops have been a really accommodating option for me to get home,” Jassal said. “My commute from TJ to my house is more than an hour each way, so just being able to stay on the bus after school has been a lot easier than having to make sure my parent are there to pick me up from my bus depot every evening.”

However, Jassal now faces the problem of getting home and looks to alternative options once he arrives at his designated depot stop. Though his parents are able to provide transportation from his bus depot, Union Mill Elementary, to his home, Jassal notes how it could take an additional 5 to 20 minutes to get home, compared to previous years when the bus dropped him off right in front of his house.

“When neighborhood bus stops were canceled, my family had to find new ways for me to get home from my bus depot and sometimes I have to stay at my depot for a while until I can get a ride home,” Jassal said.

Despite this, Jassal has found a way to overcome this issue and does everything in his power to avoid the problem as much as possible.

“I just got my driver’s license and a parking pass so I’m just going to drive from school and back home, but I wish we still had [neighborhood bus stops] as an option though because sometimes I might not be able to drive, and then I’d run into the same waiting issue,” Jassal said.

Jassal also wishes, like many other students, to reinstate the neighborhood bus stops knowing how much of an impact it had already caused and will continue to cause on the lives of many students at Jefferson.

“I definitely hope neighborhood buses aren’t completely out of the picture. Although I am a senior, having neighborhood stops has been a huge lifesaver for my family and I in terms of getting home because they don’t have the option of driving.”

In response to those who wish to bring back neighborhood bus stops, however, Mr. McCormick, the security director at Jefferson and supervisor of the school’s bus transportations, remains resolved on the county’s decision.

“Parents from this school petitioned them to change the way the routing was based on the length of times of routes that students were on their buses,” McCormick said. “The end result wasn’t to save the huge amount money, but it was the parents from this school that solicited [for a change in neighborhood routes].”

On the other hand, many students at Jefferson believe that the county’s decision should be overturned citing the few benefits achieved with this policy and stressing the importance of having neighborhood bus stops as an available option for all students.

“Unfortunately, I don’t think there are too many positive aspects of getting rid of neighborhood buses,” Jassal said. “I do see how the neighborhood bus option could pose a financial burden on the county, but they are a highly valued and utilized transportation option for the TJ community and especially students who have really long commutes.”